posted in Beach Bits, Bug, Niece-com-poops, Tis the Season on November 1, 2007 by SAJ 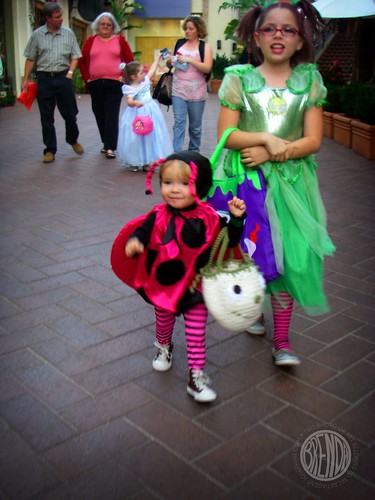 Halloween was a BLAST. I’m kinda worried about Christmas now. It’s a good thing we’re going out of town because I do not think I can top this last week’s fun with a tree and some presents. I loved Halloween this year. We did so much and Baby Bug’s little firecracker personality really shot my fun quotient to the stars. 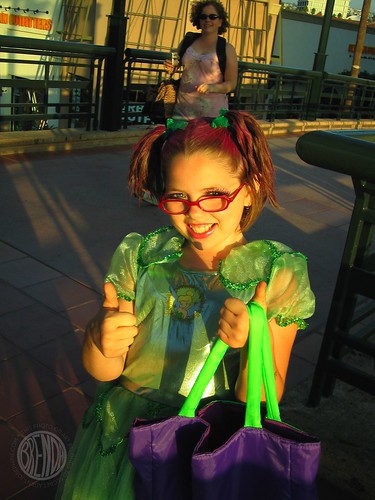 I decided to invite my nieces to trick-or-treat with us this year. Firstly because I looooove my nieces and secondly because my neighborhood rocks. The ratio of candy to kids is significantly heavier on the candy side. People stand at their doors calling out to you to come and take handfuls. I don’t know if this is because everyone and their Aunt is on a no-sugar-no-carb diet or if there really aren’t that many kids trick or treating. Either way, we ended up with more candy than any of us really deserve. 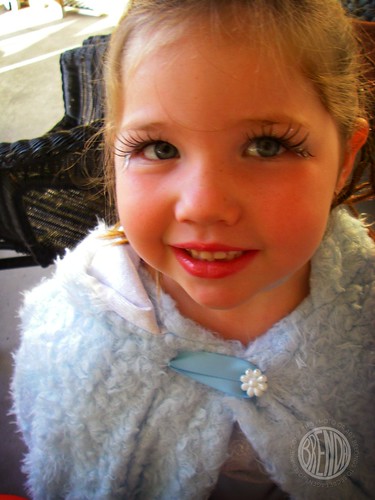 I didn’t get very many pictures of us trick or treating because I was way too busy being a mom. Also, I hate taking night photos. I’ve never mastered the flash (has anyone, really?) and the new mini-van camera hangs up so long for each shot, all the kids were three blocks away by the time the shutter actually clicked. 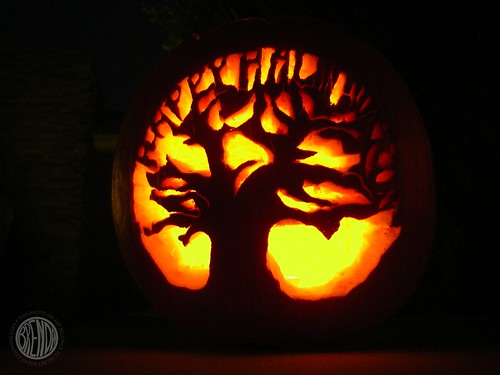 I think that’s my only night shot. Oh well. It was fun fun fun.

Baby Bug made me so proud. She marched up to each door with her cousins and shouted “twick or tweet” as loud as her little girl voice could go. There was absolutely no way anybody was going to ignore her cuteness. When they let her choose, her usual persnicketiness kicked in and she hovered there for several seconds looking for the green candy bar, I’m sure. Of course there were never any green candy bars but we did end up with quite a few peanut m and m’s. I’m pretty sure she chose them because there is a picture of a green m and m on the package. Too bad she can’t eat peanuts until she turns three. Oh well. More for me. 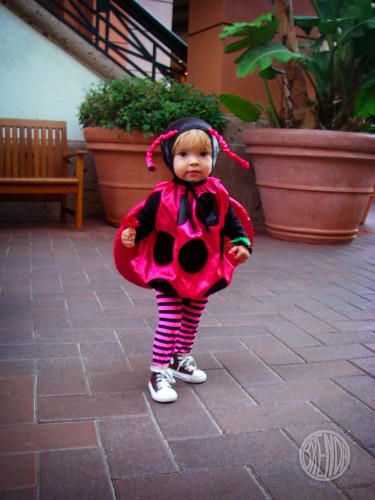 If that wasn’t enough to make my proud-mom heart puff up bigger than my head, Baby Bug even said thank you all by herself with hardly any prompting from me. Well, probably every fourth house I had to jab her with my elbow but usually she heard Grandma and Auntie yelling at her cousins and got it out pretty quick.

What really killed me was when one woman, who was kneeling down to to Baby Bug’s height, said bye to her. After blinking a couple times, Baby Bug yelled “BYEEEEEE!” really loud right back at the woman’s face. I think it surprised everyone. She is not shy, my Bug. Not shy at all. 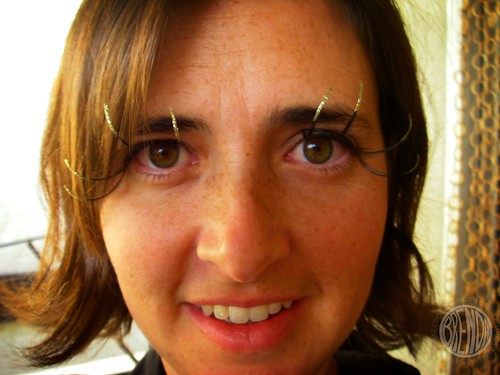 My mom says I was like that too when I was little. It’s hard to believe since I was known as “the girl who never talks” from second grade until college. I don’t know what happened to make me so shy. I’m certainly not shy now. I wonder if Baby Bug will be like me and lose this outgoing personality she has now. I kind of hope not. She really is a kick in the pants 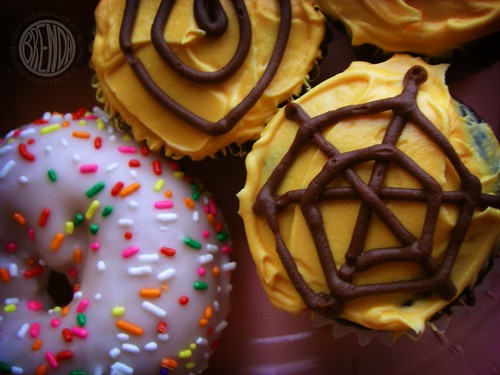 We ended the night with some homemade chili and some box-mix cupcakes. I really wanted to make these but I’m too much of a wus to try baking from scratch. I know, I know. I’ve heard it a thousand times from Jenn that box mixes suck but I’m a mom in a hamster wheel, remember? I can’t think that far in advance. One of these days I’ll try it. If only to make “hemajang mouths”.

My family decided to spend the night instead of driving an hour an a half to their own homes. Everybody was pretty tired. This is all fine and good but I don’t have any extra beds in my house. So that meant Gramma got the couch and everybody else got the floor.

My house was wall to wall blankets and bodies last night. It was like a big slumber party. Slumber parties on Halloween night are really really fun until five the next morning when the cat wakes Baby Bug up and then we have to spend the next three hours trying to be quiet without the aid of Sesame Street. 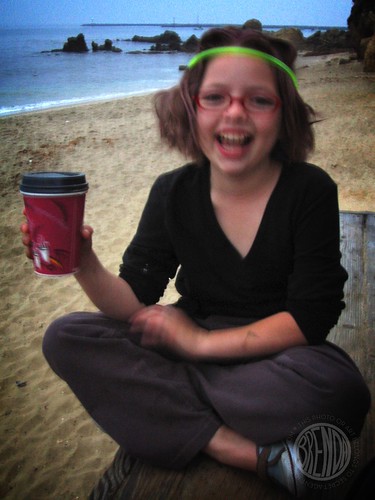 Thankfully, my niece Rapunzel woke up too. So it wasn’t just me and Bug killing time until the other’s work up. We decided trying to be quiet was a drag so we took a moonlight morning walk the doughnut store and watched the sunrise on the beach. That’s really something everyone should do. Doughnuts are good for the soul (and thighs).

I really cherish these times with my oldest niece. She’s growing up so fast. This morning with her left over purple hair and make-up she really seemed like a window into the future. 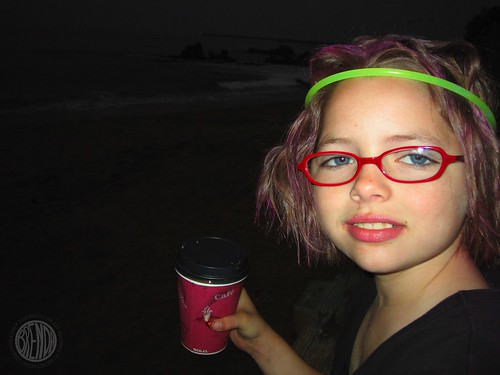 She’s only nine but in this picture she looks like she’s seventeen, working at Virgin Records with five tatoos and she doesn’t talk to me anymore. I don’t want that to ever happen. I think I would die inside if she stopped talking to me. 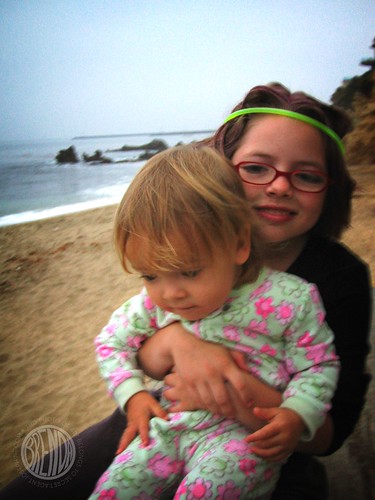 I don’t want my little girls to ever grow up. (Super Chic too but she was sleeping)