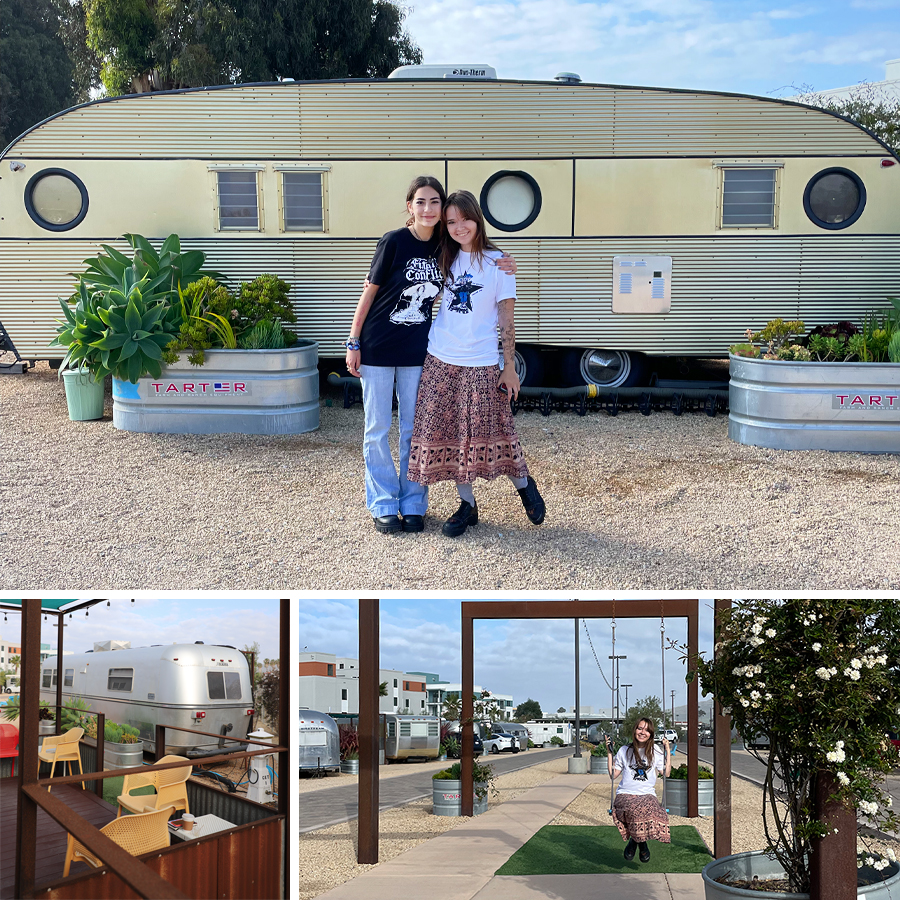 Bug had tickets to a concert in Ventura this last Friday. We bought the tickets way back in March and had really no idea where the band was even playing. That’s how I roll. Always living on the edge. For some reason in my mind I thought it would be close by because the band is a local band. Nope. They were playing a venue two-to-three hours away depending on traffic. Whoops!

When I realized I’d be driving Bug and her friend to the concert and then hanging out for four hours in a town I didn’t know and then driving home at midnight I decided I’d look around for a cheap hotel.

Guess what I stumbled across? The cutest vintage trailer park EVER!!!!  It was three minutes from the concert venue and by the pictures, it seemed super cool and hip and exactly like the kind of place I’d like to hang out in. I mean, if I’m going to be stuck alone while my kid is at a concert I might as well be stuck in some place cool, right? That’s what I say. 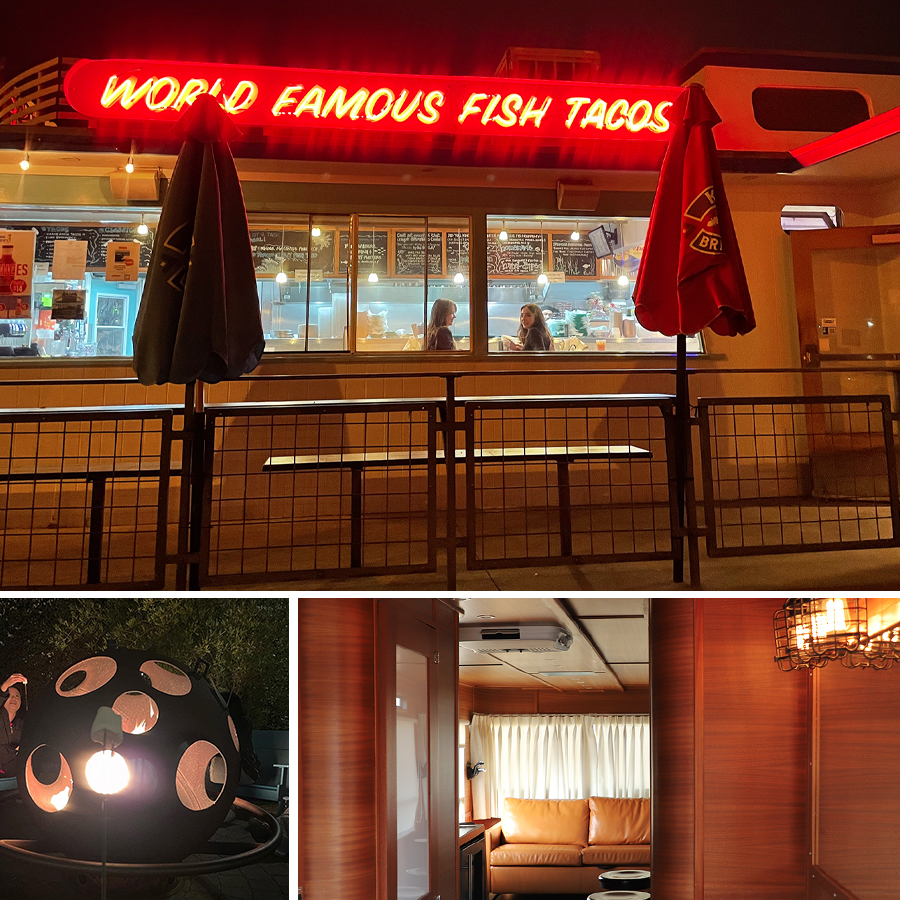 Friday night we drove straight there. Checked in briefly and then I dropped the kids off at their concert. 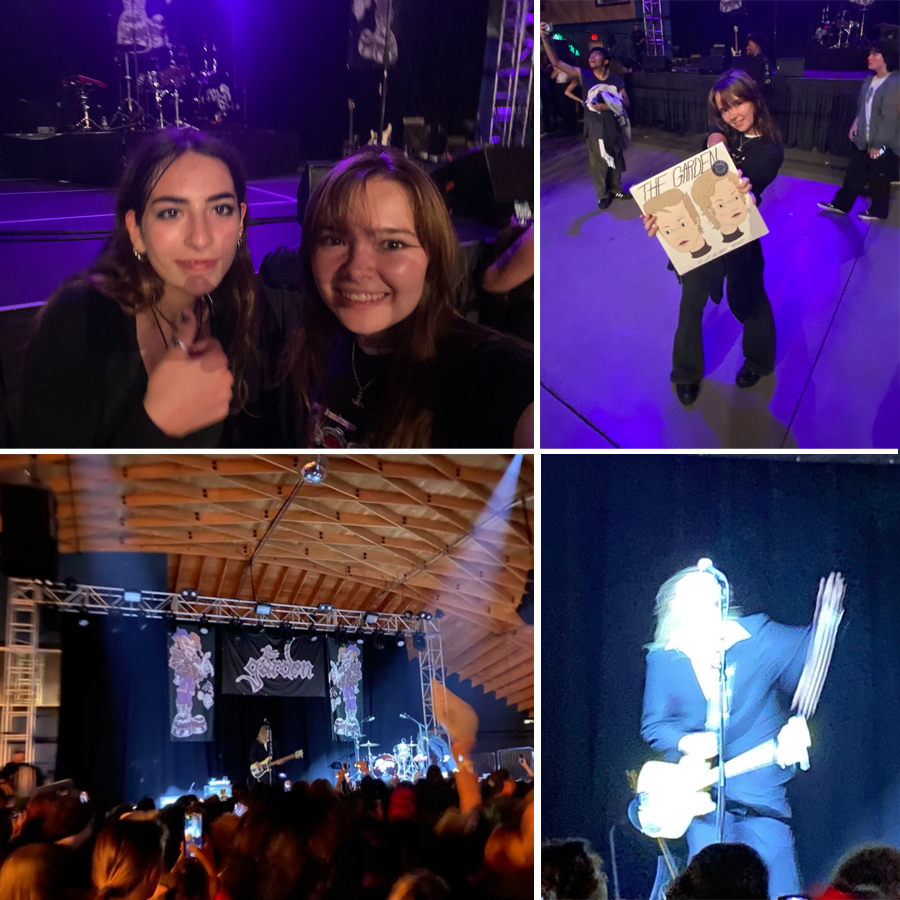 While they banged their heads around to punk music I settled into my vintage trailer. 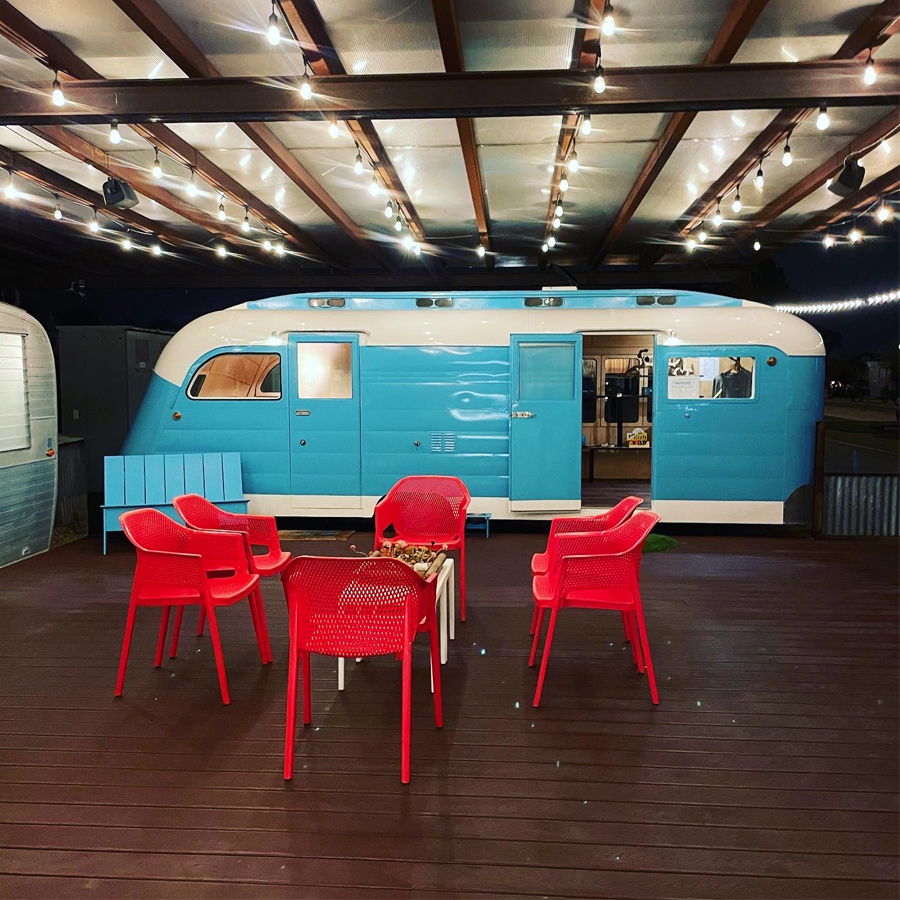 It was awesome. The trailer park manager gave me some hot chocolate and a cute little s’mores kit to take to the communal fire pit. I hung out with a group of mom’s on a getaway vacation and some old dude drinking whiskey. It was great. Three hours later I went back to the concert venue and picked up the girls. They were beat from all the mosh pit excitement so we settled into our trailer and went to sleep.

The trailer park is right next to the train tracks and I was worried that we’d be up all night listening to trains whaling (wailing?) on their horns but I didn’t hear even one. Either I was out cold or the trains that run that track only run in the daytime. I’ll have to investigate that. All in all it was a very cozy and quiet night. 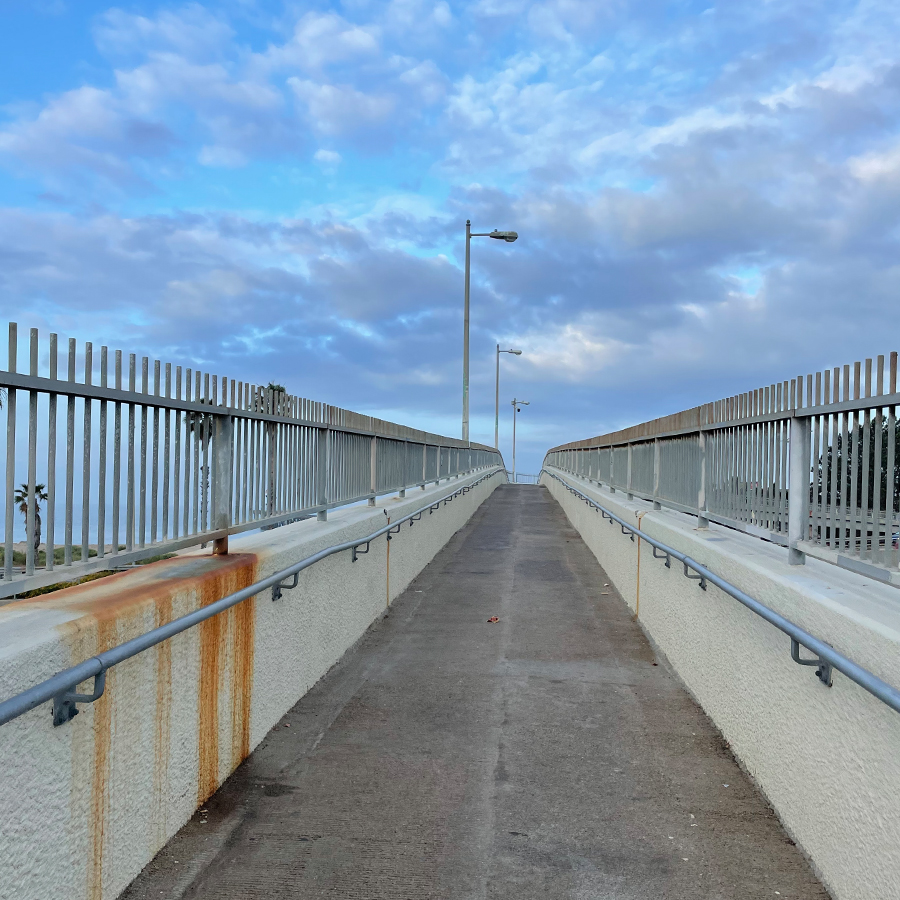 The next morning I woke up before the girls and took a short walk across the highway (via a bridge) and walked to the ocean. The trailer park is right across Pacific Coast Highway from the beach!!! Talk about great location! 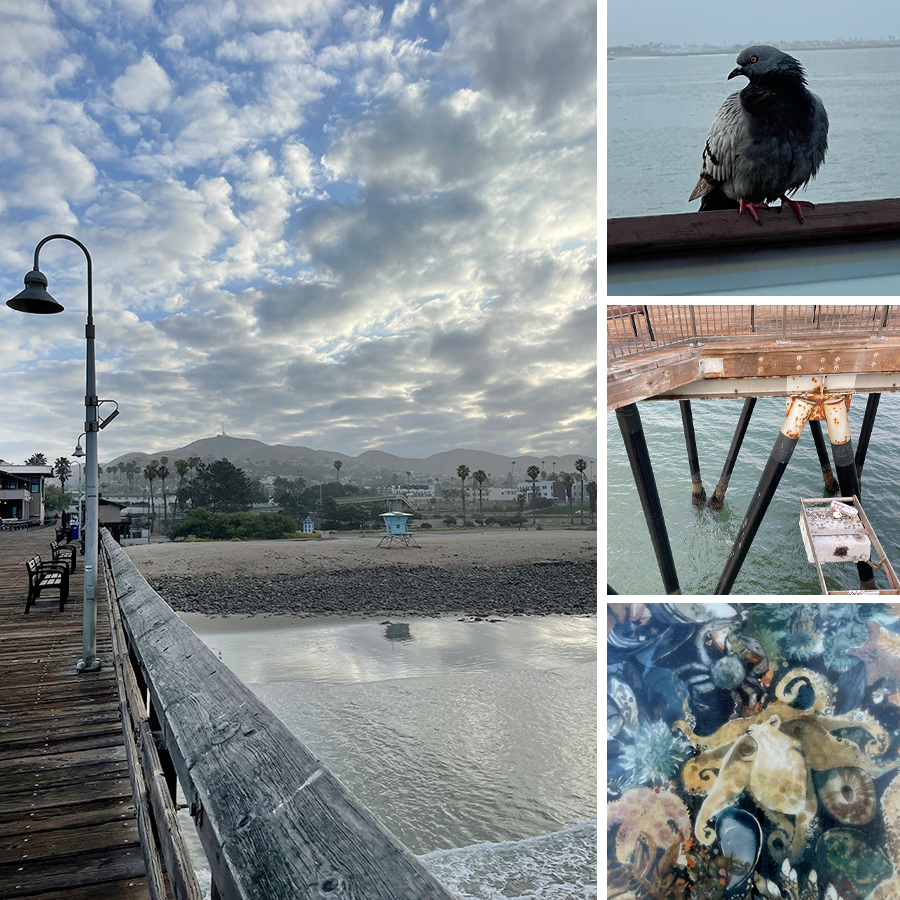 I meandered down the pier, watching the fisherman, the surfers and the various birds hanging around. It was a nice morning walk. There were a few beach bums but they totally had a kick back vibe that felt welcoming instead of scary. 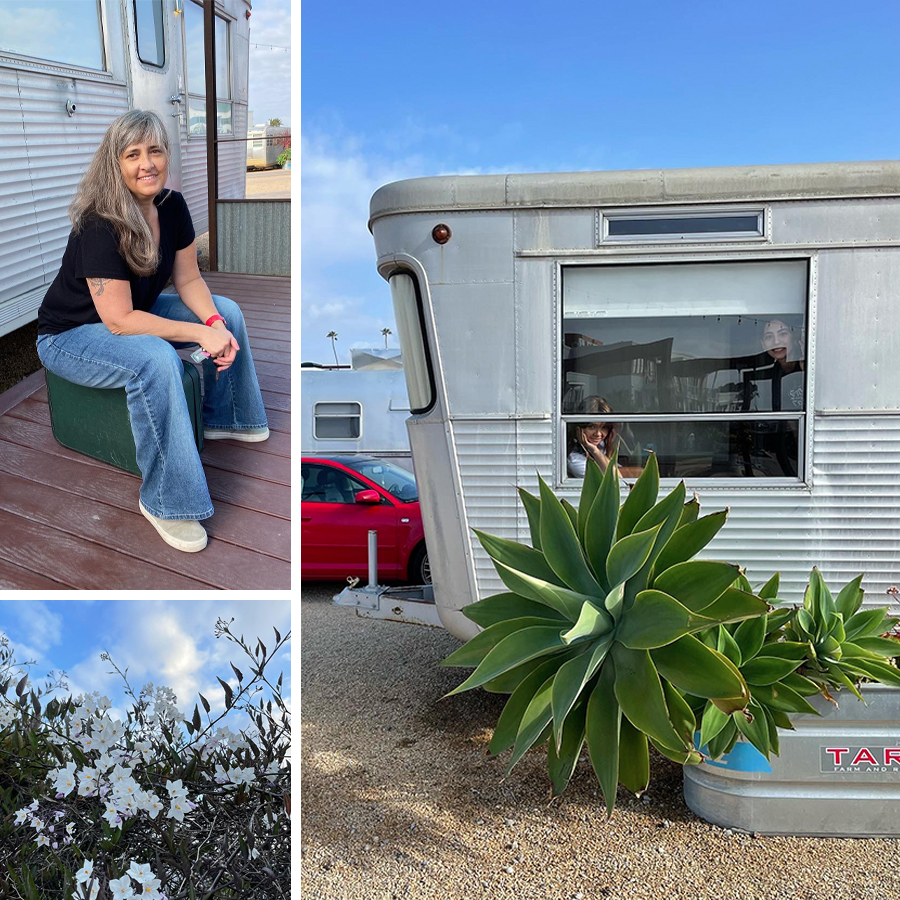 Then I headed back to the trailer park for my complimentary coffee and orange juice. 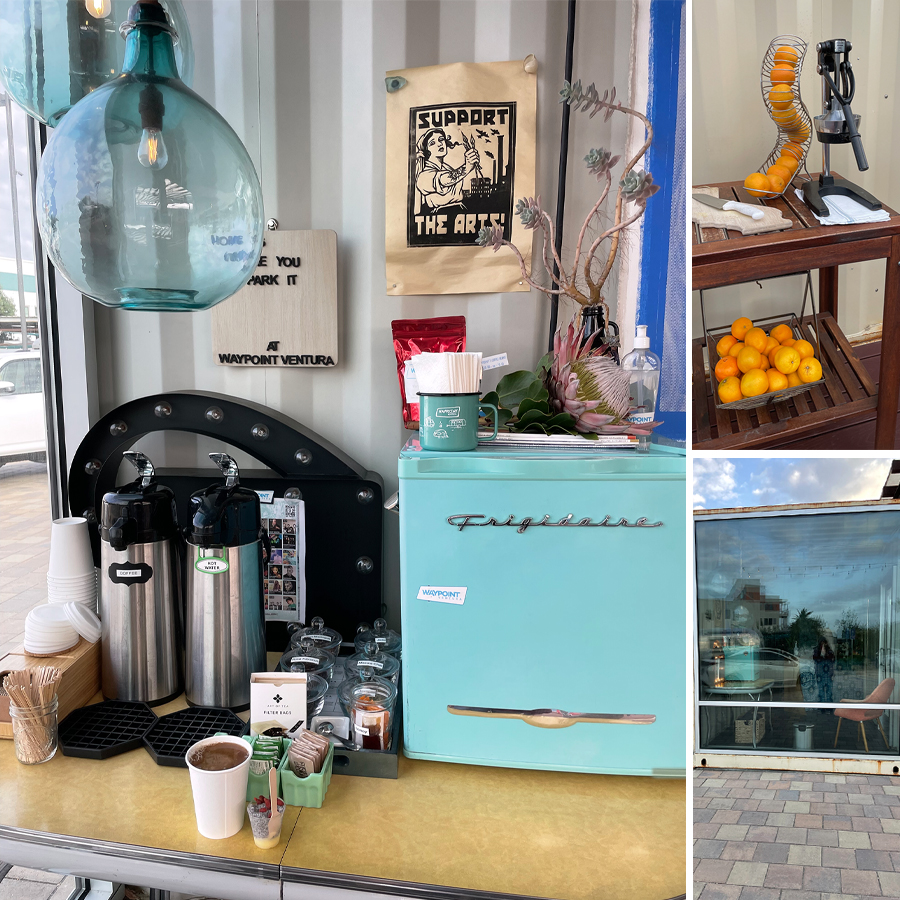 How nice is that? And it was good coffee too with real cream. No watery weak stuff with powdered creamer, no way. I really enjoyed this place and will probably come back. I wish I could have stayed longer but Bug had plans to go to Disneyland for Joon’s birthday. Tough life! Concerts and Disneyland and vintage trailers.. oh my! She’s definitely going to be spoiled once summer vacation gets here and I have absolutely no plans. 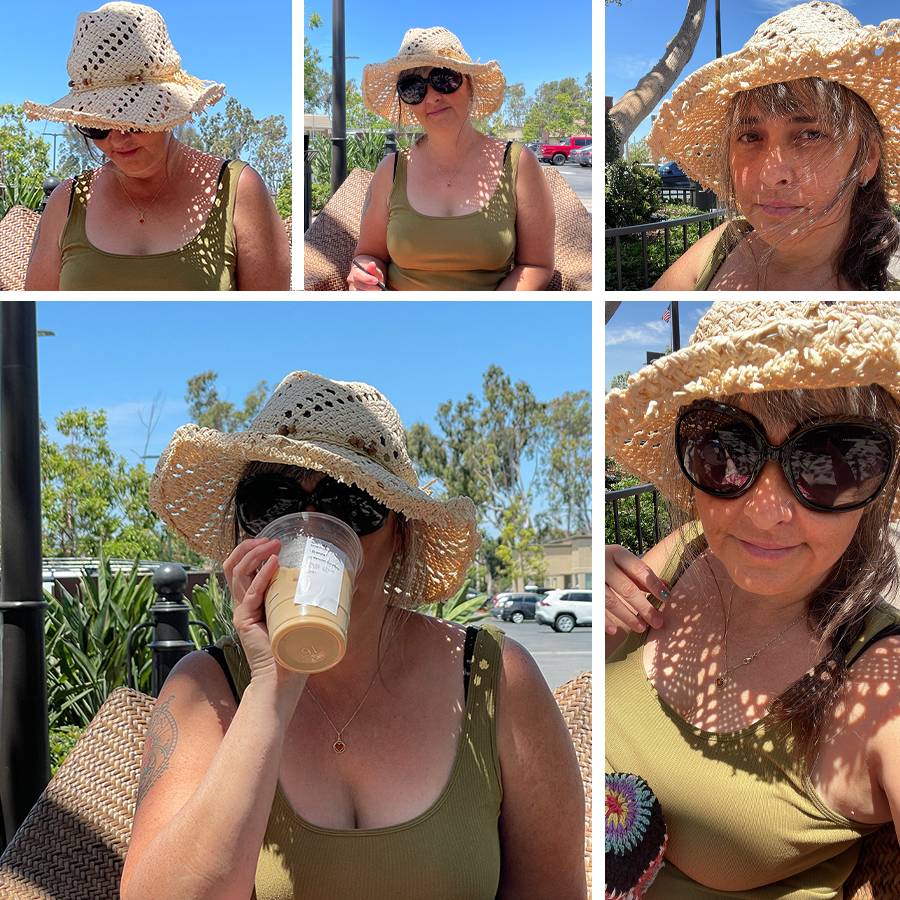 I actually woke up excited to blog today. That is huge! It’s been probably fifteen years since I looked forward to blogging. It was such a job there for a while, you know? It was fun when I was famous but then blogs fell out of fashion and mommy blogging was so overdone…I was kinda ashamed to be part of all that but I think in spite of myself and all the flubs I’ve committed over the years, I finally have a great corner of the internet all to myself. I really look forward to the comments here and I feel like you are my real friends. I love updating you. I love the inside jokes we have. So here I am, back!

I’ve felt slightly better over the last few days. Payam and I are friends and today I walked the dogs which was a HUGE serotonin hit. I follow a bunch of golden retriever accounts on Instagram (to combat depression obviously) and they make me miss Cody so much! Of course, I miss Whiskey too but there aren’t as many cute wheatens on the internet as there are golden retrievers. I’m a sucker for a good puppy video. They get me every time.  It was really fun to walk them. I walked them all the way to Starbucks and got them big glasses of water and puppuccinos. They were so happy. I might make it a regular thing. 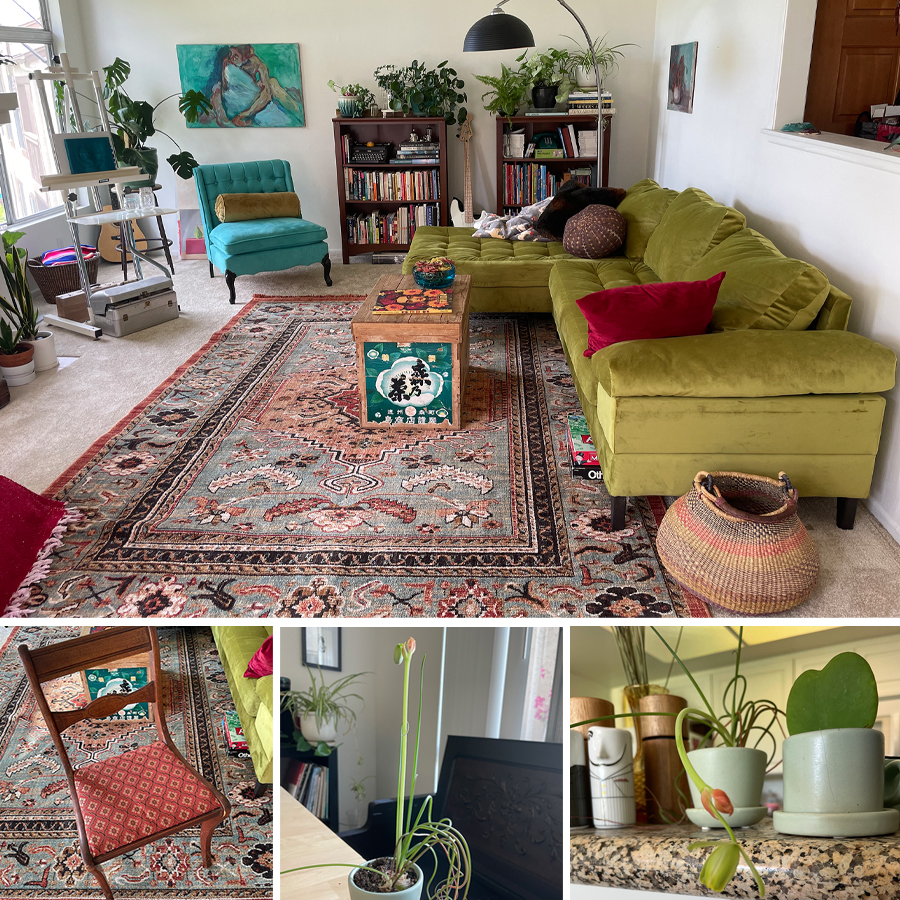 Yesterday I got a bee up my butt and I rearranged the living room furniture. That’s definitely a sign that I’m feeling better. I also re-covered that chair you see on the left. I bought it at an estate sale for ten bucks. It was soooooo dusty. I think the original owner must have been in dead or in a home for years before they opened up the house and decided to sell all the stuff. There were so many amazing antiques. I bought a pot and a can opener and a chair! I love a good estate sale. It’s been nice to have a new place to furnish. I wish I was a professional estate sale shopper. If anyone needs unique furnishings, email me. I’m great at finding unique things! 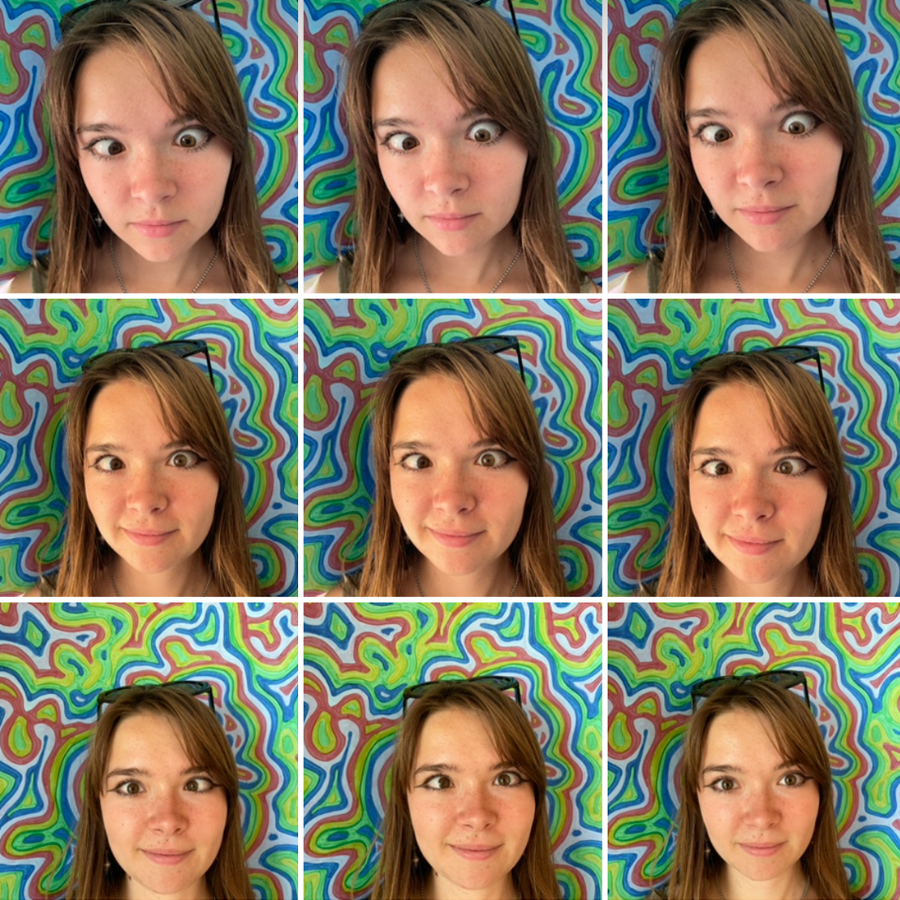 Oh yes, remember this goober? She still steals my phone and takes hundreds of silly selfies. I love it. 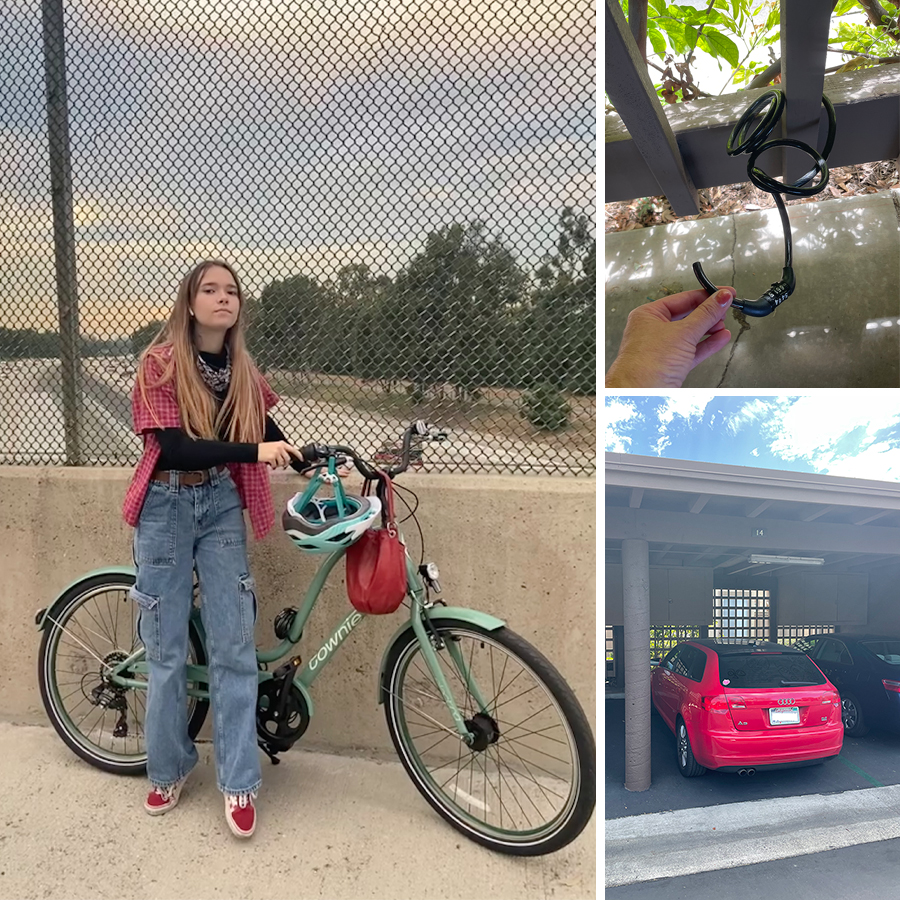 In other news: Bug’s bike got stolen right out of our carport. It was locked to the trellis wall with my bike (Suzette the bicyclette) and the thieves just cut the lock and took it. We are so bummed. They didn’t take Suzette though so I whipped her upstairs and have her stashed half in my closet and the other half sticking out. It’s not the most aesthetically pleasing arrangement but nobody’s going to steal my bike if I can help it. We filed a police report and an officer actually came out to talk with us. He said there isn’t much we can do but they took all of our information and they were really nice about it. I’m so glad Toby still had the serial number so if they do find it they can return it to us. Sigh… thems the breaks of apartment living. 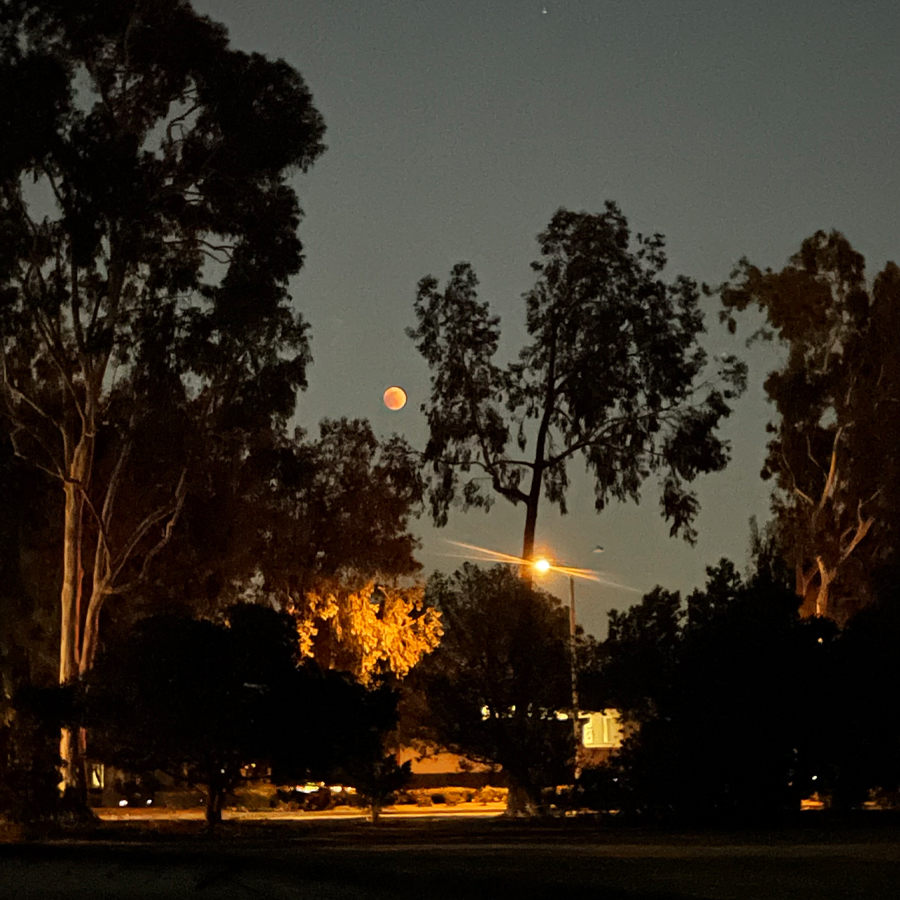 Last night Bug and I crept onto the golf course to take a photo of the super moon. It was so fun to sneak around in the dark where we normally are not allowed. I didn’t even care that I was wearing my pajamas. 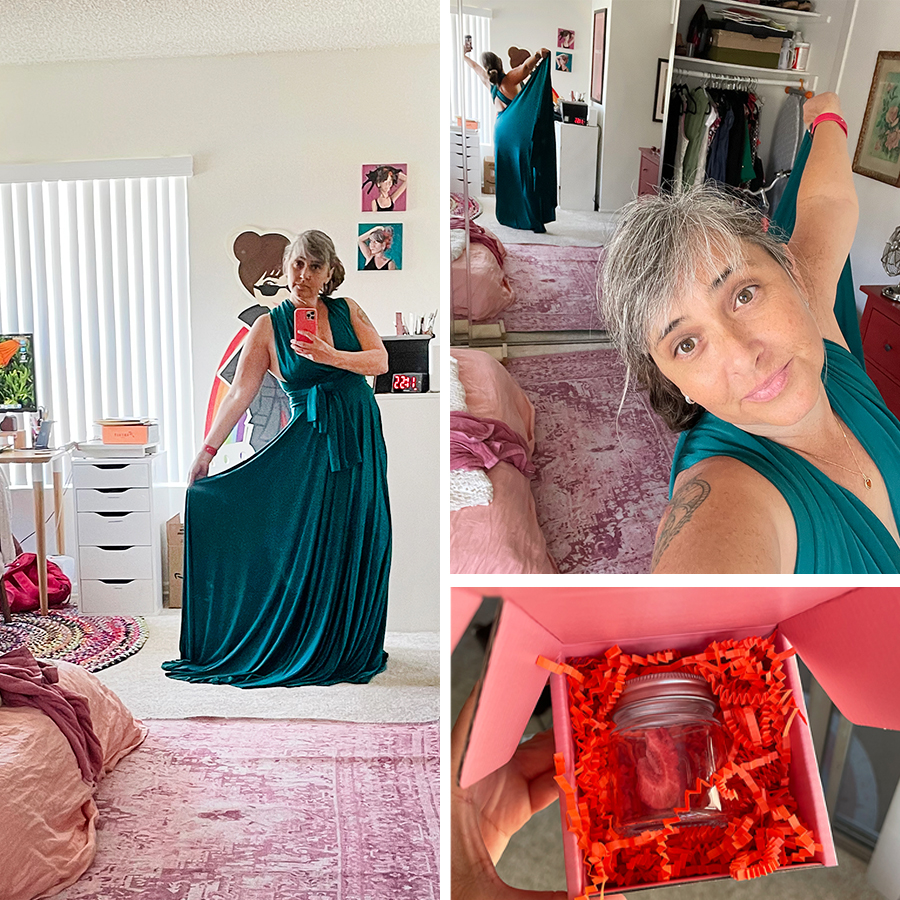 This is definitely proof that I’m getting my mojo back. I think I want to throw a “fabulous fifty” birthday party and ask all my friends to dress up for a pool party at the clubhouse in our complex. I’m planning the ultimate photoshoot and everybody must dress up. The more fabulous the better. I was thinking crazy flowered pants and Elton John style glasses but when I went to a thrift store to find some “70’s glam costumery” all I found was this amazing peacock green gown instead. It is truly AMAZING. There is so much fabric and it’s super heavy and stretchy like a swimsuit. You can tie it a million different ways and every way is flattering. I’m also working on a Brendarita invitation with real margarita powder and freeze-dried strawberries (just add tequila)! If you want to be on my exclusive mailing list email me. Because if you are still reading here on this corner of the internet you deserve to be at this party!