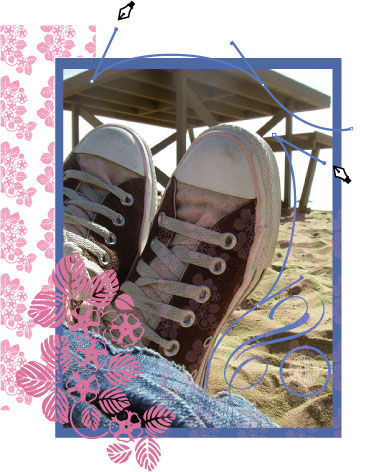 When I think about it, I think the reason I love Adobe Illustrator so much is because I hated it for so long. It really is true that you learn to love what you suffer for. And believe me, I suffered for Illustrator.

My first introduction to Illustrator was at my entry level job as a graphic designer for a direct mail company. Direct mail is a fancy way of saying “junk mail” but it was really nice junk mail and I learned a lot making it so even though I love to make fun of the “Junk Mail Factory” I worked for, I don’t really want to knock it as an industry. It’s pretty effective, if done right.

As an entry level designer, I had to make a lot of maps. A lot, a lot. Thousands a day, in fact. These were little maps that were lazered onto letters that were mailed to potential customers who might want to shop at the store that was pictured on the map with a five pointed star. The maps were simple. Just a major cross street, a highway, a N symbol for north and maybe a few squiggly lines for roads or rivers or whatever.

Making the lines was what was tricky. We didn’t use photoshop to do this. We didn’t use google. We used the pen tool in Illustrator and manually drew them with the mouse. We didn’t hand draw them and then scan them in or trace over google maps. No, we just clicked with the mouse and forced the line to curve or go straight using the pulleys and levers that Illustrator is so famous for. I know people who aren’t familiar with photoshop or illustrator will be completely bored by this but you can probably google a slideshow somewhere. Maybe I’ll find one later and link it in.

Here’s a pretty good one by someone who is way way way better at Illustrator than I am.

My point of all this discussion is that I HATED the pen tool. It was so awkward. It never did what I wanted it to do. In the beginning, I had no idea how to drag and click the little levers and I made every curve with a thousand jaggy points. It was horrible. Trial by fire.

Then one day, I decided to take a class in Illustrator at the local university extension program. This class sucked. It was right at dinner time and I was always starving and tired from working all day and then going to school at night. It was in an underground lab with cement floors and they always kept the air conditioning going full blast. They said it was because the computers needed cool air but I think that’s a bunch of baloney because I’ve sat at my desk with a space heater blowing right on my feet and my cpu for years and never had any “over heating” problems. I think lab people just like to be frozen, if you ask me. Bunch of cadavers…

I struggled with the class but learned a lot. One by one the mysterious little symbols in the tools palette started to make sense. With time I was even able to freehand a silly cartoon of myself. I never imagined I would learn to illustrate with this program. I was a graphic designer, not an illustrator. I just wanted to learn it so I could make maps more easily and maybe learn to manipulate text and create logos.

And yes, over the years I have made lots of logos. Logos logos logos. That’s what I did for a very long time. None of them are famous but still… I’ve made a ton of them. Logos are fun. They are like little illustrations but they need to be simple. But the reason using Illustrator to make logos is so important is because Illustrator creates VECTOR art.

I think I’ve explained the difference between vector and raster art so many times, people start to glaze over when they read those words. I’ll just give you the cliff notes version.

Vector art is created using points and pulleys. It’s the click and drag between point A and point B. Basically, it’s a mathematical equation that the computer saves for you and that’s about all that matters to me because you know how much I hate math.

What is beautiful about vector art is that size is irrelevant. You can make an illustration the size of your thumb or as big as a bus and it doesn’t effect the size of the file or the quality of the line. Vector art lives on in smooth clarity forever. Much different than it’s evil brother the raster file.

Raster art is created using pixels. Photoshop uses pixels. Photographs use pixels. Pixels are beautiful little squares of color. The only problem with pixels is that if you blow them up to the size of a bus, they become gigantic building blocks and your smooth line becomes a stair case you could climb on. This jaggedy edge is called “pixelization” and looks like crap.

I’m sure you all have done it. Taken a file from the internet and tried to print it on your home ink jet printer and wondered why it came out looking like some kind of dot matrix texas instrument invaders game from 1980 about an inch big on your giant letter size piece of paper. That’s an issue of resolution but that’s beside the point. The jaggedness is what I’m talking about.

This is particularly troublesome for people who try to create logos in photoshop or paint shop pro. Your logo will look great on the screen or even great printed super small but if one day you decide you want to make signs as big as your head then your beautiful logo suddenly looks like crapola.

And that is why I love Adobe Illustrator. You don’t have to recreate your logo in every different size. The eps file can print any size you want and the line will be crisp as a cucumber until the end of time.

I know I’m boring you with this and I’m sorry. But there are probably a few graphic designers out there reading this, who are shaking their head and laughing at me trying to stumble through explaining this stuff. I’m sure there is probably even a better blog who has covered it in a much more succinct manner. But this is my post and you asked me why I love it so I’m telling you in my rambling awkward style.

I haven’t even gotten to how fun it is to draw in illustrator. I know it’s really really hard at first. I hated it too. My first illustrations were pencil drawings that I scanned into photoshop and then did some kind of trace outline filter and then exported into Illustrator.

Those were the days. My computer would crash almost every time I tried to do this. But I knew there had to be a way. Eventually I got tired of all the sketching and scanning and exporting and decided to freehand it with the mouse.

Over the years, using the mouse as a pencil became very natural to me. It’s sort of like learning how to write with a really fat round pencil… it’s hard at first but you get used to it. Just like you got used to those big fat pencils in kindergarden. Remember how hard that was at first?

To make a long story short. Illustrator is an incredibly powerful and useful program. It requires a lot of patience to learn it but it will pay you back fifty-fold. If you have any questions about Illustrator, I would love to hear them. I might not be able to answer them but I’ll do my best.