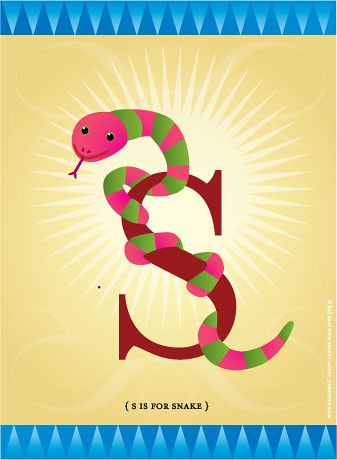 S is for Snake, of course! Baby Bug and I like snakes. We like to draw them. That’s one thing that she can draw already. She can draw “nakes” and “bubbles” and “grass”. Not bad for 21 months.

I don’t love snakes personally but I’m not squeamish or anything. I’ll hold them if you insist. I don’t think they feel gross on my skin. They are actually really smooth and warm. My only concern is that I don’t want them to poop on me.

My roommate and best friend in college (who I’ll call Biff, affectionately) always had snakes. I’m pretty sure she still does. She was allergic to cats so snakes were the next best thing. She loved her snakes. She’d take them for walks through the grass in the court yard of our apartment building. She’d clean their spotless cages every day. She’d force me to drive her to the pet shop so she could buy them fresh crickets. Her snakes were the most spoiled snakes ever. Just thinking about it makes me happy. I love happy pets.

Don’t ask me what kind of snake Biff had. That information has left my brain. In fact, I’m a bit concerned that she is going to read this (or any other snake lover for that matter) and have a conniption that I colored this snake incorrectly. There are no pink snakes probably. If this bothers enough people, I’ll change this snake to a more politically correct snake color. Just let me know.

I have a snake story! It seems to be the theme here lately after that endless underwear post I wrote yesterday. Yay stories! I hope I haven’t told this one before.

Biff, the snake lover, was a regular prankster. She came by it naturally. Her dad was a prankster too. I remember once we were painting one of our friend’s vans (yes, I painted a van once) and Biff’s Dad lit off a stink bomb right underneath the van and smoked us out. I didn’t know her Dad very well back then and I just could not get it through my head that a Dad would do such a thing. But he did. All the time. I learned to love him for it.

Biff liked to pull all kinds of stunts on me when we lived together. Her favorite was hiding condoms on my side of our shared room (we were poor and had to split a room). This was TERRIBLE to me because I was a very good little Christian girl and I was “saving myself for my future husband”. Yes, I was a prude even at 23 but that is another blog post.

Finding a condom in my room was like finding a crack pipe. I died a thousand deaths every time I would reach under my pillow and pull out this disgusting candy wrapped rubber thing. What would my parents say if they found out I had condoms in my room?!!! The horror! I don’t know what I did to get her back but it may have involved turning the volume up on her alarm clock. Biff was not a morning person.

We also had another roommate. I’ll call her Mary, which is actually her real name. We loved Mary. She was completely opposite of us and great for playing jokes on. She was a science major and always had her head in a book. Except for the times when she would blast heavy metal music and jump on her bed to entertain us with air guitar solos. Oh, the memories. I could ramble on forever.

Anyway, Mary had a bit of an anxiety condition. I think it had something to do with her heart. Every once in a while she would freak out that she couldn’t breath. She also took caffeine pills so it could have been related to that. I’m not sure. Maybe she’ll read this and correct me. Whatever it was, it was pretty serious.

One day Biff decided to hang her snake’s old disgusting dead skins (because, as you know, snakes shed their skins) on Mary’s door. I think she even saved them up for the occasion because she had several of them. Biff taped the crusty long white scaly skins to the top of the door frame while Mary slept.

You guessed it. The next morning Mary had a heart attack. She had to get up at five a.m. because she worked in a top secret government lab (I’m not making that up either) so she discovered the snake skins in the dark and pretty much fell over dead from surprise. I guess feeling rough scaley things on your face when you are not expecting it, is pretty frightening.

Mary didn’t really die, of course, but it sure was scary. She couldn’t breath. She had to lay down. She had to breath into a paper bag. It was a pretty big deal. Poor Mary. 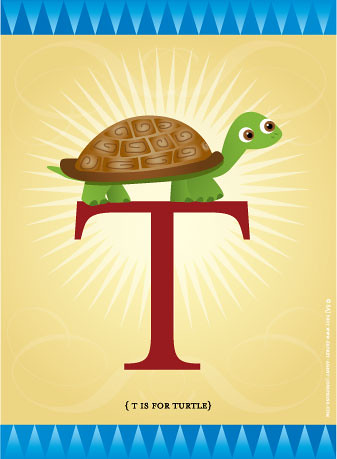 I don’t have any turtle stories. Turtles cute and they live to be 102 or something. That is kinda neat.

Get your letters here!

In other news: I have been picked to be the first interviewee for a new website about inspiration boards. My dribble about myself is pretty lame but the idea of the website is cool. I think she is going to interview artists weekly and ask them how they stay inspired. Click over, it might just inspire you!