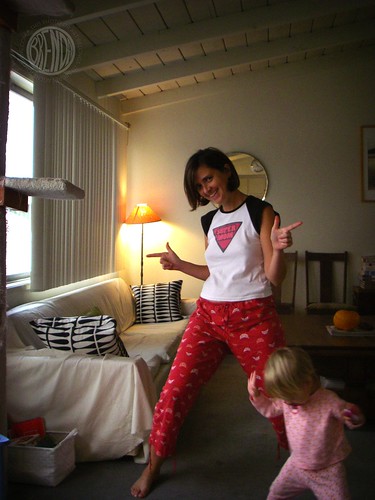 I don’t want to bore you to death with a bunch of funny Bug stories but I have just a couple that I can’t resist sharing. I’ll try to be brief and not go on and on.

So, Toby and I are trying to get pregnant (yeah, whatever) and I use this silly ovulater kit. I had a few pee sticks on the counter for some high tech science experiment I was doing and one day I sat Baby Bug on the counter while I was doing something else. (Okay I was peeing but that is beside the point!) Next thing I know, Baby Bug had one of the pee sticks (that was used but covered, so no germs) in her hand and and she holds it to my face and says,

“Open Mommy! Aaaaah. Open!” like it was a tongue depressor.

Ha hahahahahah! Okay, maybe that’s only funny to me.

How about this one: We’re in the grocery store and she’s screaming the alphabet. That’s funny right? I mean she’s so little, she looks like she’s six months old and she’s singing/yelling the alphabet (from “A” all the way to “Z”) so loud you can hear it thee aisles over. Maybe that’s only funny to me too because I think it is hilarious that I have the smartest kid ever.

Sorry. That was boring. I just thought it was time for a short post instead of a super long one. Blame it on the snoctopus that has taken over my head.