posted in gardening, the sticks on January 3, 2012 by SAJ 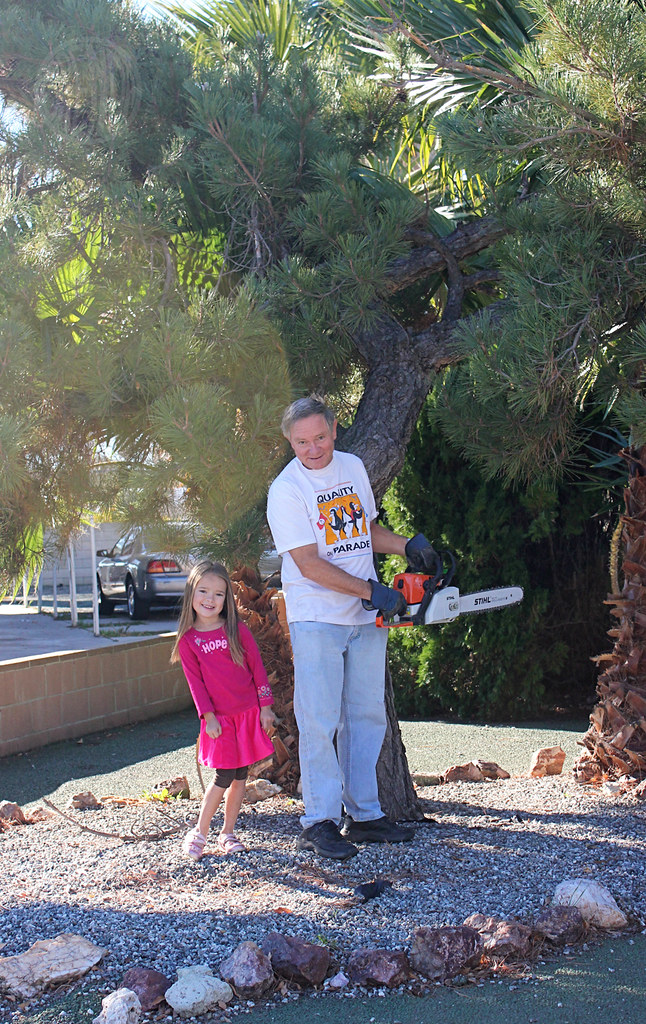 Yesterday was a very big day. My dad came over to chop down my front yard pine tree with his trusty chainsaw.

You could say we were excited about it. 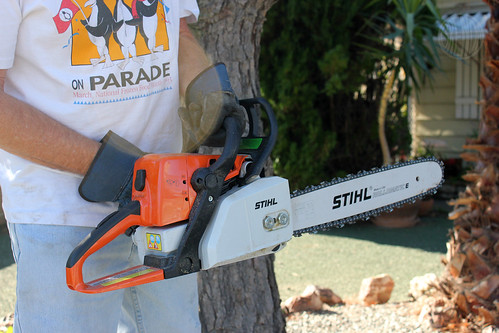 No, this is not a sponsored post for chainsaws. 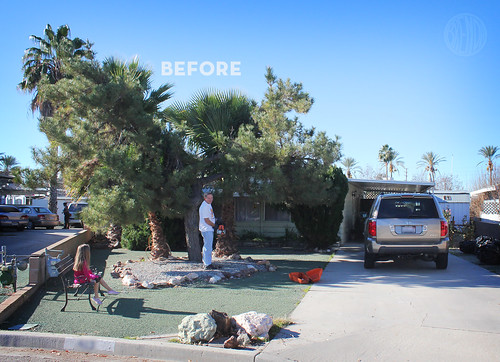 So here’s my front yard with my funny pine tree. It’s kind of hard to see because there are multitude of landscaping errors going on here that are distracting. But if you look close, you’ll see there are two palm trees growing beside the misshapen pine tree. They are volunteers. It happens around here. Palm tree seeds fall from the big palm trees and next thing you know you have a little sprout growing. The sprouts seem innocent at first but if you don’t pull them out right away then they grow into giant trees that have to be pulled out with a semi. I’m serious.

We did that with another palm tree in my side yard because it was uprooting a brick wall. It was a crazy job. My dad actually hooked chains to his 18-wheeler cab and hauled the thing out. It left a huge hole and then the fallen palm tree sat around in my side yard for six months because it was too heavy to carry away. I had to pay something like ten gardeners to chop it into smaller pieces and finally get rid of it for me. Those palm trees may look majestic and beautiful when they are tall but you better make sure the sprouts land where you want them to or they might just take out your house. I’m not kidding.

This is all backstory to my pine tree story. You see, when my Grandpa lived here he intended to take out the two small volunteer palm trees when they were sprouts but he never got around to it. They were growing out of the side of this lighter-colored gravel-diamond that mobile home parks call landscaping around here and they offended him greatly. My neighbors recall him mumbling about them but never actually taking them out. 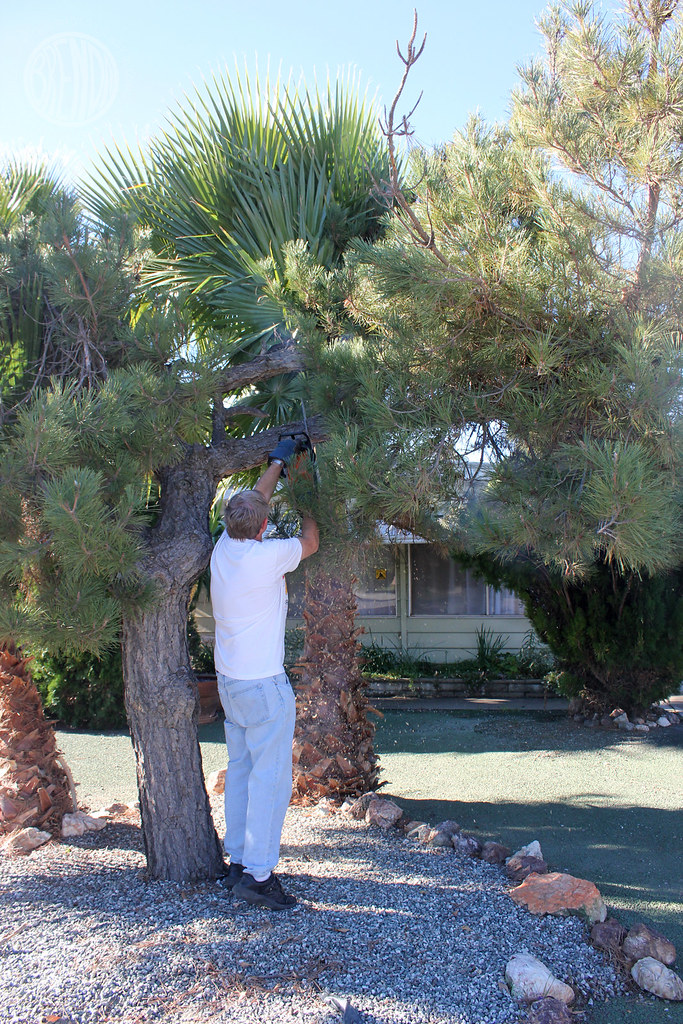 Fast-forward ten years and now I’m here. My immediate opinion was that the pine tree in the middle looked like a bonsai hack-job gone wrong. Somebody (probably my Grandpa who was known to be a little short-sighted when it came to gardening) trimmed it very badly over the years (or maybe the weather broke a central branch or something) and it looked like nothing you would see growing naturally in nature. It just looked bad.

I figured: take out the pine tree and leave the volunteer palm trees that would be murder to take out anyway. They might be a little off-center according to that lighter-colored gravel diamond but they didn’t offend me nearly as much as the Frankenstein pine tree with branches sticking out like broken arms. Not to mention the palm trees would make a huge mess when they were up-rooted from the green-cement fake grass.

I could write a whole post about that stuff. I don’t even know what it’s called. It’s some wonder-garden water-efficiencey landscaping idea left over from the 60’s. I hate it. I think it looks as much like grass as astro-turf but it’s low maintenance so I overlook it. It’s just part of life out here.

The trees were all growing so close together that the palm fronds were getting stuck up sideways along the pine tree branches. Are you following me still? Let’s just cut to the chase and say that it was a “cluster.” And that is why my dad was here to cut it down. Well, that and I wanted some stumps for the Fairy party. Yeah, I know. Ulterior motives. 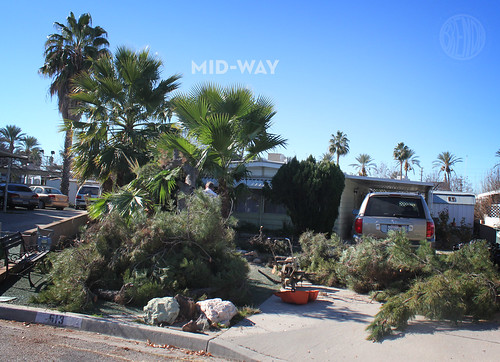 So cut cut he did! 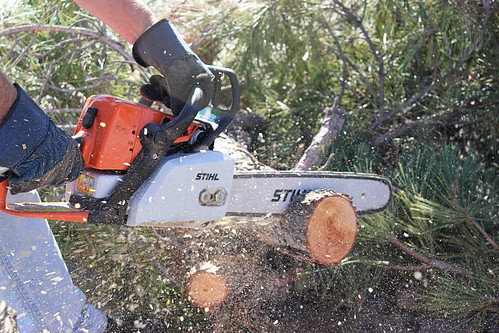 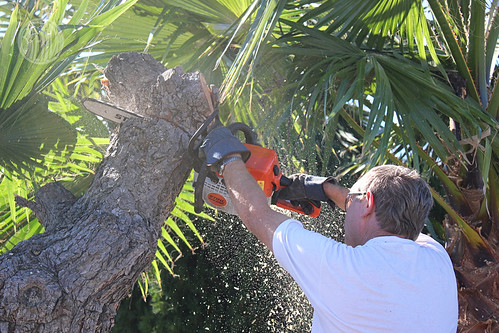 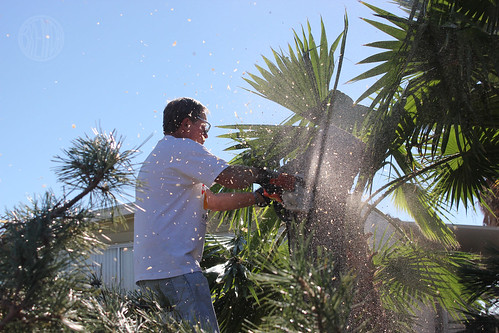 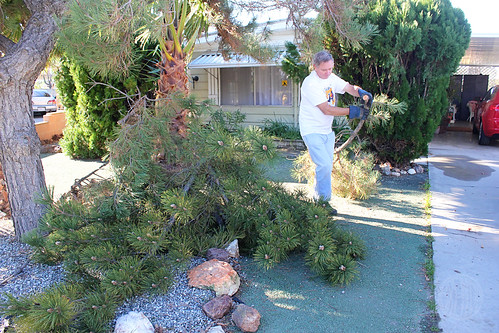 Yes, it was kind of sad to see that big tree topple. I hate cutting down living things. But I think it’s for the better. 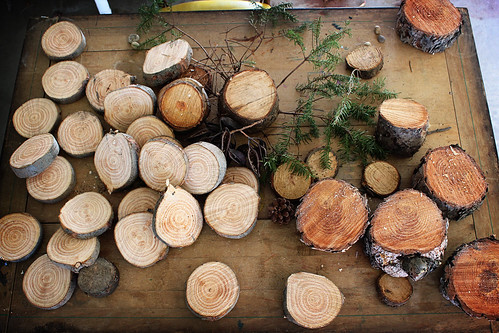 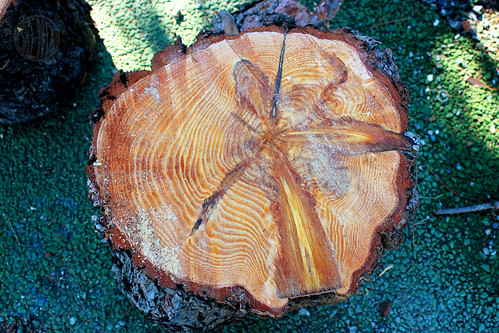 My dad is the best in that he humors my silly visions. He made me every size stump I could ever ask for. 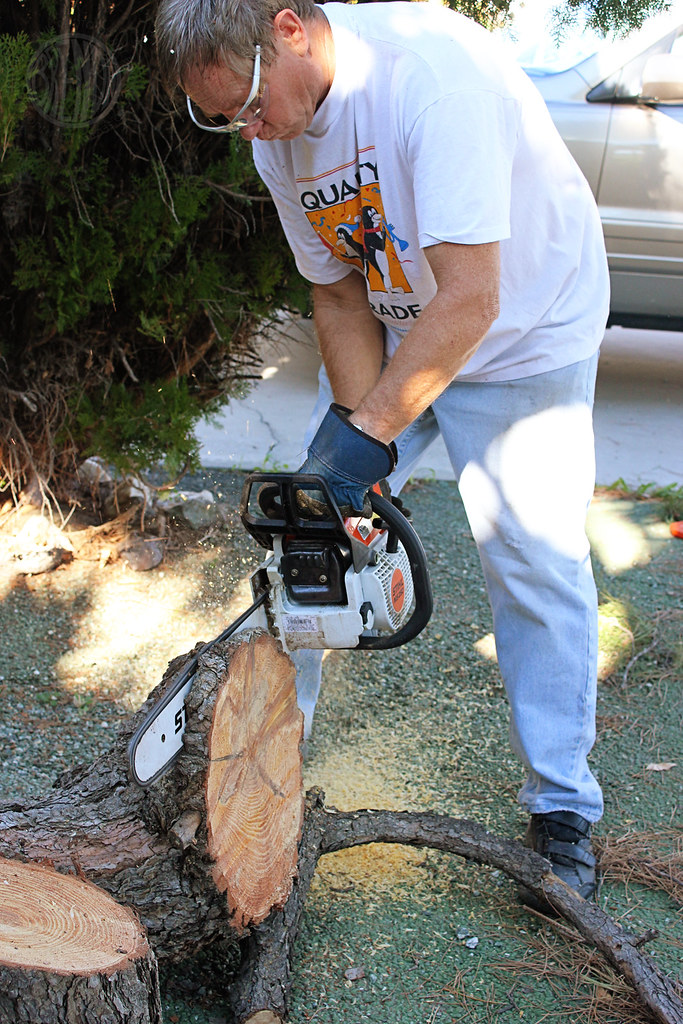 He even cut some thin disks that I can make into signs! Something like “Fairies This Way.” Can you see it? 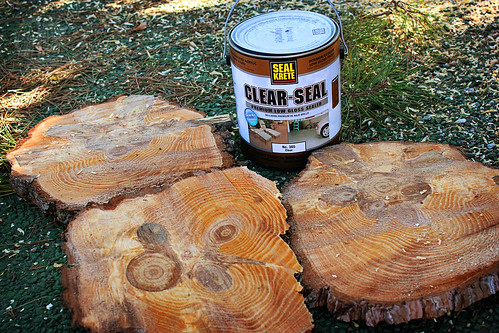 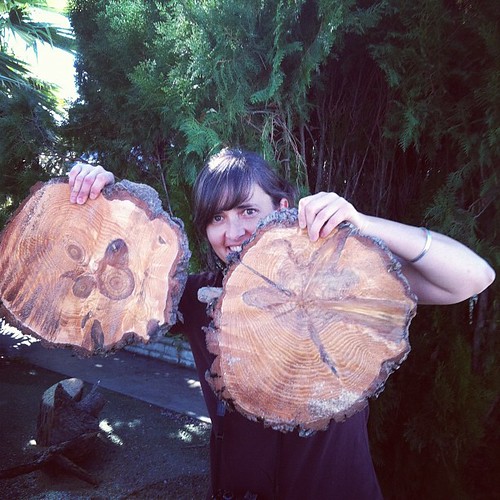 I’m so excited. I’m going to let them dry out for a day (they are very sappy right now) and then shellack them so they are pretty and shiny. Maybe I’ll paint a sign first or burn a message into them. I haven’t quite figured out that part. 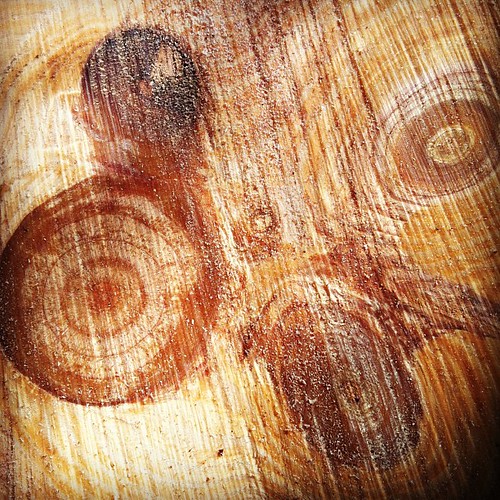 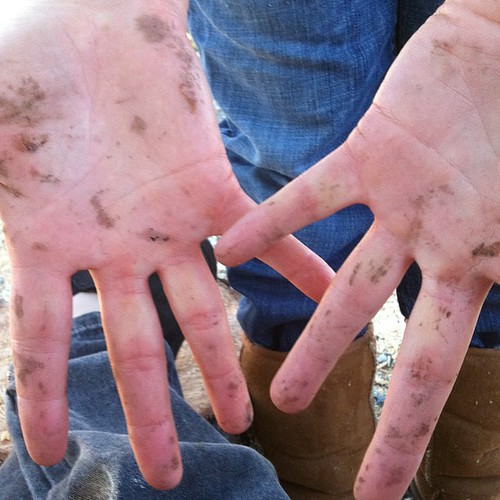 Except when it makes my hands like this. Though, I did figure out a magical way to remove tree-sap from your skin. I don’t know if this is common knowledge but when I was taking a shower and madly scrubbing at them, I tried a little droplet of bath oil and voilá! It came right off! Who knew?!! Not me. I tried the oil again with Bug and it worked for her too. So there you go: Have tree sap? Try bath oil. I recommend Neutragena because it smells lightly of sesame. 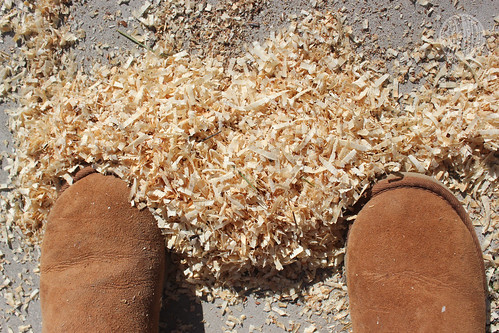 I’ve yet to figure out how to remove sap from my expensive sheepskin boots though. I was such an idiot to wear them. Ugh. Blarg. 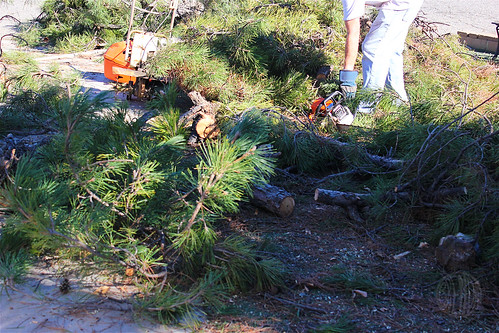 Anyway, it took the rest of the day to clean up the mess and now my yard looks like this: 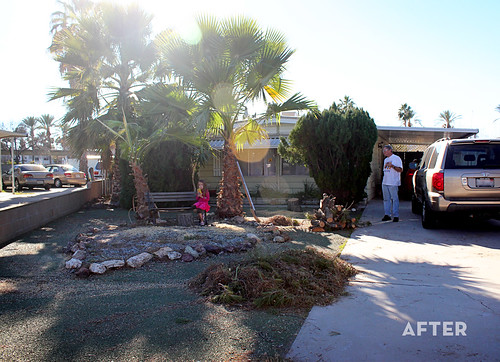 It’s going to take a few days for the palm trees to adjust to their new-found freedom and I need to hire someone to blow away all the sawdust bits but I think it looks better. 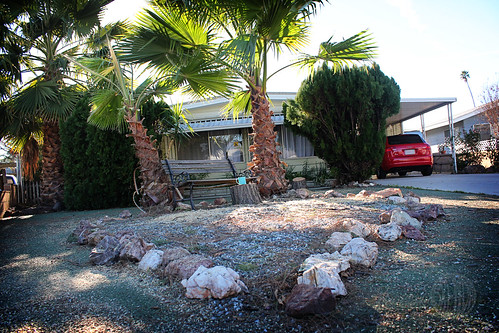 It is what it is. Don’t even get me started on those lumps we call Juniper bushes. I’m going to do something with them but I’m not going to carve them into squares like everyone wants me to. I just can’t do that. I want them to be more oval like trees if it’s possible but I’m still trying to find someone who will lend me their hedge trimmer. It’s a process…

A very, very long process that I probably will never get to see to completion. But in the meantime, the stump makes a mighty fine coffee table for me while I sit and contemplate the possibilities.