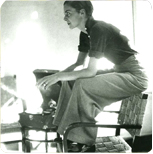 Skinny jeans can come and go and I couldn’t care less. I am, however, obsessed with these trousers. I think I need a time machine so I can go back to 1932 and get some. 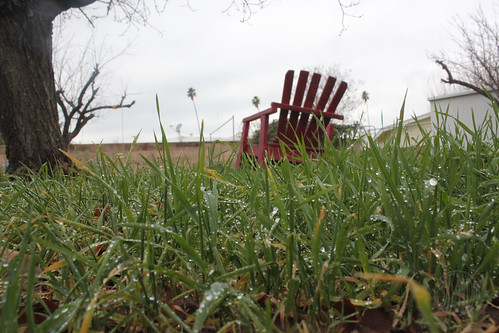 I have to admit I’m solar-powered. You always wondered why I’m full of enthusiasm and great ideas. Well, that’s my secret. It’s the sun. When the sun goes down so do I. So I get plenty of sleep which is awesome. I’m like Wall-E when I wake up. I have to situate my face so that the sun can fill up my battery reserves and then BVrrroooong! I make that sound a mac makes when it starts up and you forget to turn off the volume before shut down last time (Don’t you hate it when that happens at the library?).

This also goes for my moods. Sunny = Happy. Cloudy = Sad.

It’s great that I live in Southern California where it is sunny 90 percent of the time but when it’s cloudy I suddenly become like the rest of you sad people on anti-depressants and I don’t know what to do with all this gloom! It’s so murky and, and…awful!!! How do you cope?!! How do you get anything done? Ugh. I feel like I’m wearing cement shoes and my arms are stuck to the ground with strings of chewing gum. I just want to go crawl into a hole and die. 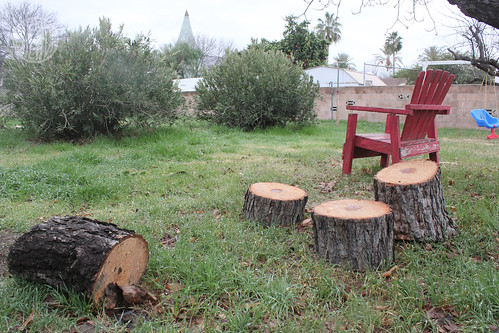 This is all not very fantastic when you’re planning a birthday party for a little girl who is turning six and birthday parties are what you are good at. There is no failing at birthday-party-planning in this house. No sadness allowed! We eat obstacles for lunch. Bring on the challenges!!! Fifty people in a small mobile home with muddy feet?! I can do it!!!! 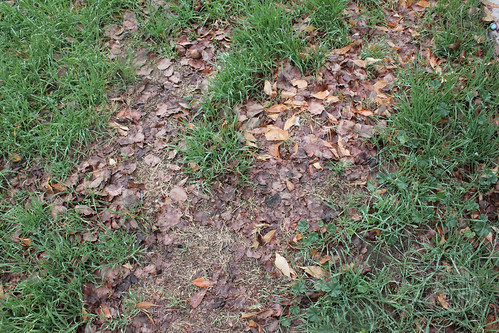 As you can see, my winter-wonderland of backyard fun with stumps for chairs and bedspreads for tents might not be happening. My visions of tulle strung from the trees and girls sipping lemonade is vanishing before my very eyes. All I can see are freezing cold fairies with muddy feet running in and out of my house and tracking mud all over my peach-colored carpet. Which I hate anyway so I guess it’s not that big of a deal but I’m still getting hives over it. Ugh! Mud! Kids! Hyperactivity! The bounce house people won’t deliver the bounce house if it’s going to rain!! What am I going to do?!!!! 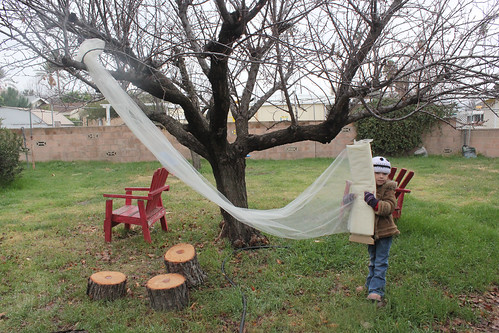 There is a thirty-percent chance of rain predicted for Saturday. I know in Portland that would be a perfect day for an outdoor party. You might even throw a pool party on a day like that and wear a bikini but here? We are weeenies! We are freezing our butts off!!! We are seriously shivering and moaning. It’s sad and pathetic and majorly cramping my party-planning style.

Well, until the sun comes out. When the sun shines I can think of all kinds of crazy ideas. I can do this. We can have an indoor party. I am excellent at crafts! But when the sun goes back behind a cloud again I shrivel up. The obstacles! It’s too hard! I just want to cancel the whole thing. 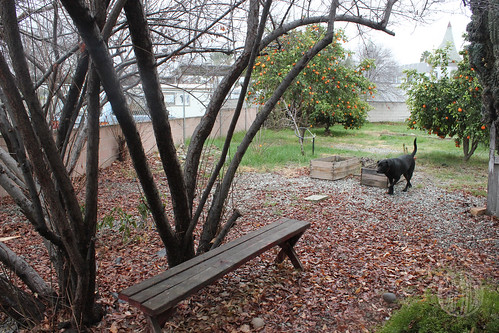 So here’s my plan: The bounce house people said I can decide on the day of the party whether or not to have a bounce house. If it’s raining we’ll just move on. If it’s not really raining we will move the bounce house to the front yard and put it on the driveway where there is no mud. I don’t know where people are going to park but that’s their problem.

Inside: I’m going to move all my furniture to the side and create a big open space in my living room/office. Maybe I’ll talk Toby into letting me borrow the giant heirloom Persian rug that he has rolled up in Bug’s room at his house that is not getting used. He won’t mind too terribly if it gets chocolate cake ground into it, right? Hmmm…that probably won’t fly.

Then I’ll use all that tulle that I was going to put in the trees outside, inside. It will be like prom night! I’ll just hang it from the ceiling from an old hula hoop or something. 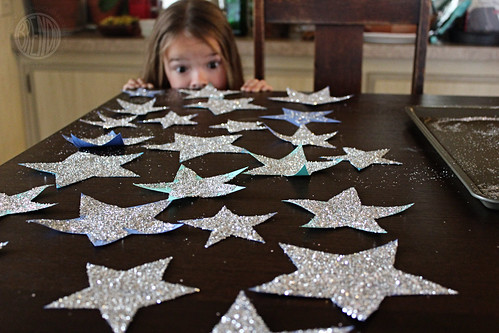 So with the tulle and these stars it could be magical, right? Bug and I made silver stars the other day with card stock and glitter. I was going to hang them from the trees outside with my fairy orbs but now I think I’ll just hang them inside. Maybe I’ll get crazy with some sheets and make fairy tents inside too. That will be super fun when the kids pull them down along with the sheetrock from my ceiling. Oh boy.

I wish I had a man around the house who liked to build things. That would be so awesome. I could probably install a giant branch in the middle of my living room and bolt it to the ceiling. The cats would go crazy. (Note to self: If ever dating again make sure to date someone handy.) But I have no man around the house and my dad is working until Saturday so I’ll probably have to scale back my visions. That’s okay. It’s gonna happen. We’ll make it work. It always does. 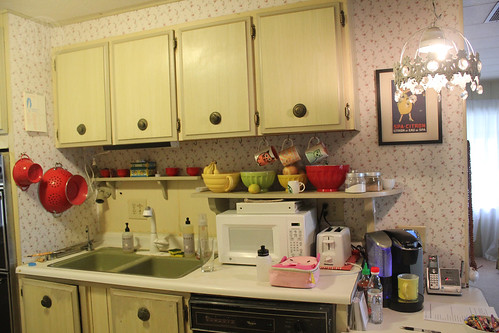 Ugh. How am I going to make this work? You see this kitchen? Charming you think? Shudder. The wallpaper offends me so badly that I think I’ve blocked it out. It’s like a weird vibration in my head that makes me only see white where the little flowers are. But then I got this idea that I would rip off a part of the wallpaper near the sink. It had some water-staining and was really driving me crazy. I thought I would do what I did in my bedroom and go with the whole I-live-in-a-run-down-Parisian-apartment look where the ripped wallpaper reminds me of an Anthropolgie ad.

It did not work. Now I have a big blank spot over the sink that is still water-stained and your eye is drawn to it because it is NOT wall-papered!!! I might as well install neon signs pointing at all the ugliness. This would not be a big deal if the weather was great. I would just route everybody straight to the backyard and they would avoid the kitchen but now all my guests are going to be filing through my kitchen and silently judging me. I just know it.

If I had a man around the house I would ask him to paint all the wallpaper red for me or maybe pistachio green to match the cupboards. (Boy, don’t I seem like a catch?) I would do it myself except all those shelves would have to be removed (and the screw holes are puddied) and there is this light fixture contraption near the sink that my Grandpa installed that is bent on electrocuting me. I already tried to de-install it once and it zapped and ker-powed at me like a comic book villain. I’ve decided to leave it alone. So I don’t think this kitchen eyesore is going to be magically beautiful before the party. Back to blocking it out.

Did I mention that we went to one of Bug’s friend’s party this last weekend and they had a huge perfect house where they regularly host weddings in their living room? Yeah. No pressure. None at all. How does one go about canceling a party at the last minute again? Can I just board up my house and pretend I don’t live here? 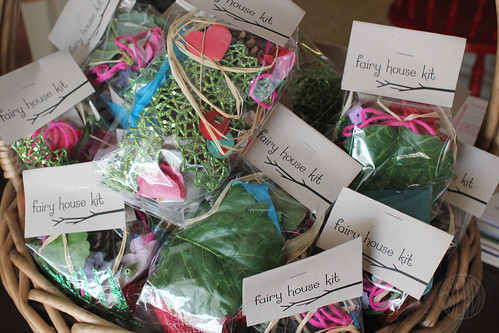 Let’s talk about what is working. The craft ideas for the party are going along swimmingly. I know it’s hard to tell when I’m being sarcastic and when I’m not but here I’m actually happy about something. I decided to use Momfluential’s idea for fairy house kits. All those floral supplies I have on hand totally saved me. I didn’t even have to buy one thing to make all these bags up. It’s kinda scary that I have that much crap on hand but hey, it works out. I get to get rid of a lot of stuff and the kids get make fun fairy house with odd bits and bobs. I hope they are into it. I know I will be. I am all over this kind of craft like a fly on…nevermind. You get the picture. It’s going to be fun. 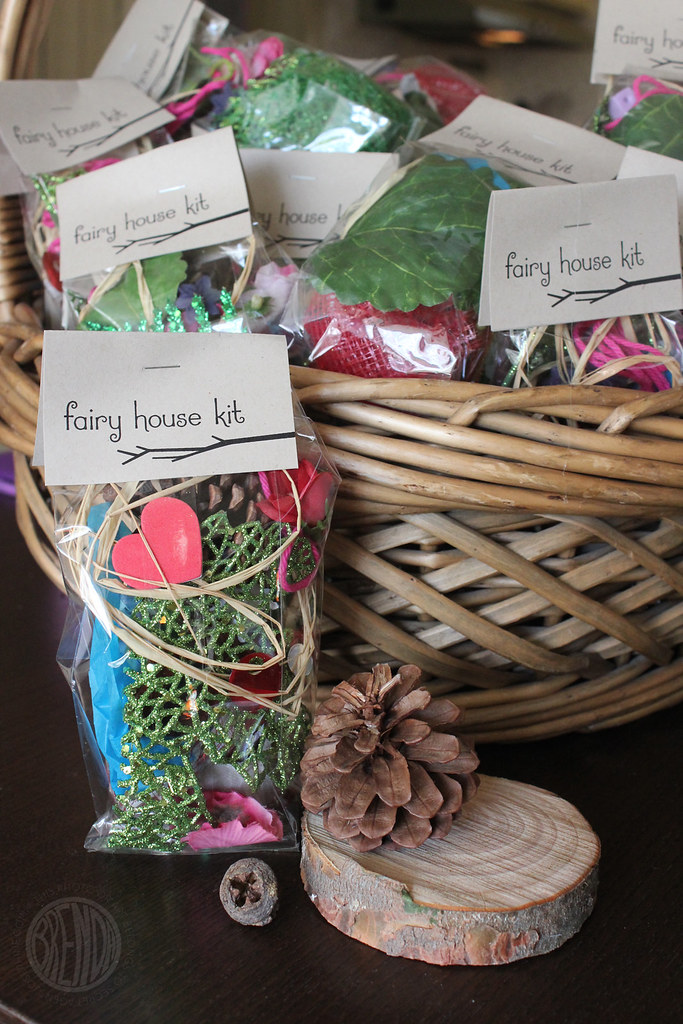 I think I’ll give each kid a stump disc and maybe some putty to stick things into. I was going to be on glue-gun duty but I decided with thirty-some kids they’d probably all want me to glue something and one of them was bound to get burnt. Since I don’t know every kid as well as I usually do I think I’ll pass on all the possible lawsuits. I think they can manage with sticks and putty and chennile stems and string. It’ll be fun. 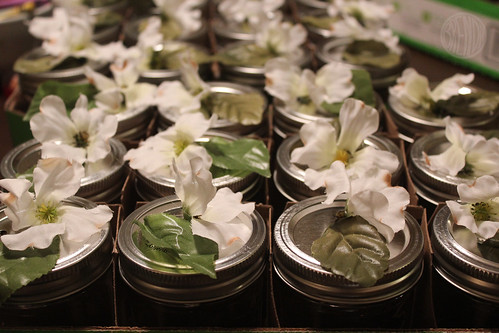 The next thing that is working are the fairy drinks. I bought a whole bunch of canning jars and covered the printing on the lid with some silk flowers. 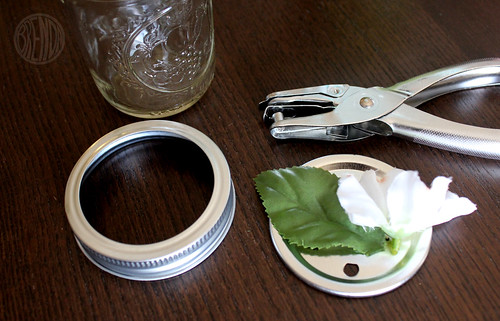 Then I punched a hole through the metal lid with my trusty metal hole-puncher and my super human man-hand strength. Actually, I only did one. It was pretty tough but it can be done. I’m leaving the rest of the lids for Saturday and I’ll let my Dad do it. Or any other random strong person who comes around. 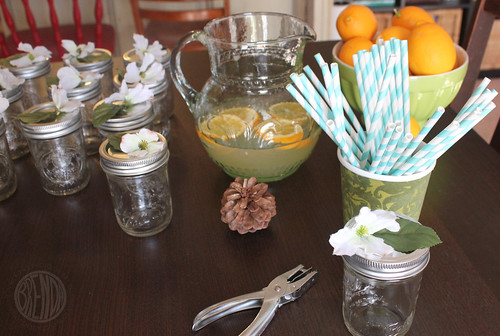 Then I filled the jar with ice, a lemon slice and some delicious homemade lemonade from my backyard. I screwed the lid back on, stuck a pretty striped straw through the hole and presto! A perfect fairy drink! 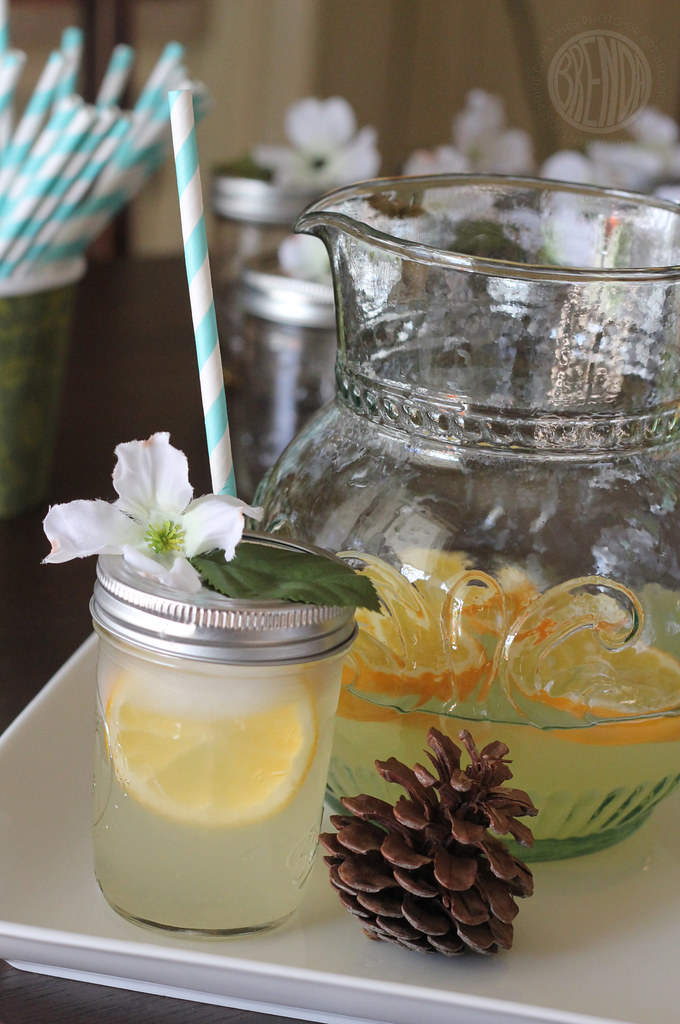 So I’m making it work. When the sun comes out I’m pretty positive.