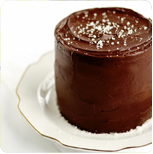 This is what I want to make for Bug’s birthday cake. She’s asked for a “stump cake.” Wouldn’t this be amazing with some chocolate branches (sort of like this but more stick-like, is that possible?) and meringue mushrooms around the bottom? I’m probably dreaming too big but it’s fun to think about. I wish Bethany lived closer. 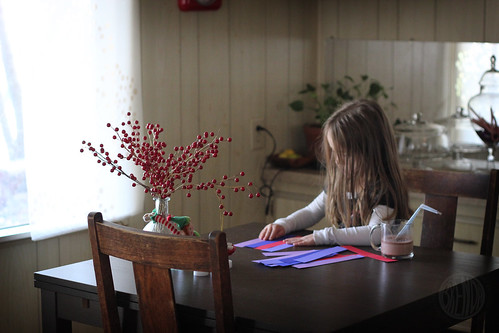 You know, having a birthday in January is pretty awesome. I know back when I first discovered I was pregnant and calculated my due date, I was afraid. I thought it would be a terrible thing to have a birthday in such a dark winter month right after Christmas. I imagined that we’d be so over presents and festivities that her birthday would get overlooked.

Who was I kidding? Me over presents and festivities? That’s like asking me not to breathe. We might be a little strapped for cash in January but that never stopped anyone in my family from planning the perfect theme party.

January is the perfect month to have a birthday. If anything, it helps us get through the winter months with something fun to look forward to. 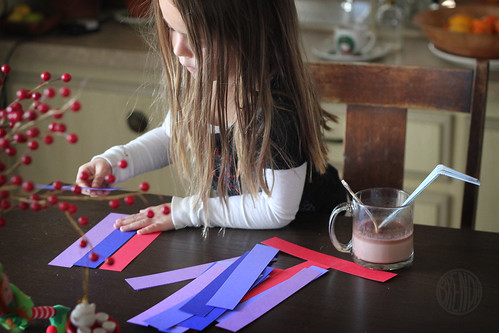 An aside about my child’s rat’s nest hairdo: We were on vacation and that is what her hair does if you just wake up and don’t comb it every fifteen minutes. We call it rockstar hair. I used to have a complex about her hair. It’s so fine and is messy more often than it’s brushed. I thought everyone would judge me and think I didn’t love my child because she always looks uncared for. But then one day I saw a magazine spread about some rockstar’s kids. There they were in their Gucci outfits with their Prada shoes playing with their organically hip toys with HORRID MESSY HAIR! Except they didn’t look like ragamuffins, they looked like happy kids. So I decided to get over Bug’s messy hair and call it rockstar hair. 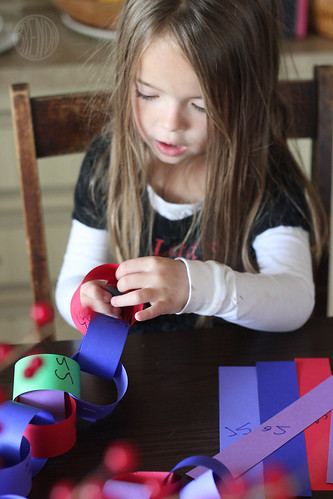 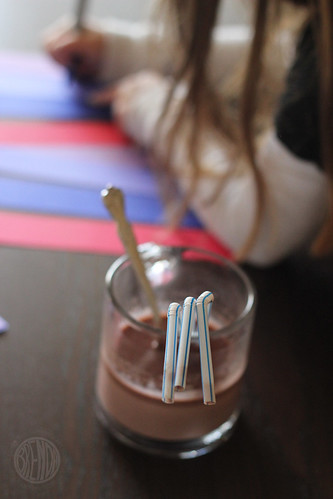 As you can see, Bug is making a paper chain. It’s a count-down-to-her-birthday-party chain. I thought Bug would make one of these in school for Christmas but they didn’t. They probably don’t hype the holidays as much as I remember when I was a kid because of all the political correctness. So I figured, why count off days on the calendar every day when cutting up a bunch of strips of paper is just as easy? And it was a simple craft that she could do pretty much by herself while I busied myself in the kitchen with dishes or something.

As you can see it went perfectly with a cup of hot chocolate with THREE straws. Don’t ask. It’s because I keep the straws in an easily accessible spot and she helped herself. I probably should enforce some rules about that but I figured it wasn’t going to hurt. We rarely use straws so tripling up now and then is not the end of the world. 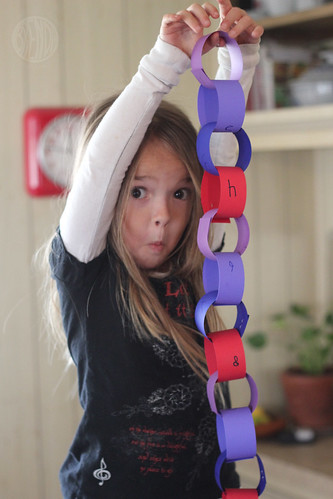 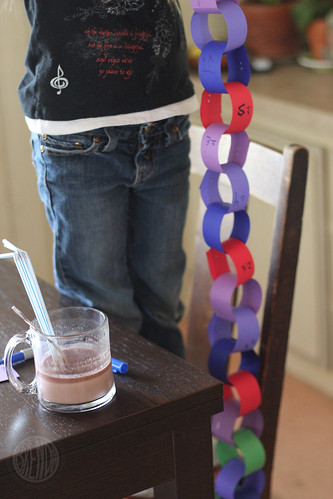 She made the chain pretty much all by herself. Backwards numbers and all…it was a good exercise in number-writing and following a pattern. Bug is a freak about color so she needed very little encouragement to make a color pattern. In fact, it was her idea and I had to calm her down when she skipped a number and we had to throw in a lone green loop to keep from having to start all over again mid-chain. The horror! A green loop in the middle of things! It’s a good thing Bug has me for a mom because I am the queen of not being a perfectionist and I can help balance out her type-A tendencies. Shrug it off, I say. Though I’m sure we’re doomed to a lifetime of not understanding each other. 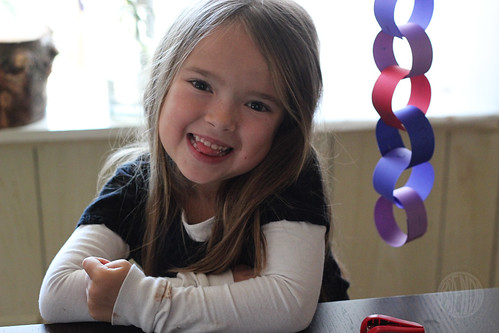 Anyway, we’re on the countdown. You know what that means: Party-planning time! My favorite time! I couldn’t care less about the actual party. If I could be invisible at the party and just hover around watching everything and taking pictures, I’d be much happier. But of course that’s not the way things go. I have to actually socialize and eat. Such a burden. Ha ha. Just kidding, mostly. 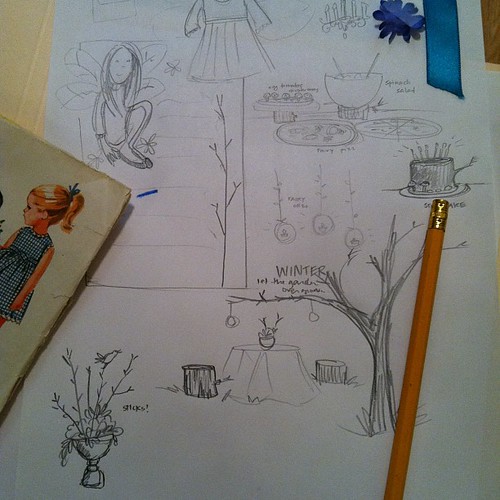 Here are the beginnings of the process. We’re having a fairy party in the backyard. I’m going to let the grass grow and pretend it’s an overgrown wonderland. There’s a pine tree in my front yard that badly needs cutting down so my dad is going to take a chainsaw to it and save the stumps for chairs. I hope it doesn’t rain. 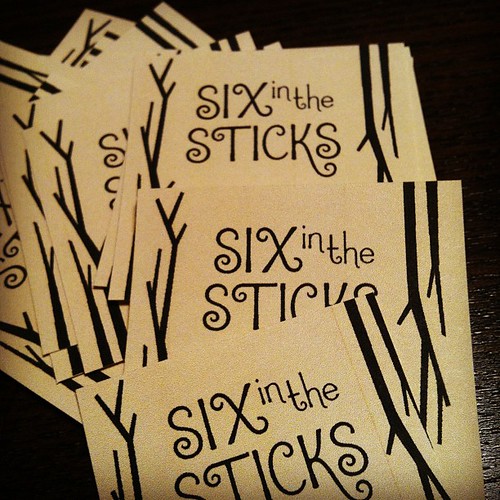 I’m calling the party “Six in the Sticks.” Why not!? We might as well capitalize on that happy coincidence. 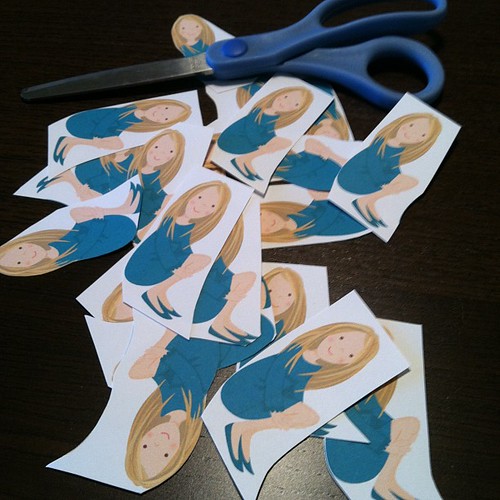 I’ve made the invitations that included cutting out about thirty-seven hundred little Bug fairies. Yes, I am insane. But these little insane things make me happy. I’m a very happy insane person with sore hands. 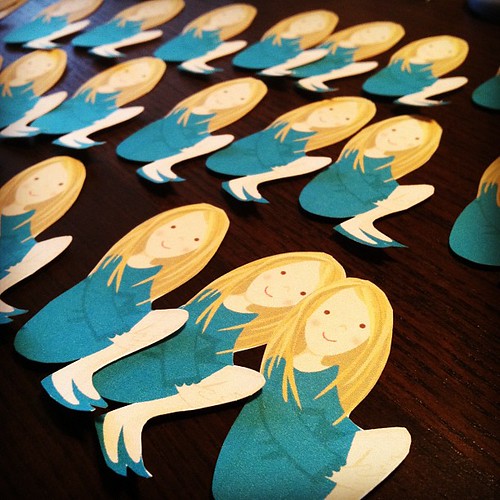 It’s a Bug army! (thanks to an instagrammer for that line) 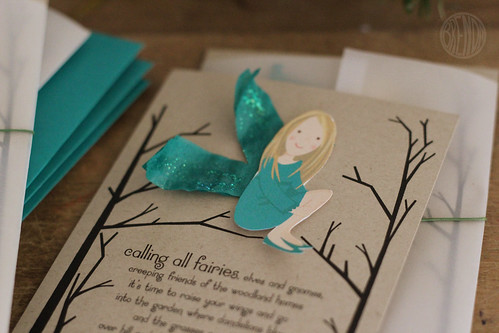 I attached tissue wings (glitterized with a few finger-swipes of glitter glue) to the Bug Fairy and then taped her to a brown paper invitation with a funny fairy poem and some stick graphics along the sides. It actually worked out pretty well. 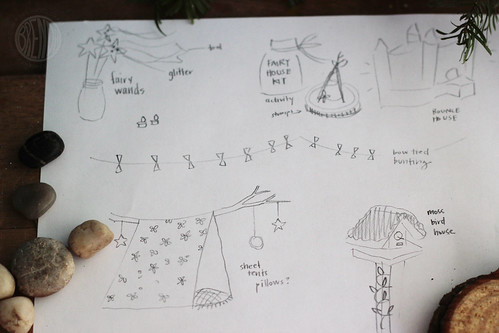 I’m trying to play up a woodland version of fairies instead of all that bright synthetic Disney crap. I had enough of that last year. In my vision I would have girls romping in Victorian dresses with gossamer wings and brown paper fox-head masks. Maybe the fox-head mask is a little weird. I don’t know. I secretly want to grow up and be a photo stylist for Vogue but fairy parties is where I channel that frustration. 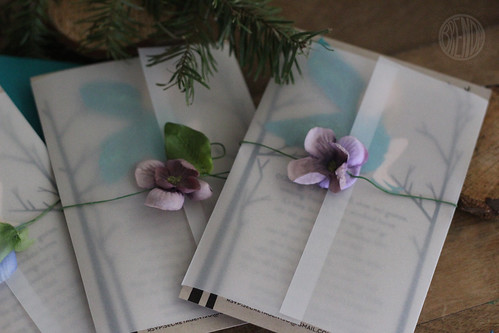 Then it’s all tied up with a half sheet of transparent vellum and tied with these really cool wire flowers that my mom bought for me last year from some half-off clearance sale at the local fabric store. I think they turned out pretty cute. Now I’m just worried they’re too fancy. 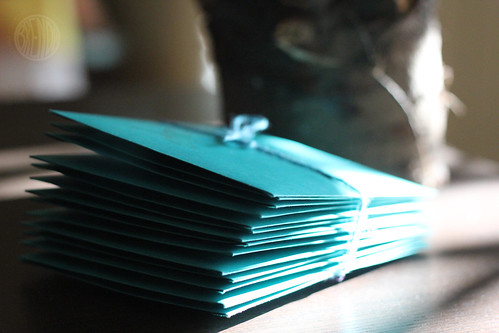 I have a little bit of a dilemma. I wanted Bug to invite two or three of her best friends from kindergarten but we couldn’t figure out which girls to invite. She likes one girl very much but I know when I drop her off that there are at least two or three others who are so sweet to her. They always make a special point of saying hi and shouting across the playground at her. Many of them comfort her when she’s crying and having anxiety attacks about school. I couldn’t figure out which girls they were so I caved and invited all of them. Thirteen girls!!! I can’t handle thirteen little girls!!! I really hope they don’t all show.

I’m worried that when the parents see this super fancy invitation they are going to think they can score some swag at some rich kid’s party. Big surprise they’re going to get when they roll up to my classy mobile home. But I’m hoping that since her school is way on the other side of town that most of the kids won’t come. Is that how things work? Most of the parents are much younger than me and I don’t think we have much in common. I don’t know. Toby promised to pay for a bounce house so I’m hoping that will handle all the kids.

1. I have a little giveaway going on my review blog for anybody with a new baby. It’s kinda fun.

2. I have not finished that heartfelt, big, meaningful post that I promised you. Every time I promise something it seems to be the kiss of death. Ugh. The thing is that it is not my story so I’m trying to sort out the details with a friend whom I’m writing it for. I did promise her I’d write it though so I do really really want to keep my word. You’ll see when I finally get it done.