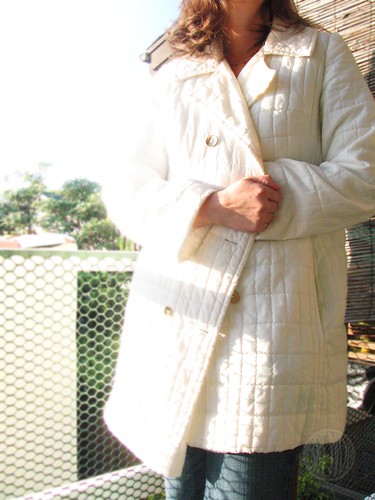 Home again, home again. Poor Toby, he’s been eating leftovers for a week. I’ve spoiled him over the years and even though he’s a perfectly good cook, he never cooks for himself anymore. Even when he’s starving. You could say I have job security. He missed his girls. So we’re back and I’m up to my ears in household chores. Which is fine. Them’s the breaks. 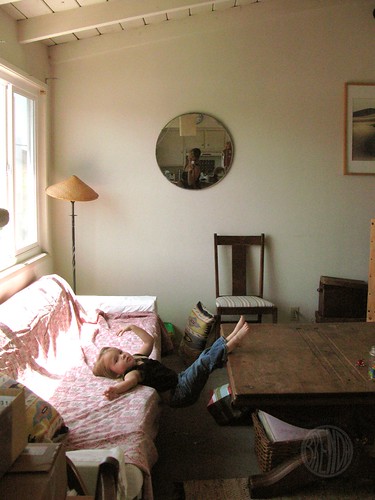 When we got home yesterday I wasted all day doing I have no idea what. Probably forgetting that I have a job and that job is to run the household or something like that. So suddenly when it was time for dinner, I was nowhere near ready and we had a fun Flashlight Easter Egg Hunt Carnival to go to in about five minutes.

I stressed about it for two minutes, tried to call Toby for the other three and then just jumped in the car leaving him a scrawled note about a frozen pot pie in the freezer. I knew he would be bummed but you only get to go to a few flashlight Easter egg hunts in your life before the fun of it wears off. 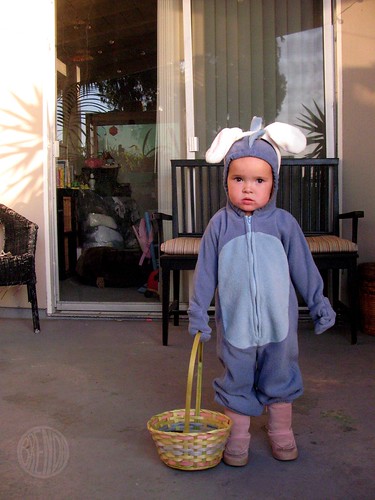 Bug wore her hand-me-down dinosaur costume with some bunny ears stuck on her head. I know it’s not very Easter-y but I thought she looked adorable. She seemed to be into it too. I thought it was a great outfit until we were at the carnival and some little girl screwed up her face into a scowl and said, “You don’t look like a bunny.” 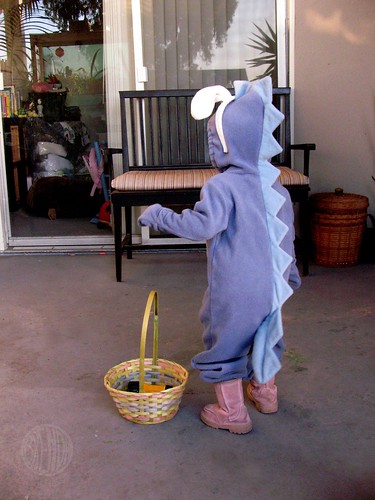 Bug took the insult in stride, like kids will do when they don’t quite understand the cattiness that we adults layer onto a sentence like that. The little girl was only stating the obvious. But I have to admit that a small part of me wanted to smack the little girl into next Tuesday and the other part of me wanted to run home and dress Bug in something more “normal.” What was I thinking dressing her up as a dinosaur for Easter?!! 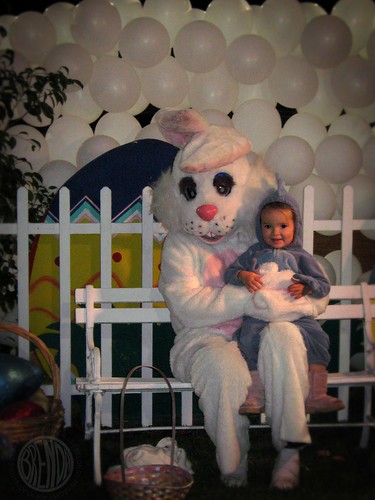 Oh yeah. I was thinking of the cute photos I would take. Or NOT take because we got to the carnival so late because I got lost. We completely missed the flashlight Easter egg hunt because I couldn’t find the park. I have been looking at the sign for the carnival all month but never actually got around to googling the park address. I thought I knew where it was but after a half an hour of driving down the street that had the same name as the park and not finding said park, I finally had to call up my mom in tears. It turned out the park was in Irvine which is the kiss of death when you are trying to get anywhere on time.

I swear stoplights in Irvine are timed to be five minutes longer than normal stoplights. You will sit at an intersection for what seems like forever, strumming your fingers madly on your steering wheel, while nothing but space and birds fly by. No cars. Just space. Then finally when a car comes from the opposite direction, then the stoplight will stop them and let you go. I think the city engineers are down in some basement lab playing video games with my life. They jump and shout for joy when they can keep me from going across town in less than ten minutes. I hate Irvine.

So anyway the Easter picture! Ha ha. This photo cost me five bucks. It also shortened my life by five years. I wasn’t going to pay for a silly Easter Bunny photo but after we missed the flashlight hunt I felt really bad for Bug. All the other kids were carrying their baskets filled with eggs and she had nothing. The goodie bag station was shut down and all the rides were either for big kids or had lines a mile long. She really wanted to hug the Easter Bunny so I caved.

While most kids would be afraid of such an evil looking rabbit, Bug loved her. She marched up and happily sat on her lap. I took the photo you see and the carnival photographer took another. Then we waited around for our photo. It wasn’t done so we found something else to do. We made bunny masks and tried some blue cotton candy (which I’m happy to say Bug did not like…it tasted like stale bubble gum).

I knew that the photo was NOT worth waiting around that long for but I had spent FIVE dollars on it. FIVE DOLLARS! I was so mad at myself. Why am I so dumb about things like this? I should have walked away but every time I asked them how much longer it would be, they promised me that my photo was only five minutes away.

I should have asked for my money back but the girls operating the ink jets were only high school volunteers and they couldn’t help the fact that earlier in the night someone had tripped over the electrical cord running the printers. Part of me just felt bad for them. I remember being that age and having customers irate with me.

Finally the photo spit itself out and it looked like crap. Of course! All I can say is that next year we will get there early, park closer and leave before it gets dark. Also, I’ll make dinner plans. Like maybe a pizza and a cocktail.

*first photo is my final photo for 7days. Farewell 7days! See you in the summer!