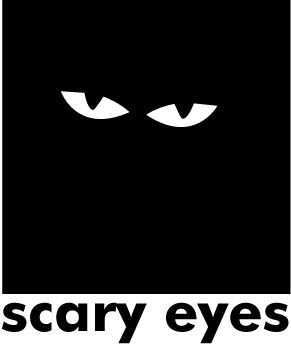 I’ve noticed Baby Bug is a bit of a drama queen when she thinks she might get attention for being afraid. I don’t mean to belittle fear at all because I know things can be very very scary to a two-year-old. But I’ve also noticed that sometimes she “acts it out”.

Maybe we’ve read too many books and watched too many TV shows about the subject of fear. I don’t think this is the case with most children but I actually do think that Baby Bug learned how to act afraid from these shows and books.

She’s taken to pointing at my jacket that hangs on the back of her bedroom door and started saying, “scary eyes!”. Then she’ll hug me with all her might and bury her head in my chest. Five seconds later she’ll laugh and smile like that was the funniest game ever. Let’s do it again! Ha Ha!

I know she is not seeing any real “scary eyes” because it’s not like she’s quivering with fear when she says it. I can’t see any scary eyes when I look at my old lumpy green coat but then I’m an adult and I’ve long learned to not see those sorts of things anymore. But the kicker is that she says this in the daytime and not at night when a lump of a coat in the dark might look like something scary.

I think she is thinking of this Berenstein Bear book about being afraid of the dark. It might be a little too old for her. She might also be thinking of a Curious George show about how coats on a rack look like a giraffe or something. I don’t remember the episode exactly. Or maybe not. Who knows. I’m just the mom around here. Maybe she is just making stuff up because she can.

So I’ve been thinking… should I not be reading her these books about fear when she doesn’t even really know what it is yet? Or is she just acting things out because she can and she’s dramatic like that? Oh she is… one of these days I have to tell you about how she feigns shyness when strangers talk to her. She’s a total faker!

But anyway I’m wondering if the power of suggestion was a bad thing or if this is just her way of playing. After all “play” is how kids figure things out right? Am I giving her tools to help her with fear or am I pushing her into being afraid a little too soon? OR am I just plain thinking too much! Probably the latter.

Speaking of power of suggestion, one day while in the mall I was explaining to my mom on the phone why I wasn’t going to take Baby Bug to see Santa. Not thinking about Little Miss Big-Ears sitting in the stroller next to me, I might have said something like, “I’m not going to take her to sit on some scary old man’s lap.”  And of course Bug heard me and remembered and started telling me she was afraid of a scary old man all the time.

At first I panicked. What scary old man could she be talking about? When had she been around a scary old man?  I couldn’t think of any time. She is always so sociable with elderly people.  At times I’ve been afraid of their well-meaning but somewhat scary faces coming at her so close and thought, oh no, she’s gonna scream. But no, she just smiles back and is as friendly as ever. I’m so proud of her lack of prejudice.

I asked her about it and finally put two and two together that she was talking about the “scary old man” she overheard from my phone conversation. Me and my big mouth. I really have to start paying attention to what I’m saying when she’s around.  Never underestimate the power of suggestion. She wasn’t afraid at all. She was just parroting something I said. She does that.

A few times she’s woken up crying at night with real fear and I’ve asked her, “Did you have a bad dream?” She’ll nod and cuddle but that’s as far as that goes. I don’t know if she even really knows what a bad dream is. Someone told me once not to ask her what her dream was about because if it was a nightmare it will be harder for her to go back to sleep if the memory doesn’t fade. So I don’t. But I’m oh-so-curious.

What’s funny is sometimes in the middle of the day when she is not sleeping, she’ll get startled by something like a loud noise outside and turn to me and say, “Mommy! I had a bad dream!”

I have to chuckle.  She’s associating having a bad dream with being startled or afraid.  It amazes me sometimes how she communicates so well with her limited vocabulary. She might not have all the words but she’ll put the ones she does know together to say what she wants to say.

I’m not terribly worried about her pretending to be afraid. I think she’s just being Baby Bug and doing “her thing” but part of me wonders when the real fear will kick in and how she will deal with it. I had terrible nightmares as a kid. I hope she doesn’t take after me.