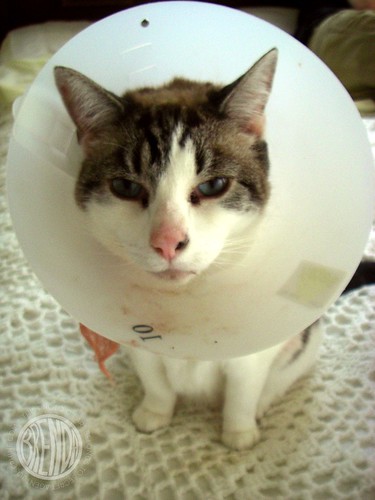 Poor Lily. She has to wear a cone.

If you know Lily at all, you know why this is particularly horrible for her. She’s a licking sort of cat. Always licking licking licking. When she was a kitten she would lick us constantly and sometimes lick up whole big long pieces of string. She gives herself baths all day long. Thankfully she usually seems pretty healthy. She doesn’t lick one spot and lick herself bare like some pets I’ve known. 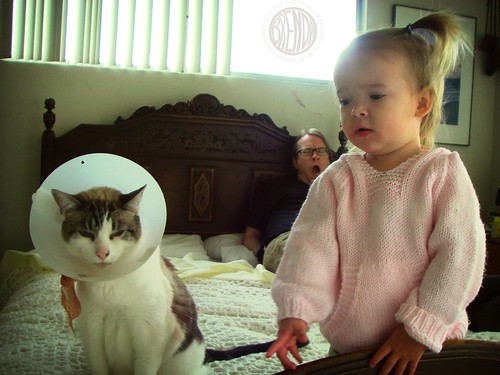 So anyway, she had a tuuuuuumor (say that with your best Arnold Swartzenegger accent). She had it for a long time. Like a year or so. I know, we are horrible pet owners. But seriously, she seemed fine. It didn’t seem to bother her so we didn’t really worry about it.

It got bigger and bigger and after a while it seemed like she was growing a fifth leg so we took her to the fancy schmancy cat vet. That was a bad idea. They wanted $1000 to do surgery. Toby didn’t think that was necessary. He thought he could remove it himself with a syringe. Toby worked in a free medical clinic during college and removed tumors from humans… so he’s not completely full of hot air. He probably could do it. But who wants to? Gross! Tumor! Yuck!

We decided that we needed to find a cheaper vet. That was easier said than done. Everything is so expensive where we live. You can’t just open the phone book and look for an ad that says, “cheap”. In fact, most of them advertise silly things like “brass beds for your pampered pet”. Oh please. My cat does not need a brass bed. She likes sleeping in cardboard just fine. Not that I don’t love my cat and enjoy spoiling her, I do. I just don’t trust vets.

I know there are “free clinics” for spaying and neutering. It was just a matter of finding one. After some sleuthing (and a field trip or two) I finally found an adoption agency that gave me the low down scoop for affordable vets. Sure enough, just a little trip to Little Mexico (aka Santa Ana) and I found a vet that was excellent.

They were really great. I’m going there again. It was clean and neat and organized. There was a separate entrance for cats and dogs. The girls behind the counter were quicker and more organized than Baby Bug’s pediatrician office. (Which doesn’t say much since I think the girls at Baby Bug’s doctor’s office are all on Valium or something.) They were more on top of it than Starbucks. I think they have to be because they were very busy.

But that wasn’t all. Everyone was cheerful. There were animals coming and going all the time and no horrible yowling or yipping. You didn’t hear yowls of pain coming from down the hall. The pet owners seemed really happy too. Probably because they weren’t thinking about how they would have to sell their first born so they could pay their vet bill. 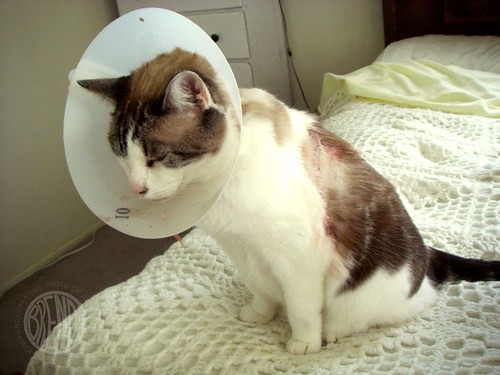 It could be a facade. They could just sedate everyone. But I don’t think they do. When I went in to talk to the doctor about Lily, he was very kind. I expressed my concern about anesthesia because once I had a pet go into surgery and never come out. He reassured me that Lily was very strong and would be fine. He said they’d never lost an animal during surgery. He would also make sure she wasn’t in pain, which relieved me some because part of me always wonders if they cut corners on pain blockers since it’s not like the animal is going to tattle on them. 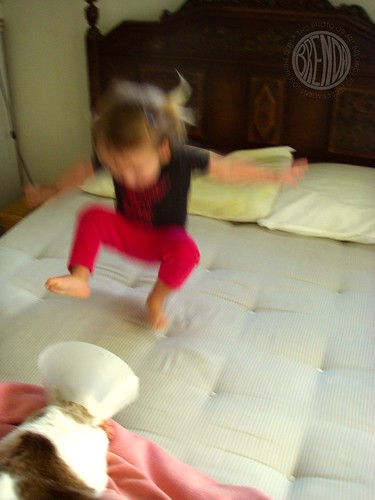 We had to leave her there for the whole day. That was a bit rough. Baby Bug cried her eyes out. The girls in the office of course thought that was adorable. We love Lily a lot and it shows, even if we don’t take her to the vet to get her tumor removed for a whole year. 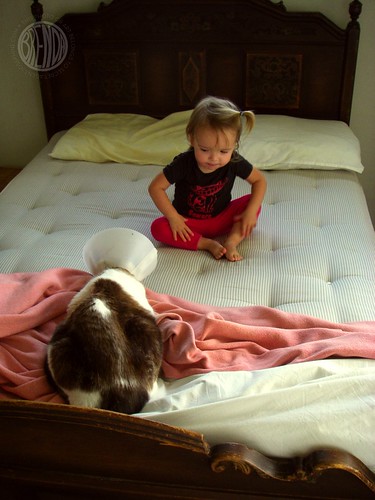 Lily is home and totally fine. She purrs up a storm the second we scratch her head. She doesn’t like her cone too much. She bumps into things and eating out of her food bowl has been a bit of a challenge but it hasn’t stopped her. 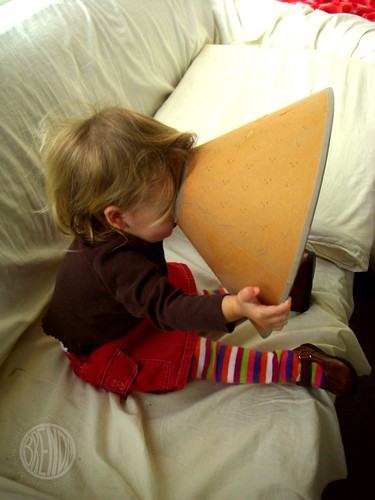 In two weeks we will take Lily back to the vet to get her sutures removed and her cone off. In meantime we are having fun wearing lampshades on our heads to commiserate.