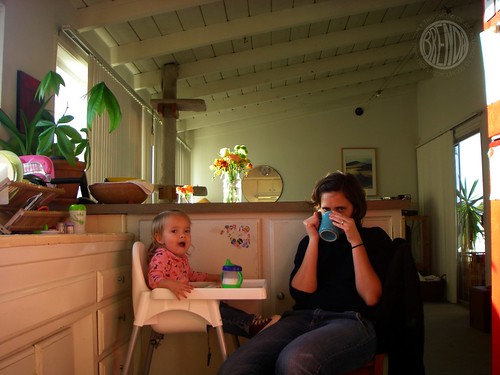 had several moments today. Today was chock full of moments. In fact, there were so many moments, I feared that if one more moment hit me I would completely snap and run for the hills screaming.

Pounce is sick. I don’t know what’s wrong with him. The vet doesn’t know what’s wrong with him. We got an x-ray done and all it shows is that he has a lot of air in his stomach and his esophagus. The air could be from all the choking and gasping and yowling he did on the car ride to the vet or it could be something really serious. We don’t know. We’re supposed to take him to a specialized clinic in a few days if he doesn’t get better.

But even though I’m sadder than sad about Pounce, that was not why I had so many “moments” today. Today I think I fully understood the wrath and wrangling of a full-blown-two-year-old. It’s true. The twos are terrible! Worse than I ever imagined and Baby Bug is probably a pretty good kid. I do not know how you parents of multiple kids do it. I’m ready to wave my white flag in defeat. She really got the best of me today.

It was probably not smart to take Baby Bug with me to the vet today with Pounce. I didn’t really have a choice since Toby’s been working like a mad man and I don’t have a list of babysitters handy to help out when a sudden cat illness might strike. But I went early and I thought I could get him in and looked at before lunchtime and nap time. It’s a first-come first-serve sort of clinic and you just never know if you’re going to be lucky and breeze right in or if you are going to be stuck in the waiting room for a few hours.

Play this clip over and over for three hours straight with no break. It sort of sounds cute at first but quickly that one note (a b sharp perhaps?) starts to get very very very old. It’s sort of like Chinese water torture.

Then imagine that you are trying to translate the whining into English and you have to pay attention or else a five alarm dolphin squeal will go off in your ears and break windows. Then imagine Baby Bug throwing herself on the dirty veterinarian waiting room floor, slathering her wet snotty tears in cat urine.

THEN imagine that there is a crotchety old @hole of a man in the waiting room making loud comments to the girls at the front desk about you and your poor mothering skills. I know I should not care what old crotchety @holes say but I guess I was not born with that amazing ability to let stuff like that roll off my back. I don’t really care what he thinks. I know he’s a mean old man and he probably needs a drink but it didn’t stop me from sweating and stressing about how to keep Baby Bug quiet.

Nothing worked. I tried to color with her. I even offered to let her draw with my favorite Sharpie pen. I threw her in the air and made funny sounds. I let her comb my hair and poke me in the eye. I invented funny games of jumping over the lines in the linoleum. I gave her cookies. I let her dump the contents of my purse. I even let her climb on the magazine rack. Nothing stopped the whining. Nothing! It’s a constant with her these days.

I kept telling myself that how you act under stress shows your true character. It’s my mantra these days. Be calm. Do not freak out. Do not yell at the two-year-old. Do not start crying. Do not threaten to put the two-year-old in the smelly urinated in cat carrier. What would Jesus do sort of stuff. I barely held my crap together today. Barely.

I know these are the precious years. I know it’s important to enjoy every moment. I know they fly by fast and you never get a chance to do them over again. But man! Can I do this? This is harder than anything I’ve ever done! This is harder than that one time I had to interview the president of my college about a sexual harassment scandal. And that was NOT easy. Believe me.

Now that she’s blessedly asleep (no nap today) I am a little bit proud of myself that I didn’t lose it. I may have sweat blood out of my arm pits but I didn’t slap her like I wanted to so badly. I didn’t yell. I didn’t even call Toby crying until after we were in the car driving home. I almost… pretty much held it together. It didn’t feel like it but it’s over.

Now I can just worry about Pounce and hope that tomorrow is a better day.