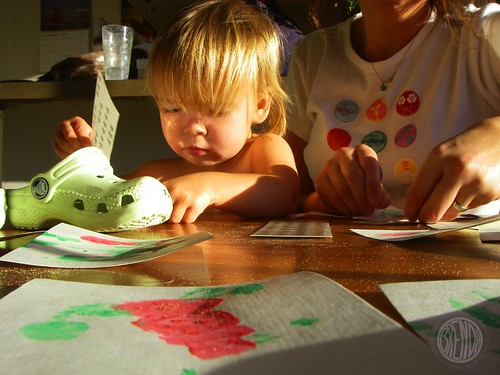 We made Christmas cards today. You’re thinking, “How proactive SAJ is…” but you would be wrong. Usually I put things off to the last minute because I work better under a little bit of stress. But in the case of these Christmas cards, we started them early because I wanted something fun to do with Baby Bug.

I’m not sure I would recommend this project for all mothers of nearly-two-year-olds. You can definitely do it but it did involve a lot of clean-up throughout the whole process. Of course I didn’t plan very well so I was carving the potato stamps while Baby Bug was awake and scrambling up on a chair so she could climb on the counter and try to grab the knife and “cut like mommy.” I definitely don’t recommend doing that. 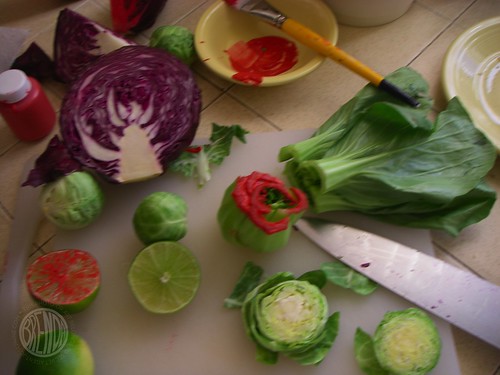 My initial idea was to use a head of cabbage, cut in half, to stamp. I had this vision of a highly detailed red tree on cream colored paper… not unlike the coral designs that have been showing up on so many pillows these days. That idea failed miserably. I’m sure it would work but not with washable kid paint. The paint was too thick and it just glomped on the paper like a soggy wet dog nose. It was fun to play with but not very tree-like at all. 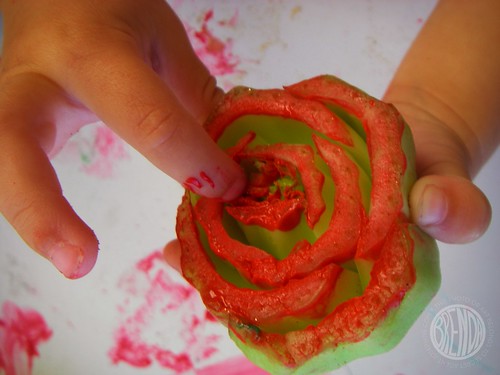 The only vegetable that really worked was the baby bok choy. Chopped near the base, it made a very pretty rose. Not a tree… but still nice. I love bok choy. Not only is it tasty but it makes a pretty stamp! I know you all think it tastes like some kind of green cardboard or kale or something but you would be wrong. It’s like lettuce but with a hint of spice. Chop it up and put in your next stir fry and you will thank me for how healthy you feel. 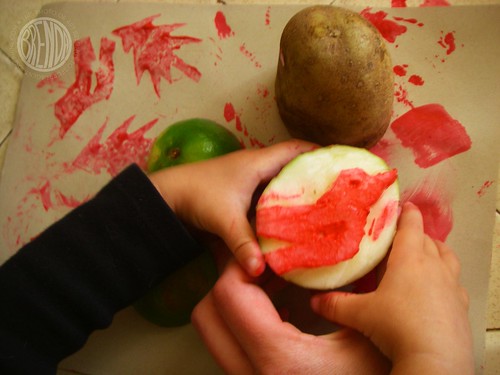 But we weren’t talking about dinner; we were talking about a Christmas card project! We were talking about a messy project. I finally gave up on the vegetables and decided to use the potatoes I had left over from Thanksgiving and make good old-fashioned potato stamps. I know everyone has done this and it’s so not original BUT cut me some slack because I am doing an art project with a nearly-two-year-old! 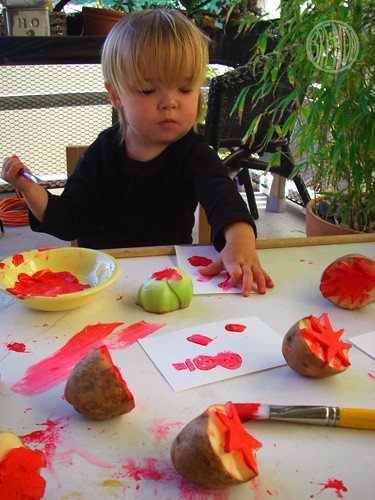 A nearly-two-year-old who likes to make big messes! She didn’t want to stamp. She wanted to paint. She painted the cards, she painted the table, she painted the potato stamp (the side you need to hold when you are stamping, of course). She painted some brussels sprouts and some rocks and even the pumpkins I still have left over from halloween but just don’t the heart to throw out. She even painted her feet! Give that girl a paint brush and she will paint the town red, literally. 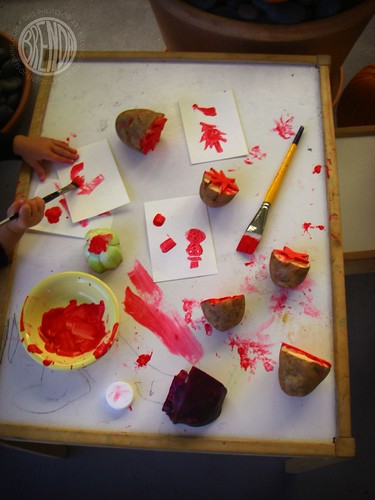 I was bellyaching to Toby about how messy she is and how I don’t know why I do these things (this was after she threw the star potato stamp off the balcony and gouged a hole in the snowman stamp with her fingernail), and he chuckled and said, “Admit it. You love this. You’ve been waiting your whole life to make messes like this.”

I had to admit he was right. I do love this sort of thing. The hours in the day flew by while we were in the thick of it. I’ve been doing these sorts of projects for years with borrowed kids—kids I babysit, nieces, kids that people brought to work and then sent to my office so they could get some work done… It’s about time I finally got to do this sort of thing with my own kid. 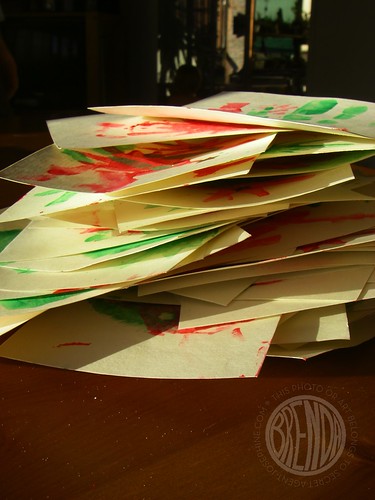 I can’t wait to send them out and brag about her.

If you noticed this post was not riddled with as many errors as usual, it is because Bethany Actually edited it for me.