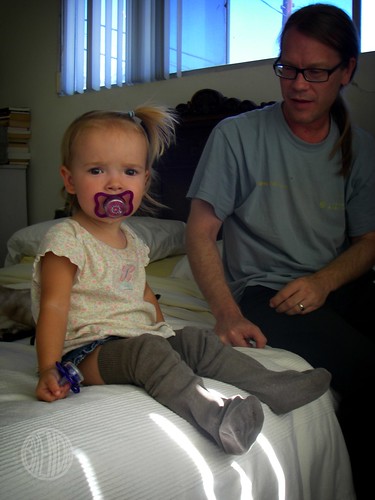 My daughter is a goofball. I don’t know why this surprises me. It’s not like I’m normal and boring or anything. But it does surprise me. Every day. I say this jokingly and affectionately but I think she has obsessive compulsive disorder. Or maybe it’s a toddler thing. I do not know.

She’s just funny about things. She’s very particular. Things have to a certain way. It’s not like she throws a temper tantrum if we put the wrong shoe on first but she lets her opinions be known loud and clear.

Like the color green for example. She LOVES the color green. Everything has to be green. When she gets up in the morning and I ask her what she wants to wear, she screams out GoooooReeeeeen! And then I pull my hair out because the two green shirts she has are in the laundry (they always are) and I really don’t want her to wear the green cordoroy dress that is hot and sweaty when it’s 90 degrees outside. 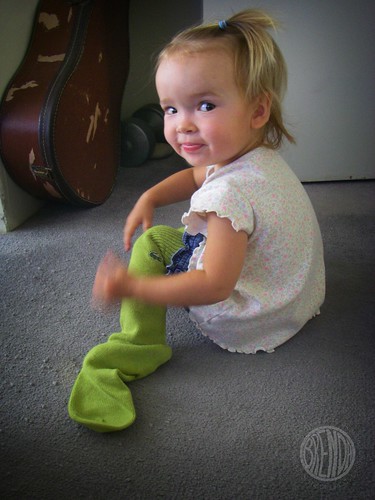 So it should take us by no surprise that she fished Tobys’ green socks out of his drawer after they had their “Daddy Socks, Baby Socks” session. She thought trying on Daddy’s socks was a hoot and a half. Then later, when Toby was in the shower, she was mysteriously quiet in our bedroom while I was out in the kitchen.

One of the first rules of toddlerhood that I’ve learned since Baby Bug hit 8 months or so is this: A quiet toddler is a naughty toddler. Sure enough she had upturned his entire sock drawer and pulled on the one pair of socks that he never wears. The bright green ones that I bought him about a zillion years ago. 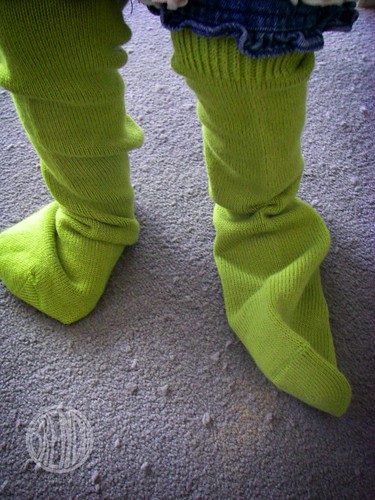 It’s perfect. He never wears them. She loves them because they are green. So from now on they are Baby Bug’s socks.

Another funny thing about Baby Bug is that she likes make up little skits. Or repeat things that we’ve said over and over that really have no meaning but sound fun to her. Or maybe they remind her of something funny that we laughed about earlier and she wants to recreate that moment over and over. It’s just funny because I know her little skits by heart and we’ll go on and on with them all day long. 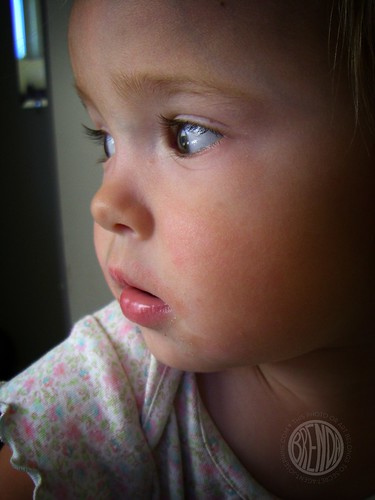 I wish I was video blogging because I could explain this way better in person. I’ve been trying to record her for months but it seems like every time the camera is rolling, thats when she decides to stray from her normal routine which blows the point I am trying to make.

For example when in her high chair she will say:

And then that’s it. But then she says it again.

I’m probably boring you to death with this. I will try my hardest to upload something today to prove my point. My big point is this: My kid is a nut. It’s not just the obsession with green or the little skits. It’s everything. If we do something twice then that is the new routine. She remembers things I don’t even know I do. 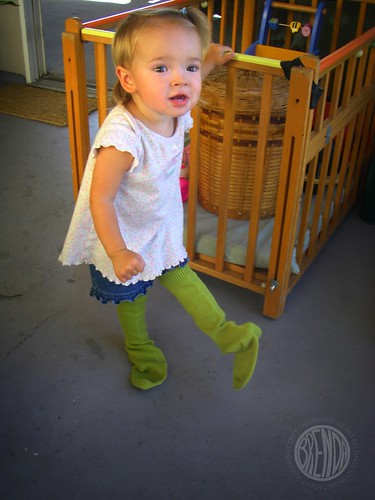 The other day I was putting her food in her little piggy plate that has separated partitions for main dish, vegetable etc etc. Well, I guess I put her frozen peas in the bottom one instead of the top one and so while I was off doing something else, she one by one picked up each pea and put it in the correct partition. It’s things like that, all day long, every day that surprise me and make me think she’s a nut.

A delightfully funny and wonderful-to-be-around, nut.

Okay, this this was the best I could come up with. Which is not good at all. It’s mostly my voice being annoying trying to get her to do her thing. Oh well… It’s the best I can do right now.