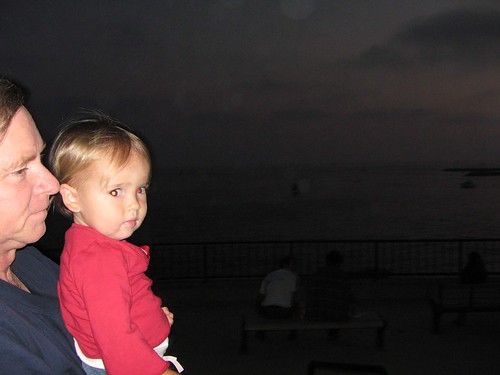 Since Toby was away, I decided NOT to drive to the dunes where we usually watch fireworks. It’s a parking nightmare and I had my mom with me. My mom is having health issues and she’s not really into walking the twelve blocks it takes to get to the prime fireworks watching vista point. Not to mention, I’d be keeping the baby up an hour past her bedtime and twelve blocks with a grumpy toddler who wants to be FREE from her stroller is not that fun. I decided we would just walk to the beach and watch something. Surely there will be something going on from the vista point over looking the ocean. You can see two piers from there and there were rumors going around that the best fireworks show ever would be going off from the Huntington pier. 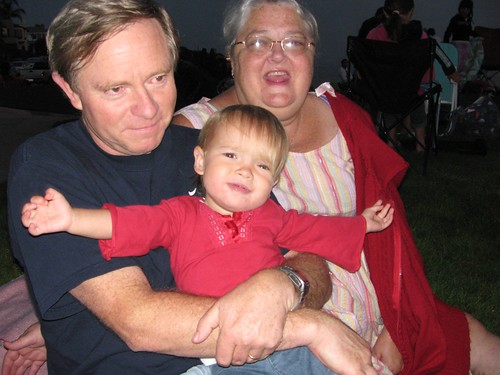 Vista Point Schmista Point. We saw NOTHING from our beach vista point. Nothing but a bunch of people who were also watching nothing. Nice for people watching but not so nice for baby watching. Baby Bug just wanted to run around and get into trouble. If she wasn’t throwing herself off the ice plant cliff, then she wanted to play in the sandy mud puddles near the very tired and over-used drinking fountain or even better—play hide and seek around the trash cans reeking of beer and vomit! Ick. Americans are pigs, especially on holidays. I love my little beach town but when the tourists come in flocks, it’s just nasty.

We sat around and waited for dark. This is actually nice since my Dad made it home from his work-aholic job (yes, he worked on July 4th) and Toby’s mom was with us too. It was a schmorgasboard of Grandparents for Baby Bug. Eventually, it was obvious that the pow-pow-crack sounds were coming from the inland direction and all we could see were dark masses of trees. So we headed home and called it a day. Happy Birthday United States! Better luck next year!

I was kinda bummed since I wanted to show Baby Bug the neato-ness of exploding fireworks and had talked about it with her all day. Last year she slept through them. I guess we’ll just have to wait until she’s two. She’ll probably enjoy them more then anyway. 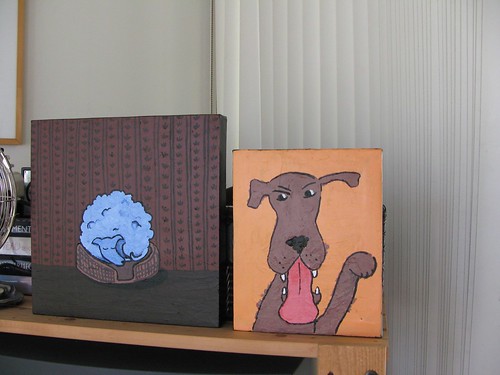 July 4th wasn’t just a bust in one way. It was also a bust in the “so-you-think-you’re-an-artist” painting department. I was soooooo proud of myself because I actually painted TWO paintings during Baby Bug’s three hour marathon nap. Three Hours! Isn’t it cool when they do that? I am loving the long naps lately. She’s really really been sleeping hard these days. I think she’s growing. I bet Toby won’t even recognize her when he gets home tonight. I bet she’s grown and inch in a week and a half. Too bad she hasn’t gained any weight. She probably wont’ be able to sit forward facing in her car seat until she’s five. Poor kid. 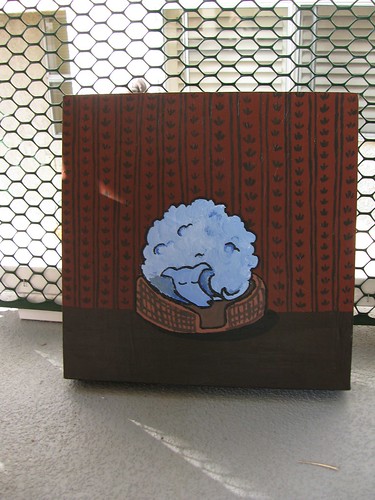 Anyway, the paintings were coming along fine until I showed them off. Nobody can figure out what this one is. Is it a puff ball? A bunch of suds? A poodle? A round rolly polly sheep? Arg. What it is, is me trying to paint over top a picture of a big huge daisy and the center of the daisy had lots of texture. A big round patch of texture right in the middle of the canvass.

See, this is what I get for trying to cut corners. I tried to sand the canvass down but I have the attention span of a gnat and apparently I didn’t sand long enough. I thought I could wing it and just paint a round scruffy dog over top. Winging it is never a good idea. Too bad too because I wing things all the time. Now I’m screwed. I really like the brown wall paper but it just isn’t working. I think I’m going to put it into the “vault” and maybe the gallery show will go crazy well that people will be clamoring for more. Then I can say… well, I do have a couple of paintings “in the vault” I can pull out. (Ha ha ha.. I’m so funny.) I don’t know. Maybe I’ll use it as a white elephant gift if I ever have a friend who is a dog groomer or owns a vet or something. 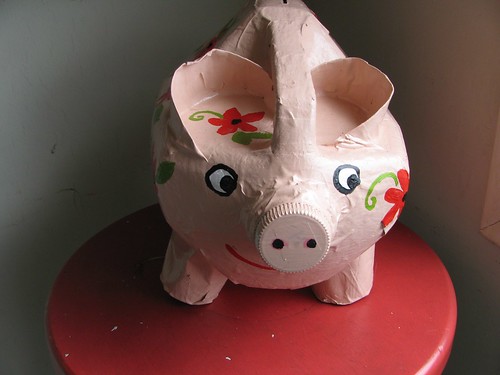 The piggy bank that my sister-in-law and her girls made for Baby Bug out of paper mache and a milk carton turned out. She made them for all the girls and then gave us each one to paint. I had fun painting it. Sometimes it’s more fun to paint when you’re not under pressure.