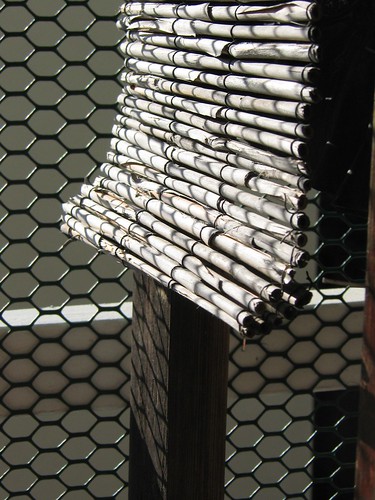 The project is this:

You know our patio…The really nice patio that we love to hang out on all during the long hot summer days? You know it. You’ve seen pictures of it. It’s really an extension of our home and when it’s hot, it’s the nicest room in the whole non-air conditioned house. Well, it’s also on the second story and has very steep sides with only a railing to stop big people from falling off. It’s incredibly scary and dangerous for Baby Bug. She could take one wrong toddler step and fall crashing below and smash her soft cantaloupe head on the cement.

Up until now our policy has been: Just keep the baby off the patio. But this is impossible in the coming summer months. She wants to be “SIDE!” (outside) all the time. And outside for us is the patio since we don’t have a yard and we live in the city right next to a major highway. It’s not like I can let her go play in the alley where cars come whizzing by without notice or dig in the next door neighbor’s flower box. Of course we can go to the beach (and we do) but sometimes I like to go outside and not have to put her in the stroller to get there. So I schemed up a grand plan to fence IN the patio and make it safe for Baby Bug to play out there. Plus, I like to be out there all the time now too and it would be nice if she could be out there with me. The play pen just wasn’t cutting it.

Fencing in the patio is no small task. It has to be just right. Firstly, because Toby is the king of aesthetics and he has a pretty strict code for what I am allowed to do and not do to our home and secondly, we rent. We don’t really want to get our landlord involved if we don’t have to. She’s given us permission to do “improvements” but her definition of “improvements” and our definition of “improvements” are not always the same. Most importantly, we don’t really want her to have to come over and inspect the improvements because no matter what we’re discussing the discussion always comes around to how cheap our rent is and how she is should raise it. We pay cheap rent and we want to keep it that way.

I thought about getting some metal dog fencing stuff and wiring it to the railings with electrical ties. That was a good idea because it can be taken down easily and won’t offend the landlord. But, when I priced it out at the pet store, it added up really quick. That fencing material is pretty expensive. I don’t really have an extra $400 laying around for this super duper home improvement project. Someone else suggested some pre-made pvc pipe fencing that you can just cut to size and ka-bamo instant pretend plastic white picket fence. But that added up pretty quick too and I was worried it would be bulky and hard to cut. I wasn’t too keen on it because even though it looks like wood, it really isn’t and I hate plastic that looks like wood but isn’t. It’s like traitor wood. 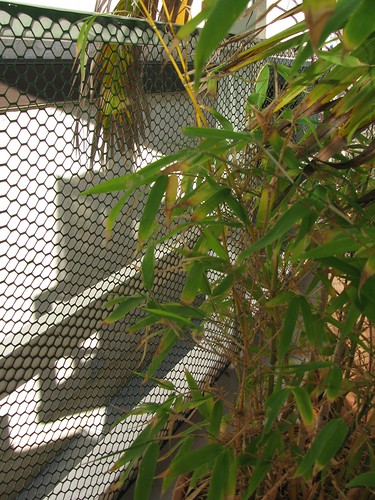 When my sister-in-law was in town, she convinced me we could do the project pretty easily ourselves with some simple but strong plastic garden fencing. I was skeptical. But she showed me how strong it was and unless Baby Bug suddenly grows beaver teeth or learns how to use wire cutters, we should be pretty safe. This stuff is thin but very very strong. We devised a plan to staple gun it to all the railings. It was a great plan.

Of course all this had to be done in secret from Toby because there is no way I’m going to be able to explain to him over the phone anything about staple-gunning plastic garden fencing onto our railings without it sounding right out of the trailer park. I was sooo stressed out about it. Wouldn’t you know it, Toby called from Hawaii WHILE we were in Home Depot and it was incredibly difficult to talk to him over the sound of the loud speaker squelching every five minutes. Then the kids got antsy and the whole phone call was just a frustrating excercise in how-to-deceive-your-spouse-badly. It was awful. Thankfully, Toby is having so much fun in Hawaii and rambling on and on about how pretty everything is, he didn’t even notice the whining kids or the squelching background noise. Phew. That was doozy. 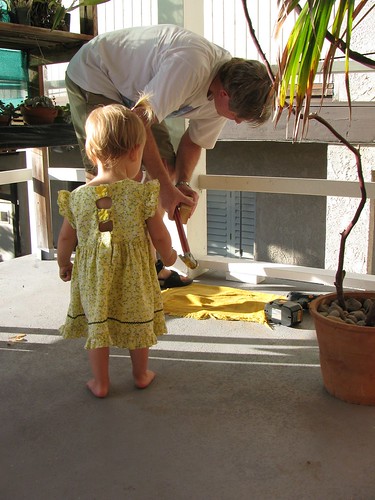 But then things got more complicated. We didn’t count on the fact that there is no railing at the bottom of our patio to staple the fencing to. The floor has metal edges and is not very staple friendly. I guess we just thought we’d pull it tight and the fencing would hold itself down at the bottom. We were wrong. We stapled up one small section and it was almost more dangerous than having no fencing at all. The gap at the bottom was like an open invitation calling all toddlers to stick their foot through it and fall to crashing down to their splattery cantaloupe death. We had to think of another plan and quick.

This meant it was time to call in the troops. It was time to do some carpentry and add a third rail at the bottom that the fencing could be stapled to. I called every handy man I could find in the phone book and every single one of them wanted $400 just to come out and look at the job. Where’s your friendly grandfatherly fix-it man when you need one? After much fretting, I finally broke down and decided I’d have to trust my brother and my dad to get the job done. It’s not that I don’t trust my dad or my brother with their carpentry skills, it’s just that the job has to be done and not half done. They aren’t really known for getting things done all the way all the time because life tends to get in the way. I also wanted to make sure it looked professional because I was very worried that Toby wouldn’t like it. In fact, I’m still worried that Toby won’t like it.

My brother and his wife are angels. They assured me and assured me that they could do the job and it would look nice. There wouldn’t be any wrong cuts or funny pieces of wood stuck here and there making it look trashy. They assured me that it really was an easy job and could easily be completed before Toby comes home on Thursday. So I went ahead and trusted them. I’ve been twitching and biting my fingernails non-stop during the whole process but guess what, they were right. They finished the job and it looks way way way way better than I imagined it would. Phew!

I was so relieved.

Until Toby called tonight. Me and my big mouth. Arg. I had to go and tell him a story about how Baby Bug dropped a rock on her foot and smashed her little toes and cried for half an hour. It was terrible. The phone call and the poor baby crying because her toes were all purple and hurting.

“What rock? How did she get a big rock to drop on her foot?”
“It was the rock that your orchid used to be growing on.”
“Where’s my orchid? What did you do with my orchid?”
“Well, it was dead. So I made an executive decision and threw it out.”
“What! You threw out my very special orchid that I was going to revive as soon as I got back from Hawaii!!!?”
“It was really really dead.”
“Which orchid. Which orchid was really really dead?”
“The one in the palm tree.”
“What did you do with the palm tree?”
“Nothing. We just sort of cleaned up the patio.”
“What was wrong with the patio?”
“Nothing. We just cleaned it. It’s a surprise.”
“What!!!!”

Things went downhill from there. Finally, after some arguing and some lose words about trailer parks and chicken coops and stink holes, we both calmed down and Toby and I decided that maybe the fencing wasn’t so horrible. Maybe it is a good thing if it makes Baby Bug happy. I assured him it did. Except the rock smashing little toes part. 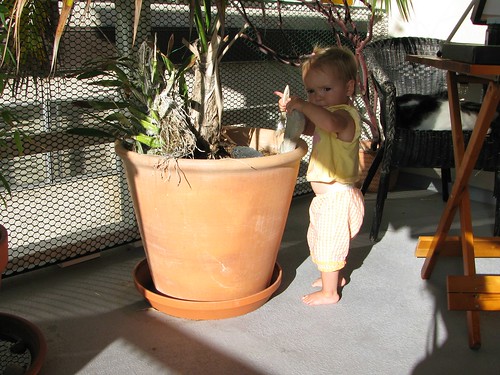 So we’ll see. He gets home on Thursday and I really really hope the plastic green fencing doesn’t look too much like animal coop material. I think it sort of blends into the background and if you squint your eyes you can almost pretend it’s not there. Right? Right? What fencing? I don’t see any fencing. Ow! I just walked right into some fencing! 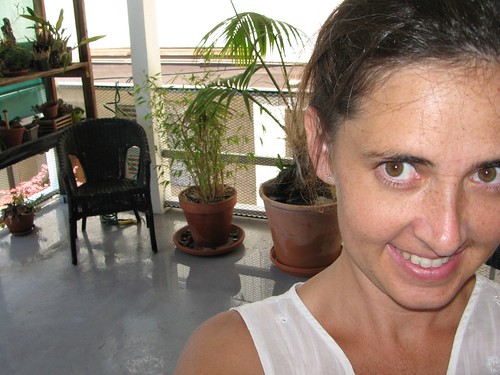 This is my “please don’t be mad at me because I did something behind your back face”. But now that I look at this picture, my face does kinda look like an evil imp face. But really really I’m not an evil imp. Maybe a little conniving. I just wanted to make the patio safe and I really really tried hard to make it nice. See food in my teeth. Not evil. 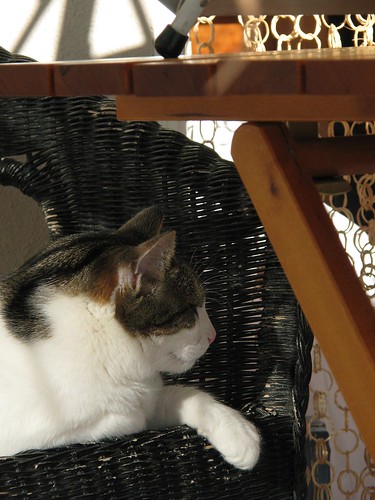 Even Pounce likes it. 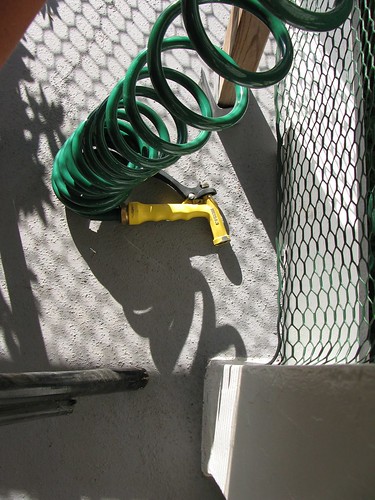 I also bought a new stretchy hose to water the orchids all the time so they will be nice and pretty and NOT dead.