posted in Family Matters, Niece-com-poops, party party, the sticks on October 7, 2006 by SAJ

I’ve been out in the sticks since Thursday because we’ve been cooking up a big surprise party for my Dad. As you might already know, my Dad is a trucker and he’s been on the road for the last ten years. We don’t see him much because he’s a long haul trucker and he traverses the whole united states from one side to the other. Sometimes he’s away from home a month at a time.

When my Dad decided to quit driving and take a job at the Fontana terminal as a safety instructor, you can imagine the impact this homecoming had on my family. We were all overjoyed. My Dad is a hard worker and we’ve benefited from his labors but we don’t get to see him much. Having a job where he can be home every night in his own bed is a huge change for the better. Especially for my mom.

So we cooked up a big welcome home surprise party. Of course I was in the thick of things, being the crazy party planning fanatic that I am. The only problem was, I have a baby now. The baby has cut down my productivity level to about 20% of what it used to be. Add to that stress factor that on the day of the actual party, my mom would spend the bulk of the day picking my Dad up from the airport (he just finished four weeks of training in Omaha Nebraska for his new teaching position) taking him to lunch and then a fake trip to the grocery store to throw him off our trail. That’s all fine and good EXCEPT my sister-in-law (my chief partner crime) had to work. She always has work.

Can I take a minute to bash Home Depot? Home Depot sucks in my book. This has nothing to do with the party but they make her work every single Sunday (even though she has it in her contract that she does not work Sunday except in emergency situations. I guess it’s an emergency every Sunday at Home Depot.) They are always understaffed. And of couse she couldn’t get the day of the party off either. So… where does that leave me? Up a creek with without a paddle when it comes to getting things ready for a big family shindig.

The nieces are not exactly helpful. They are very good kitten holders (and rope swingers) when you need them to do something for you. The kittens in my mom’s house require holding, don’t you know. Kitten holding is VERY important. You wouldn’t want the kittens to get lonely when lets say…. the tables need to be set, or you need somebody to shoo flies off the cake, or clean clothes need to be put away. Nope. Nieces are professional kitten holders. The kittens are very well taken care of when work needs to be done.

Thankfully, my brother did not let me down. In fact, in hindsight I think I will always look back on these days as fun days with my brother. I’ve always gotten along well with him and I missed him when he lived in Chicago. Hanging out with him late into the night while we made a truck cake and he manhandled the mixing of the blue food coloring drops into the store bought vanilla frosting was priceless. We stayed up very late and got very punchy. Which was necessary since we were constructing a three layer cake that crumbled and had to be held together with globs and globs and globs of disgusting gloopy toothpaste colored frosting. It was great fun.

I forgot to mention where the baby was. Her Auntie CC took her to bed with her to give me a little break. Baby Bug did not like that. She is such a Mama’s girl these days. She cried herself to sleep and flailed madly and poked her Auntie in the eye. But in the end she fell asleep.

The next day I accomplished pretty much nothing. Thankfully, my Aunt Jailgy came over and skewered all the meat (for shishkabobs) and brought the entropy level down a notch with her wonderful habit of cleaning and organizing everything in sight. Rapunzel took a break from kitten holding and made deviled eggs all by herself. She also iced my cupcakes for me with blue frosting. Then we were off to the party store for some balloons and streamers. You see when you’re related to me, you go all out. That’s just how we do things.

Would you ever guess that getting balloons could be traumatizing? Well it was. As soon as Rapunzel and I walked into the party store we were greeted by popping balloons. The girl behind the counter said it was because the balloons were from a customer who brought them in and they were cheap. Okay, fine. We’ll buy the expensive balloons. Well, it wasn’t because the balloons were cheap. Before we even left the store, two of our ten balloons popped. One of them popped right on Rapunzel’s head and apparently it hurt.

Maybe it was the air today. Maybe it was the weakness of the balloons. Maybe it was the temperature difference between the helium in the tank and the air in the party store. Whatever it was it caused a storm of balloon popping. Rapunzel did not like it. Another one popped in her face as she climbed into the back seat of my car. By then she was in tears. The scary balloons were attacking her! She crouched on the floor behind the driver’s seat, crying her eyes out.

How could I be such a horrible Auntie and force her to ride in the car with the attack balloons?!! I was this close to just walking back into the store and getting my money back. But I decided Rapunzel could tough it out and we’d just cut our losses. Thankfully, no more balloons popped and somehow we made it home without a single explosion. Which is surprising because Baby Bug thought the ribbon was for chewing and she batted at the balloons like they were toys.

It was all worth it. My Dad was completely and utterly surprised. It’s easy to trick my Dad though. He’s so gullible. Even so, my mom played him like a violin. She told him she didn’t want to go home right away because she wanted to look at new mobile homes. Then they had a nice leisurely lunch and on the way home she even called me from the other side of town to “see what she should pick up at the store for dinner”. While I rattled on about what was going down at Camp Chaos in preparation of the big party on my end, she rattled back to me that “she’d be happy to pick up hamburger for meat loaf and maybe some lettuce for salad” for my Dad’s over-hearing benefit.

Meatloaf! Yeah right. Since when do we make a special trip to the store to make meat loaf? My Dad was so snowed. He was probably salivating over the fictional meat loaf the whole way home. Even when they drove down the street and he saw all the cars parked in front of my mom’s house, he didn’t have a clue. He told me he thought someone in the neighborhood was having a party and he was actually a little annoyed that he’d probably have to put up with some loud music when he wanted to go to bed early. I love my poor old tired gullible Dad. He still didn’t get to go to bed early.

We got him good. It was a pretty fun party too. Lots of food as usual and the guests braved the evening cold for some hymn singing and truck cake and ice cream for desert. All in all, I’d say it was a great time. 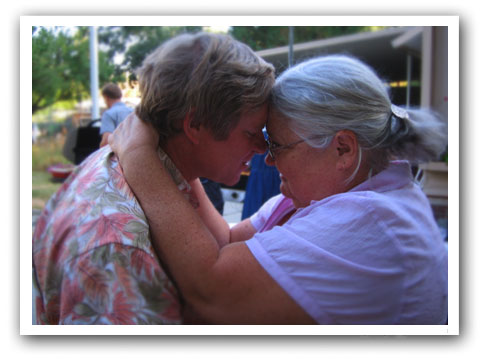 But most of all, it’s just great to have my Dad back home again.