Forgive me for the typos… I’m just gonna jot something down quickly so as not to keep you in suspense. What would I do without you internet! You are like my own personal cheering crowd. Thank you.

I went to the ultrasound. The technician didn’t say she found anything. I didn’t press her though. She seemed very efficient in her job and reading the pictures she takes is not her job. She told me my doctor would contact me in 3-5 days. THREE to FIVE DAYS!!! Well. I don’t think so.

I’m going to call my doctor this afternoon, if she doesn’t call me first. Right now they are on their lunch break so I can’t pester them too much. And man is my doctor busy! The office only has two examining rooms. It’s just a cracker box of a doctor’s office and there were about twenty people in the waiting room!!! I had to wait to see her for over a half an hour yesterday. No worries. I could hear her in the next room talking to an overweight man about losing weight. She’s very kind and thorough so I don’t mind waiting because she spends just as much time with me. I love her.

I’m thinking since the ultrasound technician didn’t exclaim something like “Wow! Look at that tumor the size of a grapefruit!” or “Your gallbladder looks like it’s being attacked by asteroids!” that I don’t have anything wrong with my gallbladder, my spleen or my liver. I think those are all the things she checked. It was tricky deciphering the code on the monitor. “RK Liver” means what? Anyway. I think the ultrasound proved nothing. Which is good but a bummer, ’cause I just want to know what’s wrong with me already!!!

When I got home I was near faint from hunger so I was brave and made myself a bowl of oatmeal. Guess what! The oatmeal has stayed down! So far so good. It might be too soon to say though. It was 11 when I ate it. It’s 1:45 now. No major pain. Just burning and some achiness in my back that I can almost ignore. I’m even thinking I might have enough strength to go to the store since we are seriously out of groceries. Baby’s gotta have diapers too.

At 2 I’m calling my doctor and I HOPE she’s not too busy to give me some news.

Edited to add: at 2pm left msg with dr. I guess no news is good news. 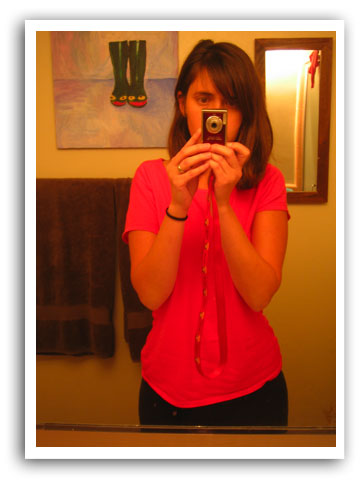 I have to admit I’m scared. I can see my bones popping out in the mirror. I like being skinny but I feel like the character in Thinner who just keeps getting skinnier and skinnier after a gypsy curses him. I’ve already lost 12 pounds in just one week and two days. It’s not right. Starvation diets never work. You always gain it back and then some.

I don’t even care about that though. I’m just scared I’m going to keep losing and losing and then I’ll start blacking out and then what? I’m just plain scared. I’m not ready to be admitted to the hospital yet. There are so many bad habits I have to train out of the baby before I let someone else take care of her full time. No nanny or babysitter will wake up with her four and five times a night just to sit with her and attempt to nurse with boobs that have no milk. She won’t take a bottle. She hates formula. No nanny is going to understand her silly pacifier ritual we go through. I haven’t written down all the important things on the grocery list like what size diaper she wears and that she doesn’t like any store bought baby food that has potatoes or peas in it.

Maybe it’s just the odd hour. Maybe it’s that I’m up at five am and it’s dark and the long fingers of nightmare-land still grip my brain. I dreamt all night long that a small dog (a min pin to be exact) was trying to shoot me with a gun. I also dreamt about loved ones dying and planning parties that got all screwed up because everyone came on the wrong day. The things that scare me…

I guess I’m scared because at my doctor’s visit yesterday she dropped the “C” word. She said there was no reason to even be afraid of getting stomach cancer but that I did have some H. pylori bacteria show up on my blood test and it would be a good idea to get rid of it because in some cases it does lead to stomach cancer. But all I heard was CANCER. Am I’m dying of stomach cancer?!!! I was just kidding before!

It’s most likely an ulcer or gallbladder stones or even still a rogue virus. She said it’s not food poisoning because usually the vomiting only lasts for two to three days. I’ve been vomiting for a week and two days. I finally figured out how to stop throwing up: stop eating. No food=no puke. Sounds like a plan. Except I can feel myself getting weaker and weaker and weaker. I can’t go on like this much longer.

And that is why my doctor moved my abdominal ultrasound up to 9am this morning. I just have to hang in there for four more hours and hopefully there will be some answers and some medication that won’t harm the baby through breast feeding. Hopefully things will get better.

But hey, look on the bright side! Only twelve more pounds and I’ll be down to what I weighed in high school! This ain’t no sinusitus anymore.