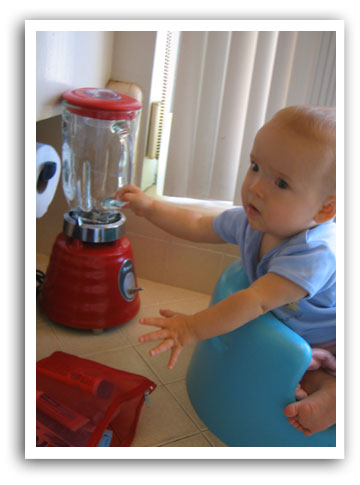 What? Doesn’t everybody play with the blender when they’re done brushing their teeth?

Yeah, us neither. It’s just that the bathroom sink is clogged, waiting for Toby the Super Dad to fix it with the magic poison stuff. So we are using the kitchen sink to stay fresh and clean.

And what goes down must come up!

For a day I asked for no advice I sure got a lot of good advice. Right now Baby Bug is sitting in her exersaucer watching Sesame Street and eating cheerios. Imagine that! Before yesterday I would have been feeling guilty about just plopping her in front of the television. Before yesterday she never seemed that interested in watching Elmo. I tried to watch Sesame Street with her before but she was much more interested in crawling all over the couch and pulling the cat’s tail. Maybe being contained in her circular baby jail makes Elmo more appealing. Either way, she’s not complaining and I have a minute to punch out a quick blog post to tell you all thank you for your help. I’m also looking over at her and smiling and telling her that I’ll be “done in just two minutes.” Which I will.

And after that I will feed the baby her breakfast and then take a look at my MASTER CHORE LIST on my fridge! It’s so cool. I’m soooooo organized! It’s funny how just organizing the hamster wheel of chores makes me feel better already and I haven’t even got anything done.

So thank you internet. One of these days (when she’s like 18) I’ll get to go and read all your blogs and make nice comments to you!

I also wanted to post some pretty pictures of the beach because we had a very nice day yesterday. That’s the good thing about bad days, they are usually followed by really good days.

Guess what!!!! She got a tooth! This morning at about 8 something I let her drink some water from my water glass. As she was drinking I heard this, “clink, clink, clink” and I knew it was something other than gums sucking on my water glass. SHE HAS A TOOTH! So maybe that has something to do with why the day before yesterday was so difficult. Maybe she was extra grumpy and needy and maybe she wouldn’t take a nap because her tooth kept waking her up! Anyway, she’s happy now. She won’t let me see her tooth but I did feel it with my finger and it felt sharp and jaggedy.

So how many more of these things is she gonna get?