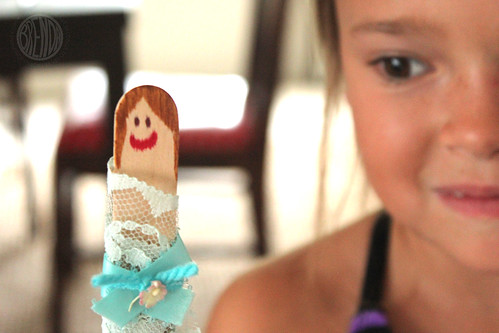 It all started because we read this library book. At the back there’s a little story about Riley, the Groundhog, giving his friend, Rose the vole, some worry dolls made out of toothpicks. I didn’t think much of it because I’ve never really been a fan of prayer dolls. I think they are cute and I have a few somewhere but I figured why pray to inanimate objects when you can pray to God.

But something about the story clicked for Bug. I think mostly because she struggles with “her worries” and she’s always trying to get them under control. She’ll often tell me she has to sit and cry it out “to get her worries out.” My heart breaks for her when this happens. So often I just don’t know how to comfort her. Her emotions are like a train going full speed and no matter how much you want her to hurry up and feel better, you just have to let them run their course. It’s exhausting. 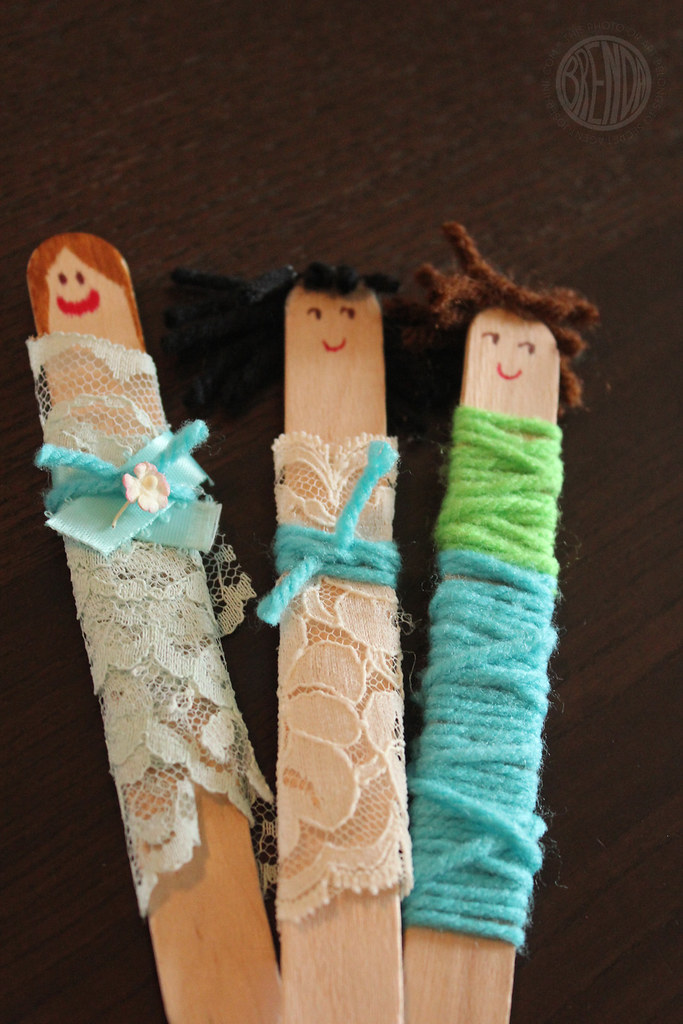 After we read this story Bug immediately wanted to make some worry dolls. I didn’t have any flat-ended toothpicks but I did have a lot of popsicle sticks leftover from some other craft I had done some long time ago. (Yes, I have boxes and boxes of craft supplies. It’s a sickness.) I got out my stash of yarn, ribbons and lace and let her use my sharpies to draw in the eyeballs. I made a couple of dolls from bits of lace and next thing I knew Bug was completely absorbed in this craft. 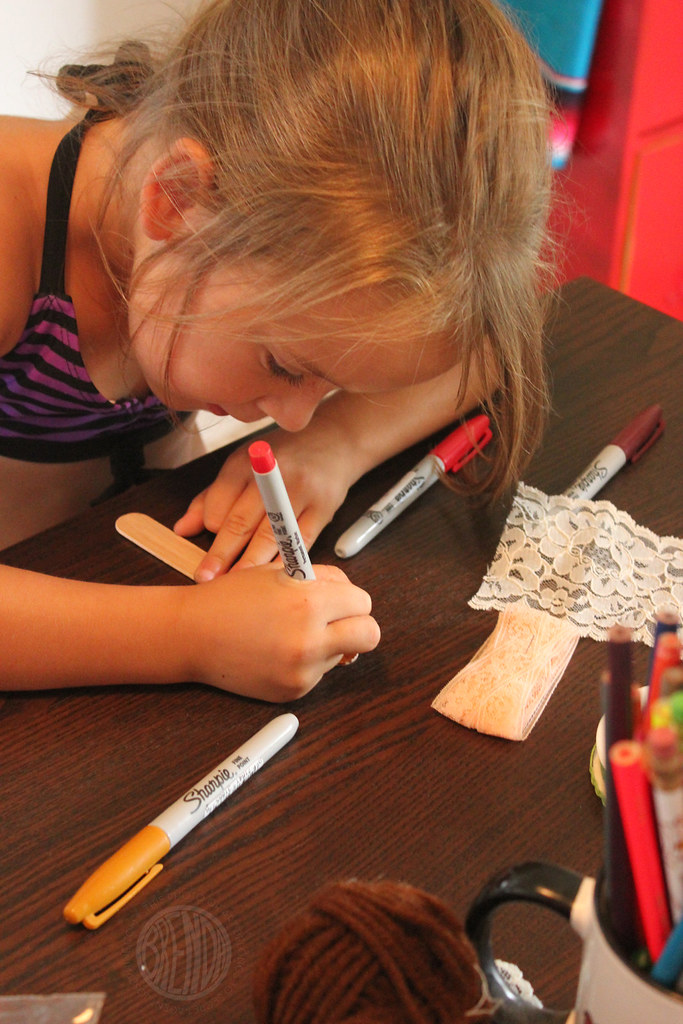 I know it seems like we craft all the time on this blog and everything is rosy and fun but the truth is: often Bug doesn’t like to craft with me. She’ll fool around for a few minutes and make one thing or another but I’m often by myself making prototypes and photographing steps while she’s playing cat in the closet with Pink Kitty. So when she wanted to make worry doll after worry doll I stepped back. I didn’t want to break the spell. 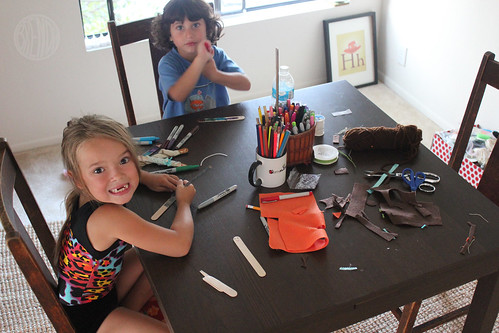 Then the neighborhood kids came over and they wanted to make some too. I wasn’t going to say no. 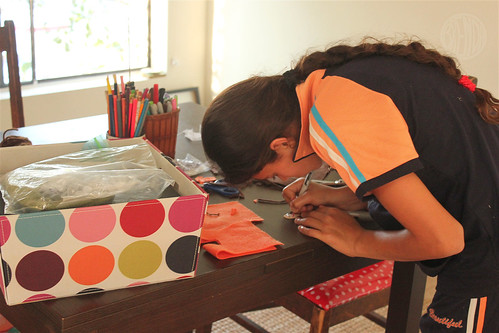 They made more and more… 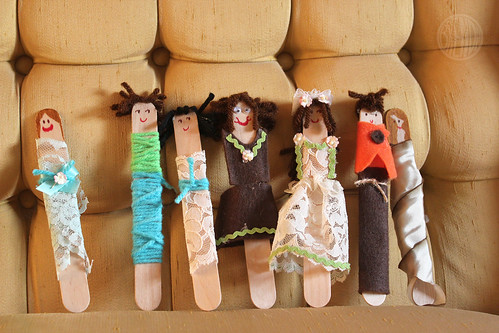 and more and more… 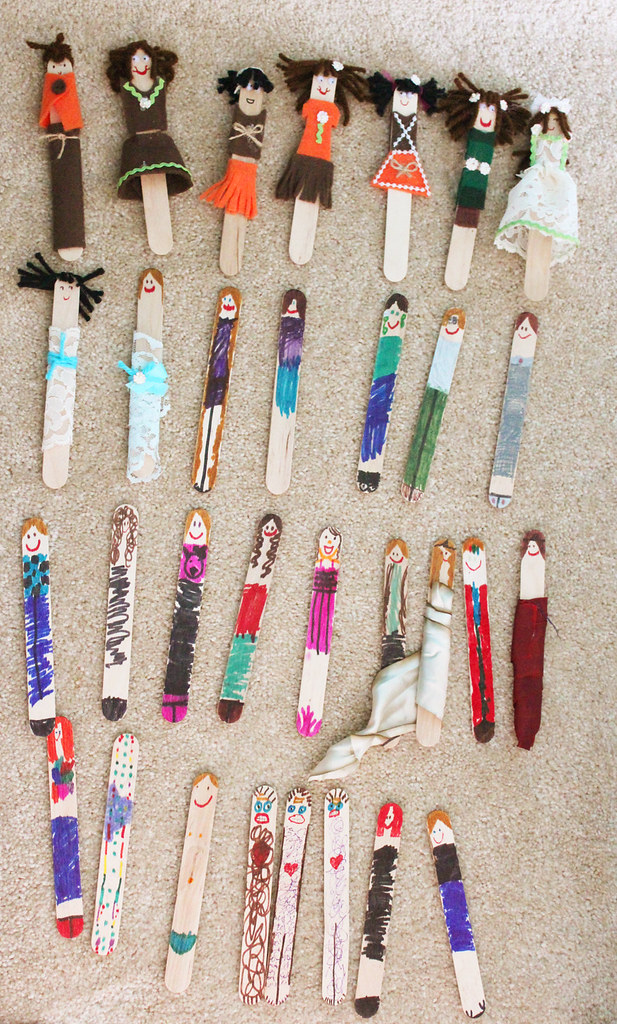 It was like a Worry Doll factory in my house. Who knew kids could be so focused and productive?!! 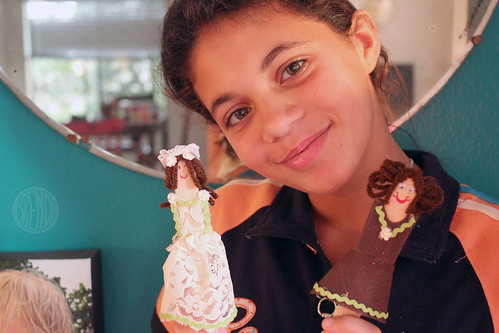 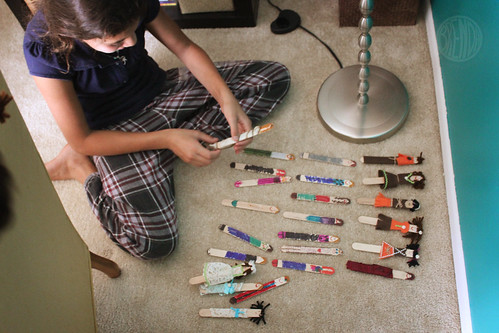 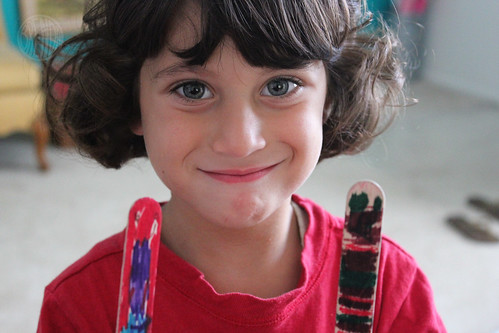 These silly dolls kept them occupied for two days straight. I’m not even kidding. It was awesome. I got so much done. They probably would have made more but I had to put my foot down and take back my house at one point. There were bits of felt and lace and ribbon everywhere and glue guns getting glue on the carpet, it was getting a little out of control. But I did send the neighborhood girl home with an old glue gun I don’t want any more and a baggy full of supplies so who knows, maybe she’ll keep the craft alive even longer. 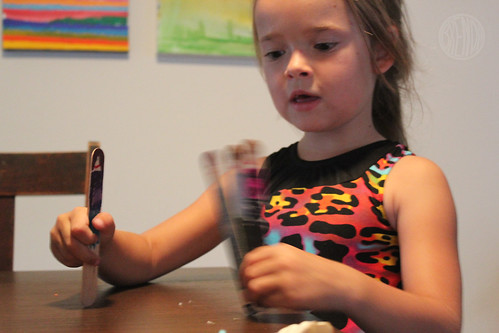 Since I shut down the factory they now play with them which is also very sweet. They make great puppets. In fact, I think Bug has made a doll for every person in her life that she cares about and now she puts on little one-act plays with them. It’s been kind of interesting to listen to her act out scenarios with her dolls. You get a glimpse into what is really going on in her head. Sadly, a lot of her little one-acts are about how much she misses her old friends in the sticks. 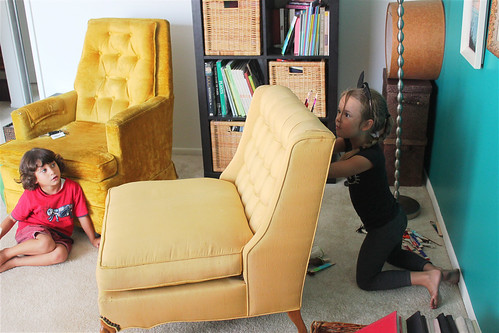 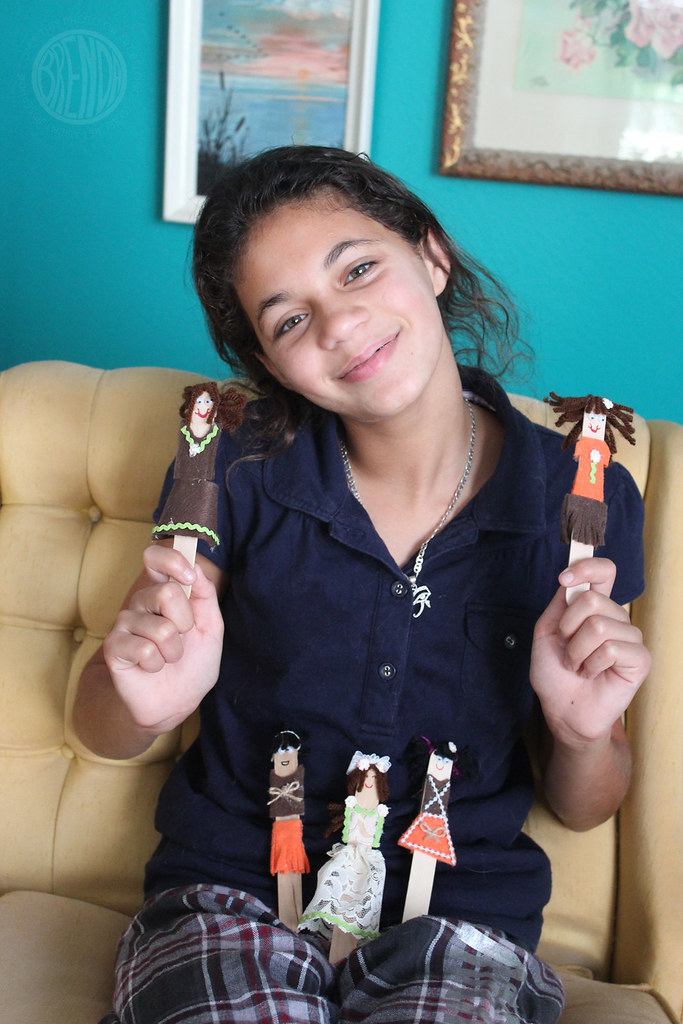 This brother and sister are here from Iraq. I don’t know their whole story but I do know they’ve only been in America for six months. They speak English remarkably well considering how short they’ve been here but we have funny little glitches in communication, naturally. The little three-year-old boy often asks me for “Oxyclean” when he wants ice cream. It’s so cute. Of course I’ve done my best to explain that Oxyclean is not for eating but he still asks for it anyway. 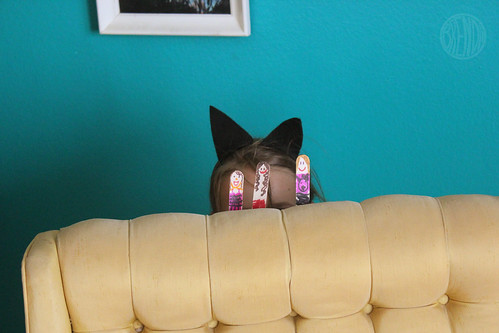 So that’s my story! Need to make friends in the neighborhood? Need to work out some worries? I couldn’t recommend this craft enough. 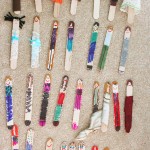