posted in do me a favor, my books, SAJ's Stealthy Book Tour, Shop Talk, stealth club on January 4, 2012 by SAJ 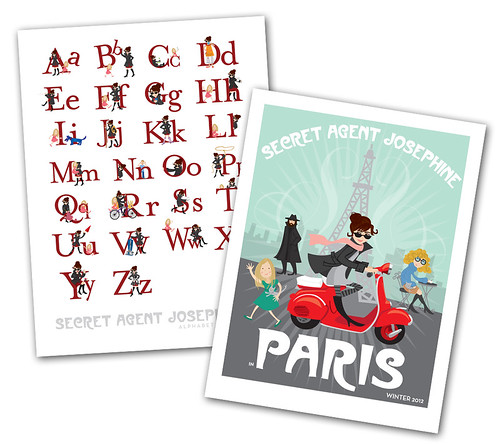 Okay guys, I finally finished the official SAJ posters. In fact, I designed two of them which is not really a good thing because I only want to print one version. But the Paris version was dying to get out of my head, so I let it out. If I don’t print it, it’s not a loss. It will show up somewhere…maybe a book cover? I don’t know yet. Before I go to press though I wanted to ask your opinions. Which poster do you like better? Which one would you actually hang up? I mean, if you were into that sort of thing of course.

And if you were hunting for the sentences and emailed me, Yay! You get to have one of these. However, as of right now, I will no longer be accepting emailed sentence lists. Thank you everyone who played along. I knew you were a fun stealthy bunch.

Here are the secret spy sentences for your proofing pleasure. I think everyone got them all right so no worries there. If you emailed me, you’re in. Free posters all around!

a. It’s a cold day for pontooning.
b. The spotted cuckoo is flying backwards.
c. The moles snuck into the garden last night.
d. The black dog walks in the noon-day sun.
e. The chimera has three sets of teeth.
f. The blue lake freezes in winter.
g. The green tea brews in tranquility.
h. The polar bear collects spare change.
i. The cheese stands alone.
j. Your sedated mouse is in need of a companion.
k. The rain in Spain falls mainly on the plain.
l. The last swallow of summer is winging his way over the horizon.
m. Silence is of the Gods…only monkeys chatter.
n. The dolphins are in the jacuzzi.
o. Do you want a shipment of chocolate?
p. Surely the caged whale knows nothing of the mighty depths.
q. Tell the man standing on the corner that the oyster owns a fine wristwatch.
r. The best chestnuts are to be found on Pigalle Square.
s. The pheasant has no agenda.
t. We need to send in The Urbanator.
u. The eagle flies at noon.
v. The green parrots have migrated to the south.
w. My postillion has been struck by lightning.
x. When the dogs away that’s when the cats play.
y. In London, April’s a Spring month.
z. Guys, I know Kung Fu.