posted in Bug, half assed posts, place holder posts on June 1, 2009 by SAJ 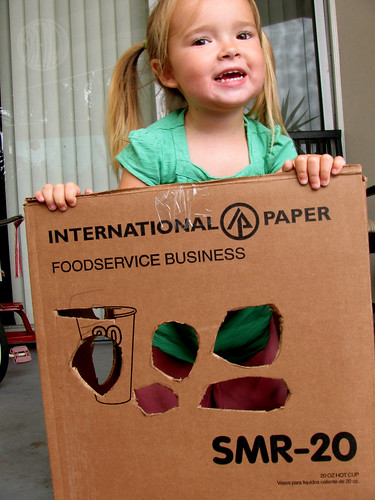 I was talking to Bethany today about what a crappy blogger I’ve become recently. My biggest excuse is that my peak creative time does not align with Bug’s nap schedule anymore. This is very true. But it doesn’t help that I’ve discovered that I can watch television online when Bug is asleep. (Where have I been? 1993?) My productivity has taken a steep decline since I became hooked on Mad Men. Groan.

So I’m prying myself awake with a cup of java and hammering out a listy post. You guys like those, right? What’s been up around here? I started a meme called 101 Quirky Things My Kid Does but I’ve only gotten to about ten. So much for that idea.

Here they are so far:

Those of you who know Bug will be totally bored by this list because it’s so old news. 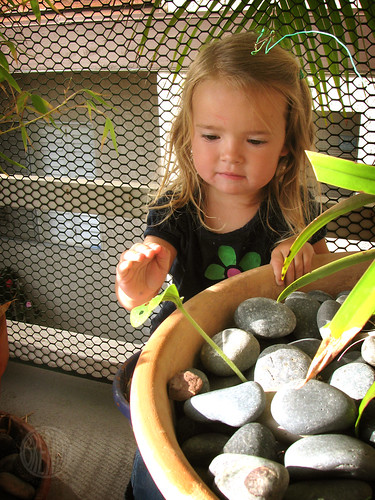 In other news we have a pumpkin growing on our porch! A real pumpkin!…I think. It could be a watermelon. It’s growing in a big pot with our struggling palm tree and even-more-struggling orchid. I just looked over one day and there was this giant sprout growing out of the rocks. It didn’t look like a weed, it looked like a squash leaf or something. So I pulled back a couple of rocks and lo and behold there were some big flat pumpkin seed looking things. So I’m almost convinced that somehow last year when we were carving pumpkins some stray seeds crawled over there and planted themselves.

I’m very happy about this development. I never ever remember to plant a pumpkin and every year about October I kick myself because how easy would it be to plant a pumpkin? So this year it planted itself! Bug and I are watching our little (but actually pretty big) sprout very carefully. I can’t wait until it winds itself around our porch and produces a big fat baby pumpkin. If it makes it. If it dies I think I will cry.

And that’s all she wrote.