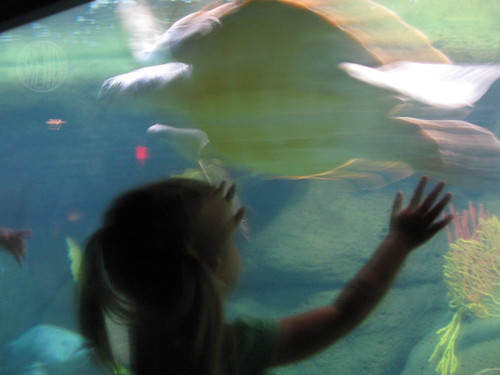 Toby came down to visit us while we are house-sitting and took us to Sea World on Friday. Isn’t that cool how that worked out? It’s Father’s Day weekend* and he takes us out? We did make him dinner the night before and breakfast the next morning so maybe that counts for something. I think he just missed us.

A while back (probably right after I took Bug to Disneyland when she was barely a year old) Toby and I decided together (though I took quite a bit of convincing before I agreed) that we would hold off taking Bug to all the major amusement parks around here until she was older and could appreciate them more.

This was a bit hard for me to accept at first because how could I deprive my kid of all the local fun? And what better way to spend some long boring summer days than hopping off to Disneyland in the afternoon with a year pass? Year passes are great because you come and go as you please and you don’t have to feel like you have to cram everything into one day.

But Toby didn’t agree. He wanted to be with Bug on her first trip to Disneyland and Sea World and the Zoo etc… If we got a year pass and spent every odd Thursday afternoon there, the novelty would wear off and Toby would miss out because he has to work every odd Thursday (and every other day too) in order to provide for us and this freedom I have to be bored with my kid. 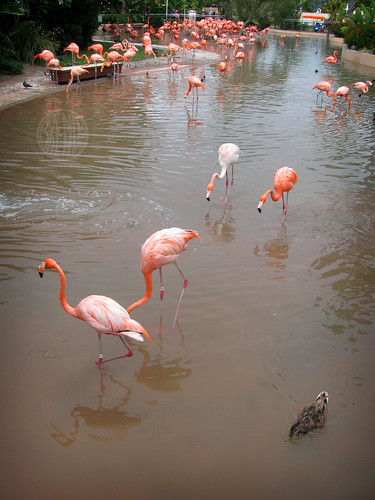 It turns out that Toby is right afterall. Not on the part that having a year pass to amusement parks would save my sanity but the part where Bug appreciates going more. She really does understand the concept of looking forward to something. When her cousins talk about their summer plans to go to Disneyland, she isn’t crying about how she is left out. Instead, she is bragging loudly that she gets to go to Disneyland when she is FIVE with her Daddy—as if she’s in some sort of exclusive Daddy’s Girl club.

You can imagine how glad I was when Toby softened on his wait-until-she-is-five rule when it came to Sea World this Friday. Bug might have all the patience in the world but I sure don’t. And what do you know, Bug loved Sea World. But really, I think she just loved having special time with her Dad. It was a charmed day.

I can say that now in hind sight but when our day started, I was worried it wasn’t going to turn out so well. We arrived late and stood in a terribly long line to get into the park. Then when we got in the park, we immediately had to stand in another very long line to see the Shamu show. We were worried the whole day was going to be long lines.

I guess things have changed since I was there last in nineteen eighty-something. There are lines for everything now, not unlike security at the airport. But fortunately when the show began, we filed in quickly enough so it wasn’t too terrible. But then there was the waiting for the show to start and they played all these silly movies about growing up to be a whale trainer. Bug was bored. It was looking bad. 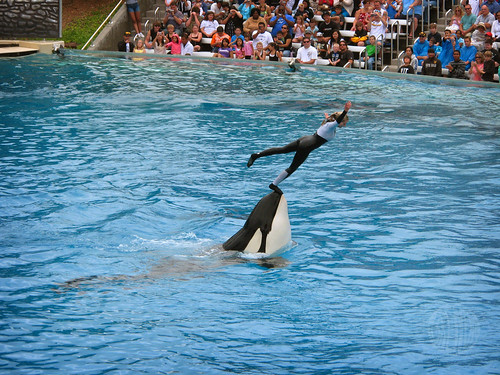 THEN the whales started jumping and big splashes lopped over the sides of the tank and all was saved! Three year olds are definitely old enough to appreciate big whale splashes. It was all very exciting. 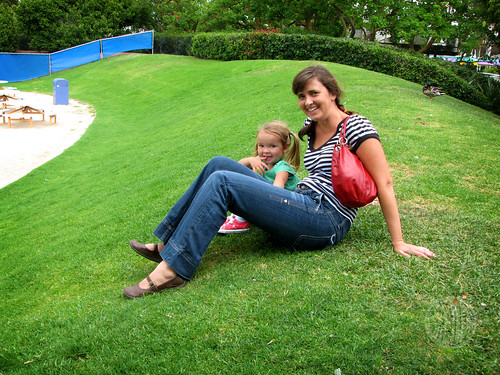 After that we wandered around, looked at the exhibits and ate our contraband lunch. Did you know you aren’t allowed to pack a lunch and picnic anymore? Everything is so different since I went to Sea World as a kid. I guess I’m getting old or something. We did picnic anyway since the very nice security guy checking our bags looked the other way. Who knows, maybe amusement park food is tasty nowadays but I had packed salami and cheese and didn’t want to waste it. 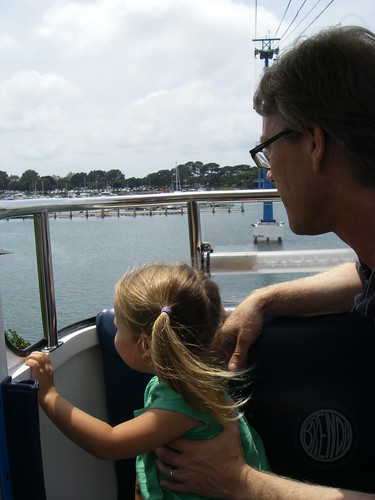 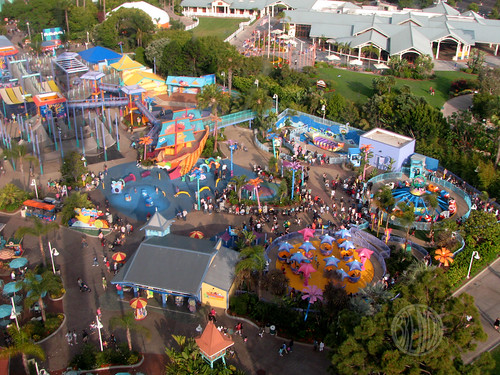 We caught some more shows, rode on the sky ride and let Bug have a good long play in the fun zone which I DO remember quite fondly from when I was a kid. Unfortunately, Bug was too short to ride on any of the rides (%$@#! short genes) and that was a big bummer. I think we are going to have to make a line on the wall at home at 42 inches and just not ever go to any more amusement parks until she’s that tall. 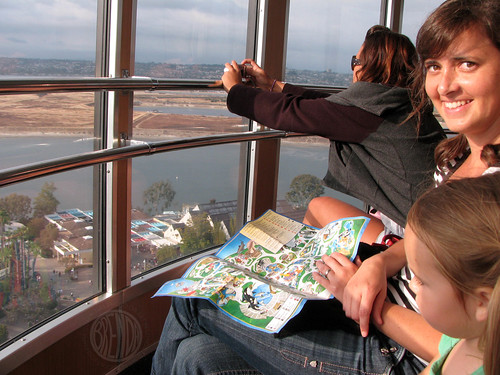 That was pretty much our day. Outside of a few arguments between Toby and I over which way we should go and which shows we should see, everything was really fun. Not crazy fun but a good day.

Then, just before we were about to leave, we were summoned by some employees to hurry and get into the Dolphin show before they closed the gates. We squeezed in right before the locked everyone in. It was the best timing! We should have tried to be late to all the shows. We got a great seat (outside of the soak zone) seconds before the show started which meant NO waiting and LOTS of splashing. 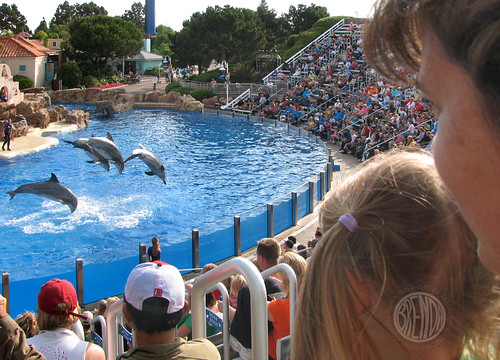 Bug LOVED the dolphins. She was enthralled. I can see now why they had all those movies before the Shamu show about little kids growing up to be whale and dolphin trainers. I can see how such a spark could be ignited. I don’t know if Bug has a scientific bent but she does love animals and she definitely loves to entertain. Who knows. We can always dream. 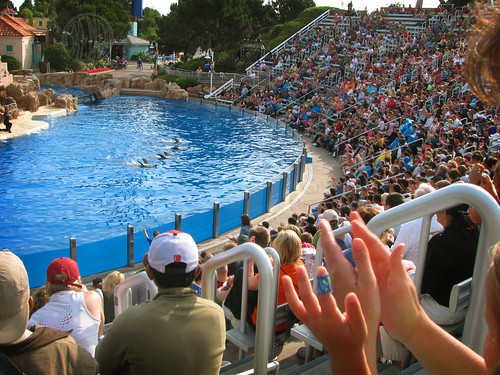 It was the perfect ending to the day. We walked out of the park hungry and tired but not at all grumpy. I was really surprised that Bug lasted the entire day without a single melt down and she didn’t even have a nap. Maybe she’s out-growing naps or maybe she just really enjoyed her special day with Toby. I know I did. 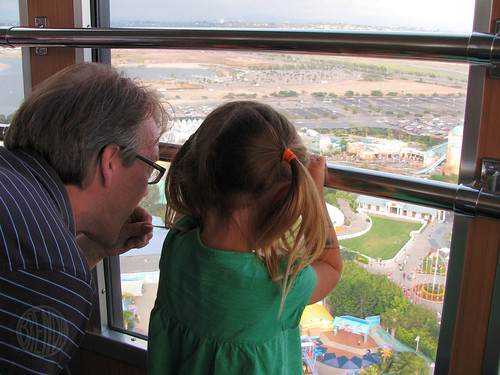 *Doh! When I wrote this I thought it was father’s day weekend! But it’s not until next weekend. Which is really good because I was running behind in mailing out my toolboxes to the Grandpas! Woot! I get another week to remember!