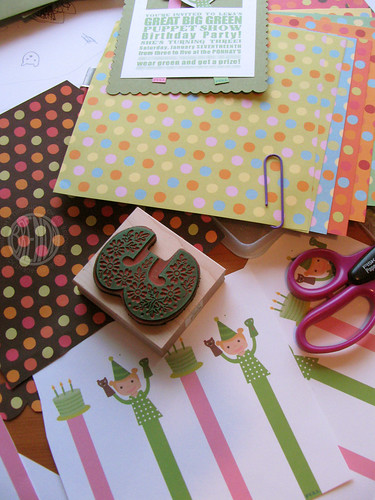 Without a further thought to my disgusting carpet and the possibility that my house might be too small to fit thirty-some people, I am pressing onwards with a great big green puppet show birthday party. I’m SO EXCITED!!! I didn’t plan a big birthday bash last year and though it was sweet, I sort of missed it…I live for this sort of stuff. 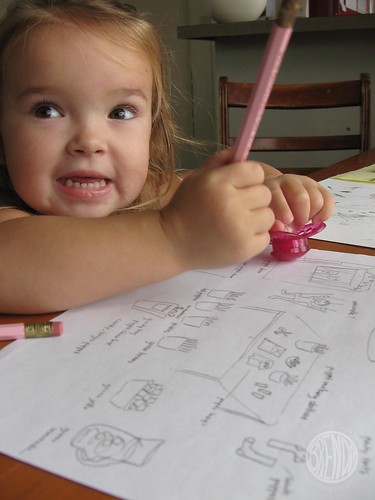 Good thing I birthed a child who seems to be into the hoopla as much as I am. I don’t know what I would do if Bug was the anti-social sort. We’ve been scheming for days. Besides the fact that she thinks every day is her birthday and cries when I can’t magically produce green birthday cake on command, it’s been a lot of fun having her in on the plans. 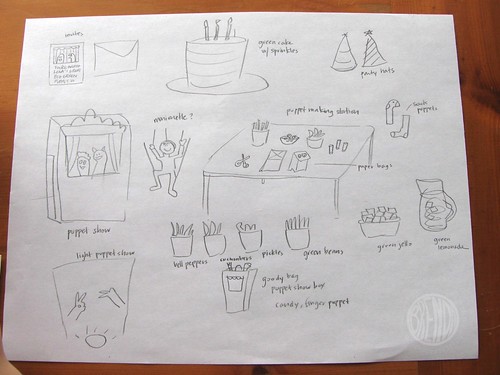 So far we’ve worked out the food: everything green. The cake: made by Bethany. The Puppet Shows (finger puppets, a big box theatre and a light shadow theatre) and of course a make-your-own-puppet craft table. I think it will be great fun. My only worry is I’m not going to hire anybody to put on a puppet show so that means I need to either recruit my ten-year-old niece or put it on myself. Or both. I will probably suffer from some stage fright but I know I can do it since I used to do this all the time as a kid. I was the queen of puppet shows. But thirty-some people who are not my doting aunts and uncles?…. eeeeeeee! 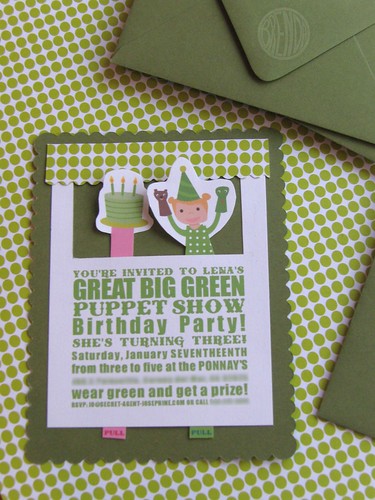 The invitations are done and mailed so there’s no going back now! We can’t have a puppet show birthday party without a puppet show. Unless there’s somebody out there in internet land who can pull off a puppet show like the ones they have in the Jardin du Luxembourg I think it’s going to be me.

The invitation turned out really cool. You can pull the little tabs at the bottom to make the Bug puppet and the cake puppet bob up and down. I know it will last about five seconds in a child’s hands but it was worth it for the fun. I love making things with paper. 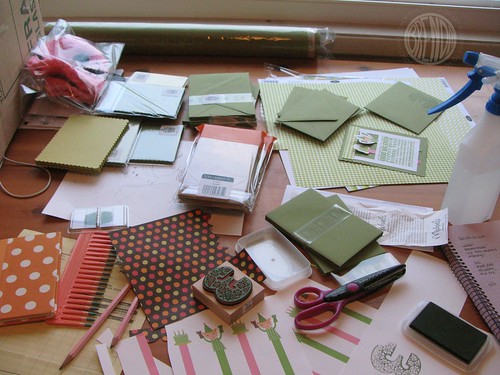 Which leads me to my other problem. I need to stay away from this store!!!! I want to buy everything in it. They are a very handy source for envelopes but I have a very hard time walking by the wall of paper without sampling. Some people have problems collecting fabric. I have problems collecting paper. But that’s okay. I’ll use it someday. I just need to find a place to keep it all organized. I feel a purge coming on.

(Oh lovely. I just noticed I spelled seventeenth wrong on the invitations that are already in the mail. Oh well. It keeps me humble. I’m keepin’ it real.)