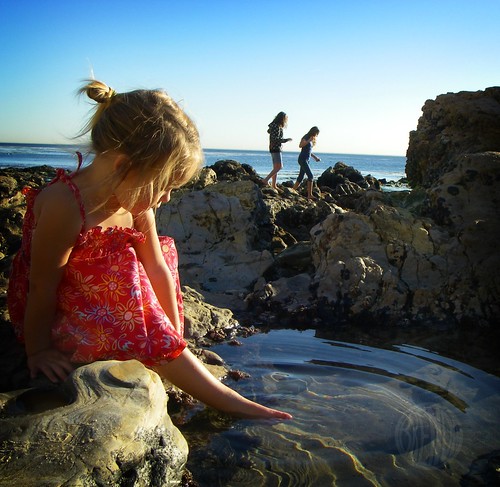 Yesterday was Bug’s second day of preschool. She only goes on Mondays. Over the past week we talked about how much she did not like preschool and I pretty much gathered that she actually really liked preschool. She just didn’t like going there without me. All week she sang little songs and talked about how we should do exercises “like this” and then she would wave her hands around in the air. I figured it can’t be that bad if they are teaching her fun songs and exercises. It’s not like she’s stuck in a corner, ignored.

So when Monday rolled around again we decided to give it another shot. Bug even seemed excited about going. She was definitely excited about going back to the playground. She wanted me to take her to the playground only and skip the “inside preschool” but I explained preschool doesn’t work like that. She seemed okay with it. She only screams and pitches a fit when she thinks I’m on the fence. If she can tell I’ve made up my mind about something she usually just sucks up her quivering bottom lip and makes the best of it.

And that was that. She was fine all the way up until the very last moment when I handed her over to her teacher. Her teacher told me she likes to be held and part of me wondered if it was Bug wanting to be held or if it was the teacher liking to hold Bug. Either way, I’m fine with it.

Bug willingly went to the teacher but I could see her big eyes welling up with tears and her bottom lip quivering. She didn’t cry. She just gave me that look that makes me want to give up everything and hold her like a baby for the rest of her life. Except she gives me that same look when I won’t let her eat cookies for breakfast, so I’m not completely disarmed by it. It was still hard though.

Thankfully a friend of mine also has her little boy in the class and she asked the teacher about Bug. Apparently Bug only cried a little bit but she did want to be held and ended up taking a little nap on the teacher’s shoulder.

I’m really confused by this. We do wake up at the crack of dawn (5:45am is not unusual) and I do know that Bug gets tired around ten or eleven. But we usually have no trouble pushing through until lunch and then taking a nap at one or two. In fact, I can’t get Bug to take a nap at eleven if I want to. If we take a drive anywhere at that time she’s out like a light but at home she’s squirrelly and won’t lie down and be quiet at all.

The only way I can guarantee that Bug will sleep is if I deprive her of anything interesting. She has to be completely bored before she will drop off. A darkened room with no access to her toys is the best way to get her to sleep. So why does she feel like sleeping when she is at school? I would think with all those other kids around, sleeping would be the last thing she’d want to do.

I can see her pretending to sleep. She does that all the time. She loves making up her perfect bed with her perfect pillow and snuggling down with a teddy bear and telling us all to be quiet because she’s “sleeping.” But actually sleeping?!! That’s for the birds. Why would she sleep on the teacher’s shoulder? I’m totally baffled. If she did sleep, I suspect it wouldn’t be for very long. They are doing activities and there are other kids being loud. It’s not like she could pass out for hours is it?

So tell me this: when we got home and it WAS nap time, why then would she NOT sleep at all? Isn’t she supposed to be tired and worn out from all the fun she is having at school? No dice. I was so frustrated yesterday. We lay down together for an hour and she wasn’t having any of it. She was bouncing around like a hyper kid doing everything but falling asleep. She’d rather contort her body in fifty directions than actually settle down and rest. Finally I just gave up.

Could it be that she’s giving up naps altogether? We were just in the sticks this last weekend and I didn’t make her take a nap there because her cousins were at my mom’s house and that’s just cruel to make her take a nap while she can hear them laughing and having fun down the hall. Of course she was a crankmeister by the time five o’ clock rolled around but them’s the breaks of skipping naptime. We hardly ever skip naptime at home but we always do when we are out visiting friends and relatives.

I guess I’ll know the answer today when naptime rolls around again and there aren’t any preschool snoozes to mess with our schedule.

Since naptime was in the can I decided to let Bug have her day. It’s not like I can complain about not getting my “me” time since I spent three and a half hours at Starbucks that morning getting some freelance work done. I might have been slightly annoyed because I had more things I wanted to do without the help of a toddler, but I am a mom after all. I did sign up for this job willingly. So we decided to go to the beach!

The weather has been beautiful. Freakishly beautiful. The Santa Ana winds have kicked up and the air has been dry as a bone. It’s been so hot I had to break out my summer sundresses again. Part of me really wants it to be winter for a change but I guess I can’t complain. Tough life when you have to go down to the beach and run around in the icy water because your apartment is too hot IN JANUARY. 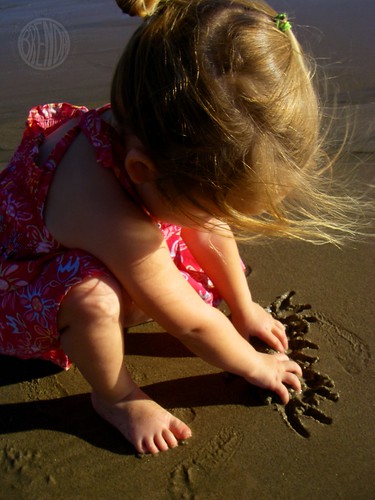 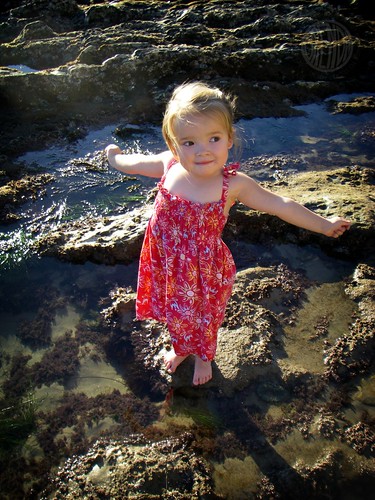 While we were there I was sort of mumbling disgustedly to myself about how much I hate this freaky summer weather (and the fact that I seem to have some kind of sinus problem) but then I saw a couple out in the waves that reminded me of something.

You can barely see them in this picture: 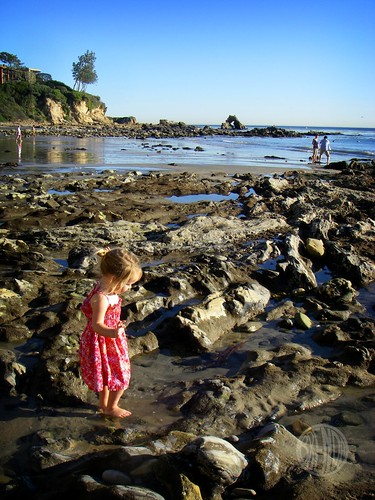 The girl was obviously pregnant. Her partner was taking pictures of her belly and the ocean behind her. It was very sweet. You could tell they were so in love with each other and their soon-to-be-born child. And it got me thinking…the tide was way out, the weather was freakishly hot, it was the middle of winter and I was sweating…haven’t I been here before? 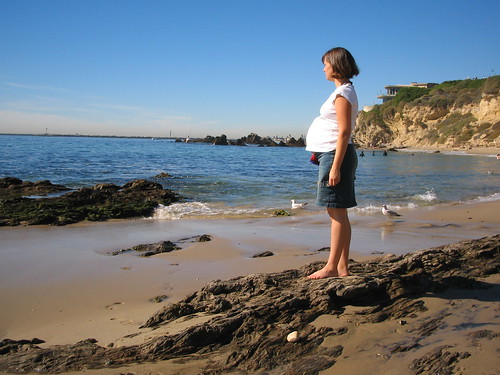 I have! This photo was taken on December 7th, 2005 just weeks before Bug’s birthday. So here we are now in January, 2009 just days before Bug’s third birthday…maybe this weather isn’t so freaky after all. Maybe I’m just not very good at remembering it.