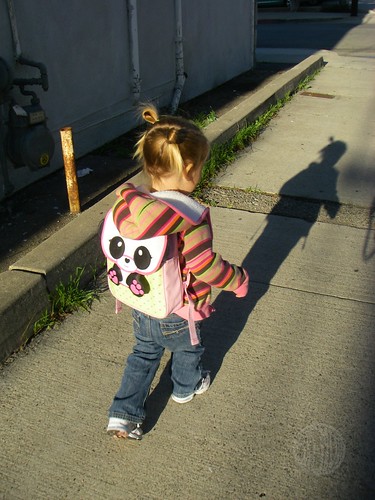 Today was a big day for us. Bug went to preschool. We’d been talking about it for three days straight and she was very excited. She loves school. She sees it on television, and she’s tagged along with her older cousins to their classes. Every time we see a playground she begs to go. I felt like she was ready. She’s young still, barely even three, but she’s advanced for her age and very social. I thought it would be good for her. If anything it would be better than more hours of boredom in our living room staring at the boob tube.

We discussed everything the way we do. She’s a talker and it’s not unusual for me to spend whole car rides discussing topics that you’d think would be way too complicated for her to understand. We talked about missing me and being brave. We talked about how there might be other children there who were sad and missing their mommies and maybe she could give them a little smile to cheer them up. We talked about lunchtime and snack time and craft time and playtime. We talked about the possibility that there might be big kids who might try to push her. We even covered how she didn’t really need a pacifier at school because she was a big girl. We went over and over everything. She seemed excited.

When we got to the school, my excitement wavered way before hers did. I couldn’t find the classroom and accidentally walked into a different daycare program that didn’t know us from Adam. That didn’t bode well for my over-protective inner momzilla. But we did eventually find our way and since we were half an hour early (again my over-protective inner momzilla trying to be prepared) everything went smoothly. Too smoothly actually.

I walked her to the classroom. I signed her in and when I turned around to give her a hug and say goodbye she was gone. She was clear on the other side of the room playing with a puzzle and another little boy. I said, “Come here Bug, give Mommy a hug!” She shrugged. Her body language suggesting, Can’t you see I’m busy Mom?!! I’ve got important things to do here! I told the teachers it was her first time at any kind of daycare and they were shocked. She clearly was totally fine with it. Finally after a hurried sideways hug from Bug, I left.

It was weird. I was walking away from my kid who has been by my side for the past three years straight. I kept feeling like I’d left something behind, like my purse but even worse. I left slowly, walking by each window to make sure she was still okay. Of course she was. She didn’t even look up once.

She’s been away from me with Gramma and her Auntie Heather of course, but this was with strangers that I didn’t know. The room seemed sterile and weird. I guess I expected it to be brighter and cheerier and with more sunlit windows. I know they have to keep things clean and this place was definitely very clean but there weren’t any obvious craft areas or little pretend kitchens to play in like I had imagined.

I’ve talked to friends who have their kids in this program and they speak highly of it so I’m sure it’s fine but it was just, you know…not me. It wasn’t me being there doing what I would do. Of course I had a thousand fantasies of working for the preschool for a day and introducing them to all sorts of crazy whacky Brenda activities but Toby quickly talked me out of that with a few swift reminders that there are reasons I’m not a teacher and those reasons are politics and mean parents.

So I left. I spent four blissful hours at Starbucks and got one single freelance job done. Time flies when you are working hard. I’d say I wasn’t even thinking about Bug but that would be a lie. I was worrying like crazy. But I had a big deadline today so the time went quickly for me.

I left a half-hour early and showed up way before my scheduled time to pick her up. I thought I would spy on her and my worried heart could take a rest. I was wrong. This heart will get no rest.

When I got there, right away I could tell things had not gone well. I could see her sobbing on the teacher’s shoulder, her little knobby mouse-ear ponytails quivering. It comforted me that the teacher was holding her and she wasn’t off in some corner crying but she was obviously CRYING! What happened to my brave girl?!!!

As soon as Bug saw me, she reached for me, her cheeks streaked with tears, and wailed “Mommmmmmy!” My heart lurched. What had I done? My poor kid! I grabbed her and pulled the spare pacifier from my purse as quickly as I could. We had agreed earlier that she could have her pah as soon as I picked her up. I felt like it was the least I could do to hold up my end of the deal. It wasn’t part of my plan, of course. I thought this would be the beginning of Operation Phase-Out-the-Pacifier-I’m-a-Big-Girl-Now. But picking up a sobbing tear-stained kid wasn’t part of my plan either.

“Oh!” the teachers exclaimed as soon as they saw the pacifier. “You should have given us her pacifier! That would have made everything so much easier.”

I tried to explain to the teachers that Bug and I had an agreement but it wasn’t really the time for chatting. All the other kids seemed a bit traumatized by Bug’s wailing and I could see that they had their hands full. I wanted to get to the bottom of the upset but at the same time I wanted to get out of there as soon as I could and calm Bug down.

We did exchange a few sentences. They informed me that I have a very intellectual child and we laughed a bit over that. I had a feeling that she would give them a run for their money with her constant chatter. I figured she’d either be the teachers’ pet or their worst nightmare. Apparently at one point she told them, “You have to go buy a car so you can take me home,” and they thought that was pretty funny. That’s my Bug. We argue all day long over everything so I’m not a bit surprised that she gave them a hard time.

I’m not sure what went wrong. They said she cried off and on from ten until noon. That seems like a lot of crying. Maybe this is normal. The teachers said she seemed tired and even almost nodded off on one of the teacher’s shoulders. If she’d had a pacifier she probably would have fallen asleep but that’s not what I wanted her to go to preschool for. She does get up at the crack of dawn and even I notice that she starts to get grumpy around eleven for me, but we always push off naptime and she seems to get a second wind after lunch. She doesn’t usually take a nap until one or two in the afternoon.

I’m not sure what to think. I don’t feel like she was traumatized. I know her cries, and she was definitely crying the drama-queen-I-didn’t-get-my-way cry and not the oh-no-the-world-has-betrayed-me cry. In fact, as soon as we were outside she was pushing herself out of my arms and wanting to go play on the playground. I tried to ask her what she didn’t like about preschool but she was way more interested in the duck pond nearby and was rattling on about feeding the ducks.

All the way home I prodded her, trying to figure out what exactly set her off but all she would tell me is, “I don’t like preschool because I don’t like preschool.” She can be stubborn sometimes like that. I’ve been trying to journal with her every night, asking her about her day, and often she will tell me over and over, “I don’t know,” even though I know she knows plenty. It’s some sort of game with her.

The good thing about having a talkative child is that she will tell me what went down eventually. Right now it seems like nothing really went down. Maybe that was the problem. Maybe she was bored. Maybe she expected to be around the big kids like her cousins. Maybe I can pull some strings and see if she can get into a class with older children. I sort of doubt that I can do that and she does have a friend that she knows in the same class so I’m hesitant to mess with what seems like a good fit. It’s too early really to say.

She seemed to cheer up pretty quickly and we even talked about going back next week. I just don’t know.

I think it’s my job to just worry until the end of time.