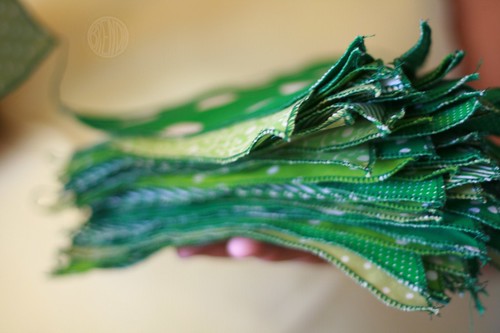 I’m sorry. I didn’t make Bug a dress out of all that green fabric. I kind of wish I would have but I had a different wild hair up my butt. That idea was to make streamers of birthday flags! Maybe I saw it somewhere, I don’t remember. 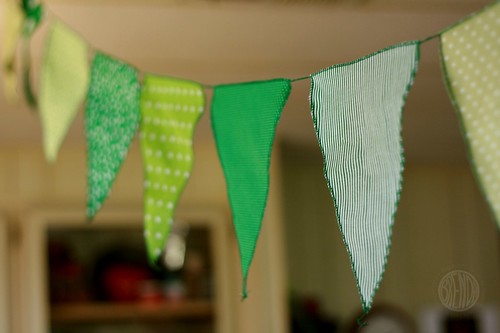 At first I was going to make paper flags on a string but after I spent a gazillion dollars at the paper store, I decided that was way too much money to spend on something that is not going to last. Buying a few yards of fabric was much less expensive. Funny how that works. 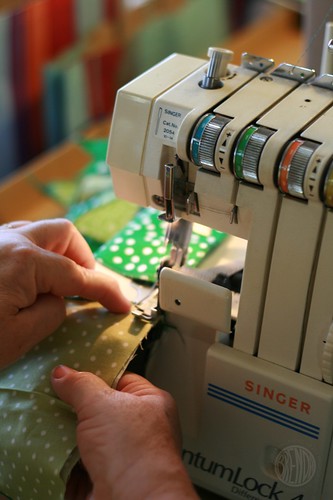 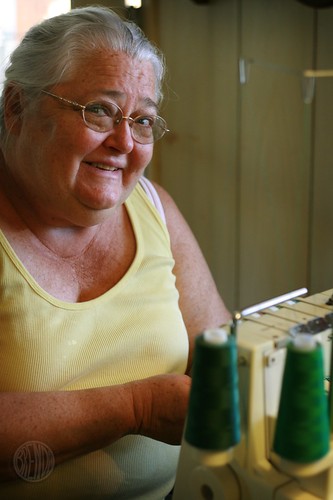 Of course it helps a lot that I have a mom who loves to help me with my crazy ideas and offered to serge the edges on all of the flags for me. CC and I cut the triangles and my mom serged them. We were going to attach the flags to cording but we decided that the thread from the serger was just fine. I’m really happy with the way they turned out. 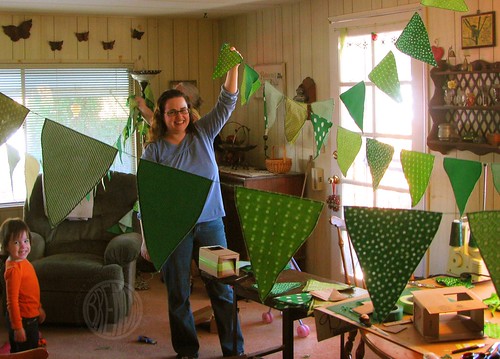 Don’t they look like fun? Jen stopped by with her kid and they thought they were very festive. We had to be a little bit careful about not getting them tangled, but I think they’ll work out just fine as long as we are careful to fold them up gently and not just wad them up into a bunch. The plan is to use them over and over for years to come and hopefully they’ll last as long as Bug’s obsession with green. 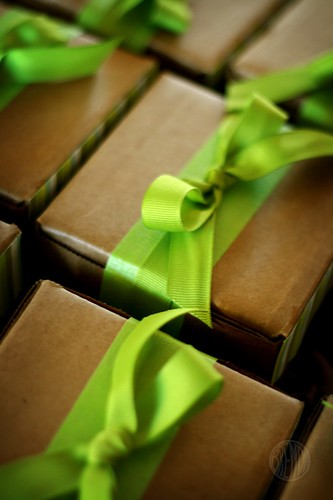 But that’s not all we did today. I made little mini puppet-show boxes to hand out at the birthday party. I know. I never do anything small. I could have just handed out the puppets on a stick tied up with a bow but I wanted to do something special and fun. What’s more fun that a little mini puppet-show theatre you can take home in a box!? 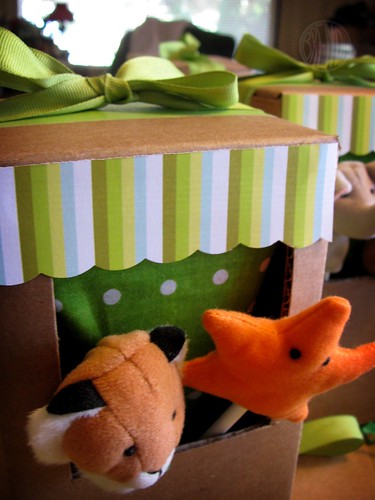 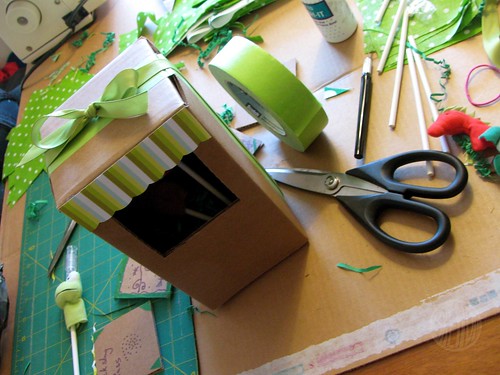 They are made of 4x4x8-inch boxes (that I ordered online from uline) taped closed with green painter’s tape. I cut two square holes, one for the little mini finger puppets to poke their heads out of, and the other for a child’s hand to fit in from underneath. I taped a green curtain inside and glued a paper striped banner on the outside. 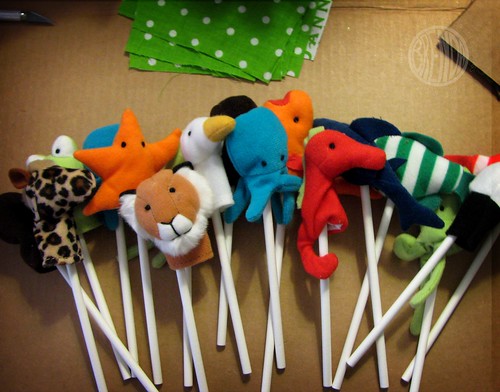 The finger puppets are from Ikea. There are pretty cheap, ten for six bucks. I thought I’d put them on green candy-cane sticks or green pencils but in the end I decided to make it easier on myself and just put them on lollipop sticks instead. The height was better and I’ve already done enough shopping around for green things. I love party planning but the shopping sometimes wears me out.

In other news, things are never boring out here at my mom’s. (That’s where I am if you couldn’t tell from the photos.) She doesn’t live at Camp Chaos anymore but that doesn’t mean the chaos hasn’t followed her. We call her house Camp Chaos West.

This afternoon while we were all home someone snuck into my mom’s backyard and left two mountain bikes bungee-corded under a tarp next to her big saguaro cactus. There is a lot of junk around my mom’s house (you know with the never-ending saga of moving that goes on around here…) and I guess some thieves thought they could stash their stolen bikes outside her house without anyone noticing.

It’s all very strange. We called the police of course and filed a report but we can’t seem to figure out why someone would do that. The bikes were very methodically covered and bungee-corded. It’s given us all the heebie-jeebies. I’m just thankful that CC and I were here and my mom was not alone. We figure the thief will come back for the bikes probably tonight so every little noise has us spooked. My mom and CC booby-trapped the yard but it’s pretty windy tonight. I hear lots of sounds. Could that crashing sound be an aluminum can blowing around or some thief tripping over the empty gas can my mom rigged up?

Guess who’s getting a watchdog from the pound tomorrow?

The thief turned out to not be a thief at all but a friend who wanted to drop off some bikes for my dad to take back east on his next trucking trip. So, now the bikes have to be retrieved from the police station but at least some mysteries have been explained.

p.s. If you like the flags, check out my mom’s etsy shop!