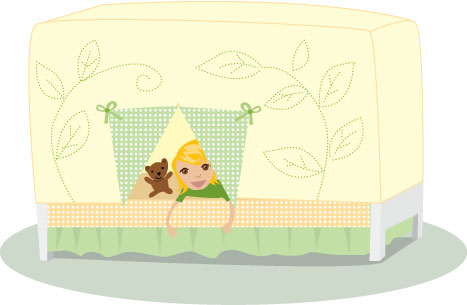 So I had this crazy idea to make a tent that would fit over Baby Bug’s old crib. She doesn’t sleep in her crib (even though we took the side railing off it and she could if she wanted to). It just sits in her room taking up space and collecting stuffed animals. We don’t want to get rid of it yet or even disassemble it (if it would even make it through another disassemble and reassemble) because we keep hoping I’ll get pregnant and there will be another baby in the house.

However, the years tick by and the crib just gets in the way—especially now that our art-supply collection is taking over the other side of the room and giving me many organization nightmares. The crib is just an eyesore. But what can we do with it?

Baby Bug does like to play in it. In fact, it is her own personal trampoline. She is constantly scrambling up and down into it and play-acting out some tragedy with her stuffed animals taking nose-dives off the edge.

I thought maybe I could make a tent that would go over the top of it and it could be a little play house for her. This way it would look less crib-like and I wouldn’t have to resent it so much for taking up space and reminding me that I am still not pregnant.

So I pulled out the old fabric that I used to cover my couch before The Great Couch Cover and set to sewing. And that is where things sort of went down hill. I don’t know. I think my good luck with the couch cover was just beginner’s luck. Sewing is a pain in the you-know-where! It takes too long and it never turns out how you expect.

Which brings me to something I’ve been thinking about. If you can see it in your head, can you create it? That is the question.

I once got to talking to a musician about music and how to play a song by ear. He said, “If you can hear the song in your head, then you can play it.” This may not be true for all people but it is somewhat true for me. I’m no talented musician by far but I can usually plunk out any tune I hear, one finger at a time on the piano. The guitar is a whole other story but a piano is pretty logical since the notes are all in a row. Anyway….the same thing sort of rings true for artwork. If I can visualize a drawing in my head, I usually can draw it.

I know you are not believing me on this but hear me out. Let’s pick the hardest example: a horse. I cannot draw a horse because I do not know what a horse looks like. I mean, I know a horse has a long mane and four legs and a tail etc but I don’t really know the anatomy of a horse. Their legs bend backwards at the knee or something weird and when my brain tries to fill what those lines would look like around the knee area, the picture in my head starts to get fuzzy. So that’s why if I drew a picture of a horse it would probably look like crap.

So my theory is this: if you have enough patience and you really pay attention to the picture you see in your head, then you should be able to draw it. A lot of pictures are too much trouble. Who wants to focus on drawing all the spokes in a bicycle tire for instance? But other things like a simple silly cartoon monster are pretty easy for someone like me. I think this could be true for a lot of people but it does involve turning off the left side of your brain which can be a bit tricky, especially if you like to know how to add and subtract numbers.

Anyway, back to my sewing story. I thought if I could draw my tent idea, then I could sew it. And maybe I still can. It’s just taking a lot more patience than I was willing to invest. 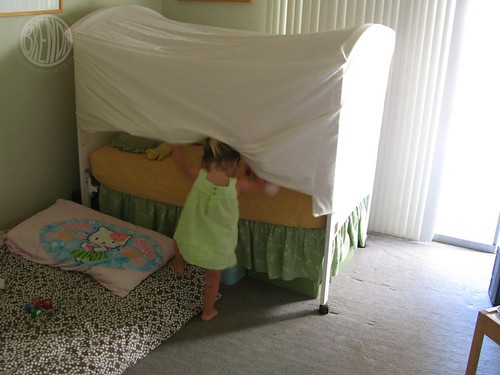 I sewed it together and it looked like crap. I cut my slit for the door and the whole structural integrity of the entire tent sagged and collapsed on itself. This is actually because I didn’t have enough fabric for the back panel. The back panel is only six inches where it should be 24 or so. Once you cut a slit in the front panel, there is not enough tautness in the fabric to hold it in place. I’m not really explaining that very well but just imagine it falling in on itself like soft bubble gum and you’ll pretty much have the idea.

So I sewed my door slit back up and called it a day. Maybe I’ll make a trip to the fabric store another day and give it another try. Or maybe it will just go down in history as one of those projects that flopped. I figure I’m always bragging about the successful projects on this blog, I might as well share a flop or two too.

Maybe there is somebody out there who really can sew what they see. If so, you are more than welcome to steal my idea. My only request is that you share photos with me when you’re done. 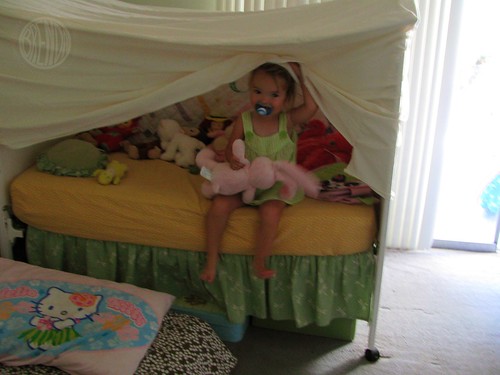 Anyway, all that really matters is whether Baby Bug likes it.