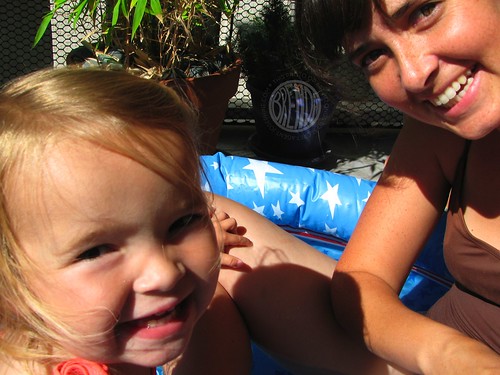 It was HOT today! Yowzers! I mean, if you call 90-something degrees hot—which we do because we’re pansies. I was sweating and generally feeling sticky and disgusting sitting around in our apartment so we decided to drag out the kiddie pool! Nothing says summer fun more than a kiddie pool on the patio. I love our little Fourth-of-July—inspired kiddie pool. 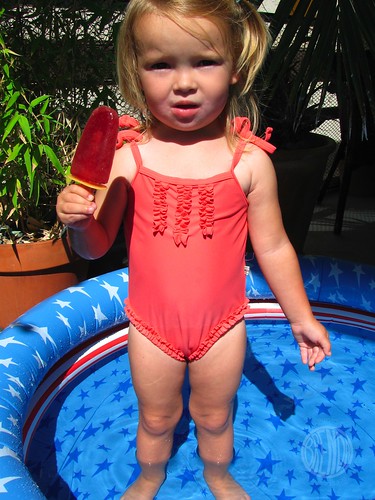 Of course nothing says summer more than a popsicle in the kiddie pool! In my opinion, the pool is really the only place popsicles should ever be enjoyed because, look, Mom! No drips! But I have thin teeth that are sensitive to cold so fun things like ice cream and popsicles are really a waste on me.

I could go a whole year and never eat a popsicle. I’m the same way with soda. I just don’t really care for it. But there’s that one day when I’m having a big ol’ slice of pepperoni pizza where an ice-cold root beer would just hit the spot. You know what I’m talking about. Same thing with popsicles in the pool. 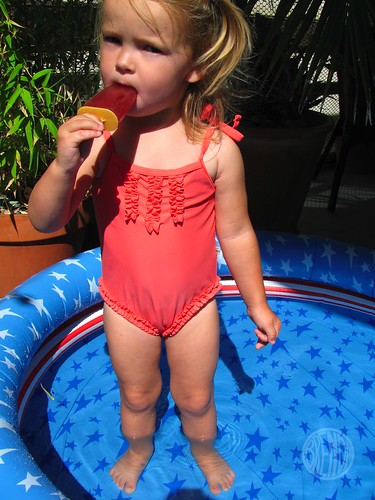 Too bad we didn’t have any green popsicles. Baby Bug does not share my disinterest in popsicles and has quite a preference for green popsicles. Specifically, the Otter Pops my mom keeps out in her garage freezer. So that face up there? That is because the funny homemade grape juice popsicle was NOT green. She was very skeptical and I ended up eating both hers and mine. Apparently it was “too sour.” Whatever. Those stupid Otter Pops have ruined my child forever.

Just kidding. Otter Pops are great. They are just so…American. Like extra cup holders in Chryslers. Like CD players built into strollers. Did I tell you about that? I don’t think I did. I didn’t blog about the local 5K race (that we did not run because we got there late but instead kicked everyone’s butt in the “fun walk”).

There was a mom with a CD player built into her stroller walking the race with us! She was walking along blasting us all with her music. It was the strangest thing I have ever seen and heard. I can’t remember what song was playing but I’m sure that was worthy of making fun of too. It was just weird to me. Weirdly American.

We had a really great time in the kiddie pool. It cooled us off like a charm. Then we got a little bored of it so we decided to throw the cats in for kicks. We are so evil that way. I totally and one hundred percent blame Toby for this sport we have created over the years. He started it. But I have to admit I found it completely hilarious and entertaining. 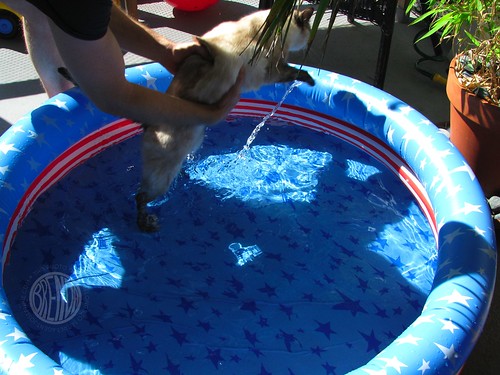 I know, I know…the poor cats. But you know what? They sit around in our house all day long doing nothing. They need some excitement in their lives. They need enrichment! And besides Maddy, the spaz cat, totally got us back for our shenanigans. 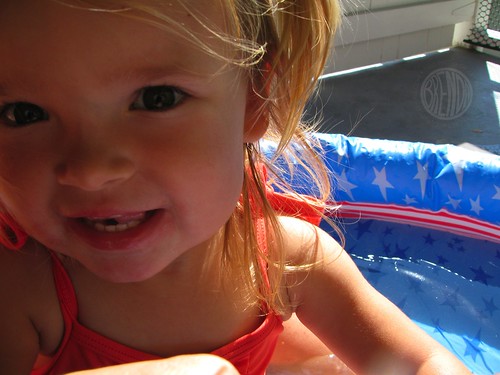 I was prepared to call it a day and throw the pool out. It only cost me nine dollars or so and I figure we’ve got our money’s worth out of it. But Toby, master MacGyver that he is, got out the tape and fixed it. Good as new! So we saved the planet from another big piece of wasted plastic. I have a feeling we’ll be using it all summer. 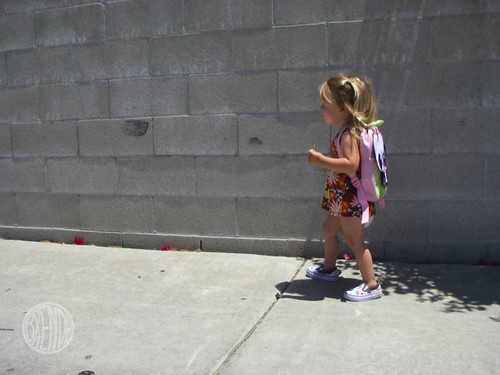 I just have to post about this photo really quick before I move onto the next post. As I shared on Flickr, this photo cracks me up because:

1. Obviously, she’s going somewhere. I think I need to start a collection of just these side-profile shots of her being very determined about walking somewhere.

2. Pants are optional after 3pm (post-naptime).

3. She was very determined to walk to the hospital (that is not within walking distance) to get a “new baby.” It’s not that we’ve been talking about having a new baby (though we do plan to and are just not pregnant yet), I think she just remembers every single TV show she ever watches and then acts it out. Apparently Franklin or somebody got a new baby sister and now she is determined to get one too. I guess that was what the backpack was for. You know, to carry the baby in.