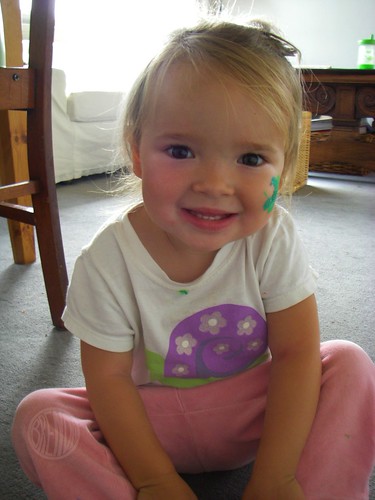 It’s been since Tuesday (today is Friday) that we went to the Huntington Beach Library Festival of Folktales and Baby Bug got her face painted. She STILL will not let me wash the green flower off her cheek. I’ve resorted to sneakily trying to peel off one petal at a time but it’s not working. She runs away from me like I’m trying to peel her toe nails off or something.

I think she thinks the face paint is like fingernail polish and you have to leave it on until it wears off. She LOVES finger nail polish. Yes, I took her to a nail salon once (or twice or maybe five times) and let her get her nails painted. I know. I’m spoiling her rotten and I intend to stop that right now. But she loves it so much! It’s hilarious.

The other day we went to the grocery store and because half the parking lot was being repainted, we had to park way over in the back 40 next to a nail salon. Before I could even unbuckle her from her car seat, she was taking off her socks and shoes in anticipation. Which is sort of unexpected because it’s not like we had talked about going and it’s not like we had ever been there before. I guess she spied the giant painting of a dragon lady fingernail on the salon window and figured that was where we were headed. Which we weren’t. I always love to start off a trip to the grocery store with a tantrum over green fingernail polish. Good times.

I’ve been able to reason with her about her flower on her face with the bribe that I might paint another one on her face if she lets me wash this one off. She seems to think that’s okay and then even asks for a “red red rose like mommy’s” which is actually a big scab on my nose from a zit that I wouldn’t leave alone. Don’t you love kid’s interpretations? I have a red red rose on my nose. How sweet.

So far I have not gotten any cooperation out of her though. Discussions are one thing. Getting near her with the wash cloth is a whole other story. I may have to resort to pinning her down and ignoring the shrieks if it doesn’t wear off soon.

Thankfully, we had swimming lessons today and the one-two-three dunking sort of wore away at it a bit. I’m just afraid that the paint isn’t good for her. With all the paranoia about plastics these days, I’m thinking the puffy paint they used at the library can’t be that good. Who knows.

While I’m on the subject of face painters using puffy paint, how cool is that? I’ve been dying to have someone hire me to be a face painter for their kid’s birthday party (anyone? anyone?) and now I find out via the HB Library that you can skip that greasy stage paint and just use puffy paint?!! I didn’t get a chance to look at the bottles up close but they sure looked like the ordinary stuff you buy at a craft store. I’ll have to research that further. 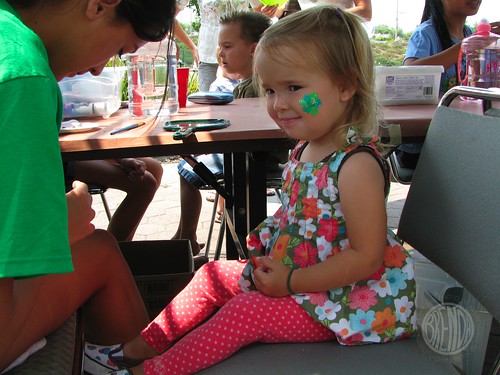 So that’s my news. The Library festival was awesome. I have a little movie over here of the live entertainment (bad quality, sorry). I think all moms should check out their library’s summer event schedule and if your local library sucks coconuts like mine does, then skip over to Huntington Beach (if you’re local) and go to their events. A little birdy even told me they are giving away tickets to Legoland. Nothing to sniff at since Legoland tickets are SEVENTY BUCKS these days.

Seventy dollars! Who do they think they are? Disneyland?!! I don’t know. I haven’t heard that many great reviews for kids Baby Bug’s age but I’m dying to go anyway because I just love legos! My brother and I always played with them as kids. I think that was the one toy we agreed on. (Speaking of legos, my friend Deliajude had a lego birthday party for her son way back in March. Isn’t that a cool idea? I’ll have to save that away for my party site.)