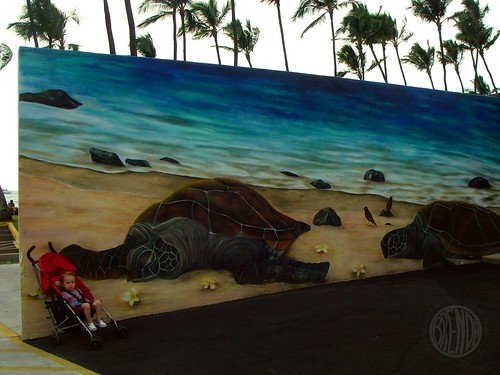 Bug and I did some “adventuring” downtown yesterday. I’m so glad we decided to pack the stroller at the last minute. It was a bit of a pain in the neck at the airport but it has paid for itself here when we cruise up and down the main strip. 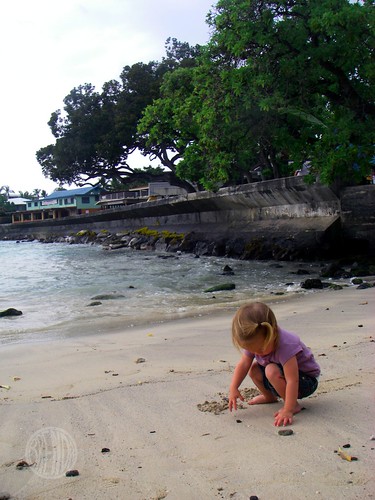 The main drag is right along the ocean with patches of sidewalk here and there between a retaining wall that keeps the ocean out and the road that is pretty much a “cruising scene”. Some parts are narrow and if you wanted to, you could stick your hand out and give some gangster a high five as he rolls by in his lowered truck with the bass booming so loudly that his door, that is twisty-tied on, rattles to the beat. 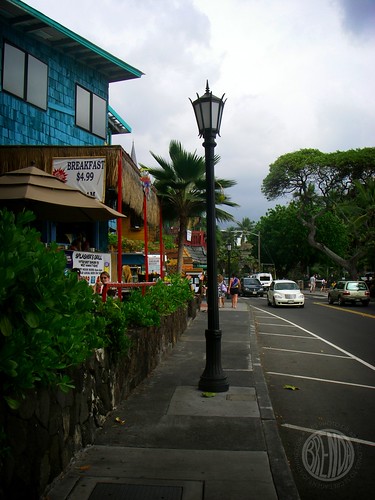 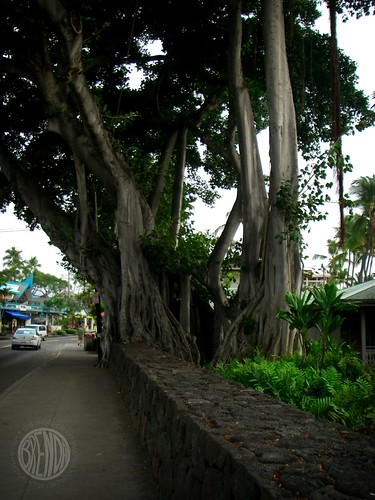 Most parts are totally safe but I am very glad to have the stroller because as you know, Baby Bug does not like to walk in a straight line and if I let her loose she’d be picking up cigarette butts from the gutter and running out into traffic.

There is definitely a bit of “Spring Break” atmosphere here in Kona. (And why not?!!) It reminds me of Mexico except more expensive. There aren’t any kids selling Chiclets and you can’t get a margarita for a dollar but there are definitely drinks flowing and lots of people just out to see and be seen. 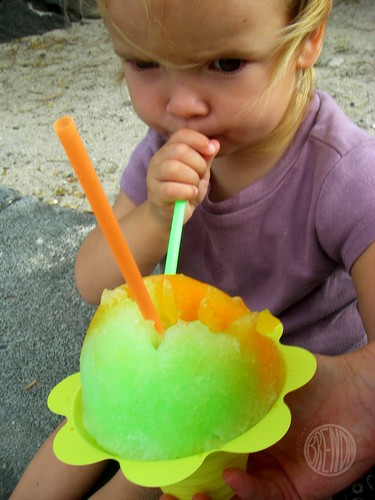 Even though it can be scary at times to walk the streets of an unknown city, I really do love exploring. I like being somewhere long enough that you start to feel less like a tourist and more like a local. The woogies (what Toby calls tourists) are so thick here, it’s hard to see what the locals see. But if you look between the shops selling imported shell necklaces from the Philippines (that I’m totally going to buy anyway because hey! they are only 39 cents!) and the bars crowded with people drinking way too much tequila, you can start to see a glimpse. 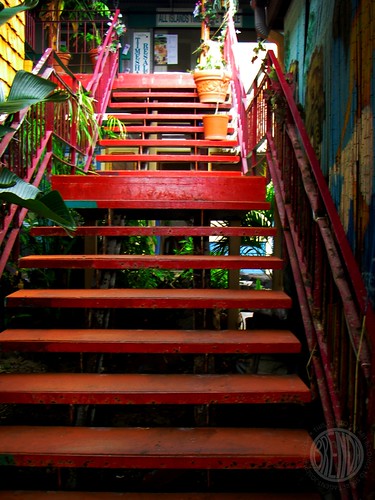 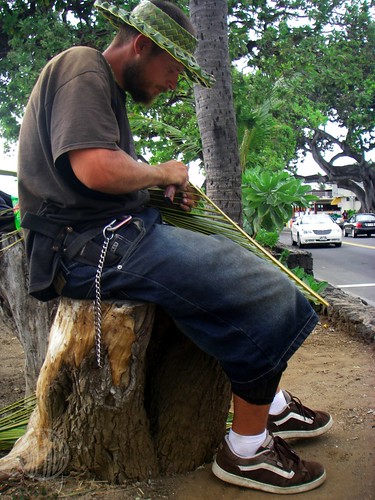 We did something really fun yesterday. I had passed this Weaver Man a couple of times and I was intrigued by the funny palm frond hats he was making. I was a little afraid to stop and buy one since he often had a pretty shady crowd of people who looked like they had meth mouth hanging around him. But I finally got up the guts to inquire and I’m so glad I did. 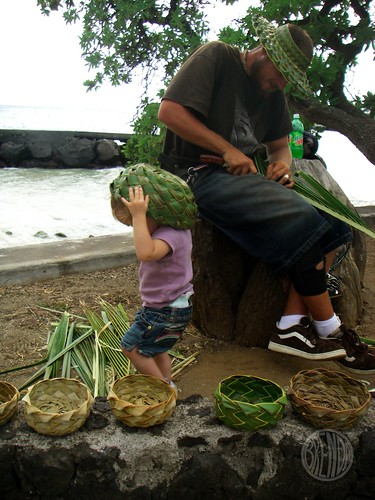 He was a very nice guy and ended up making a custom hat just for Baby Bug. She thought it was grand and wanted to try on all his bowls he had out on display. I was worried about her getting in his way (and even worse in the way of his knife) but he said she was fine. He told me that she was actually good for business. 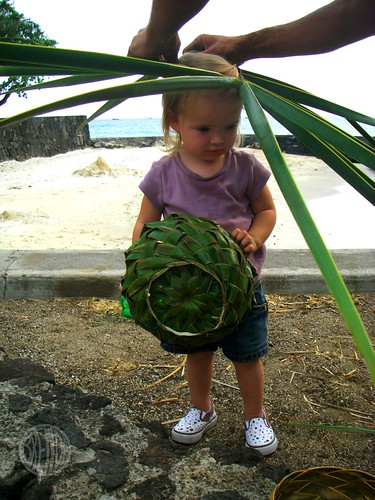 I guess you don’t have to have a permit to sell your wares along the highway here in Kona but the police do harass you if you seem to be there just to sell drugs or something. So he was very happy to have a mom and daughter hang out with him for the half hour it took him to make Baby Bug a hat. 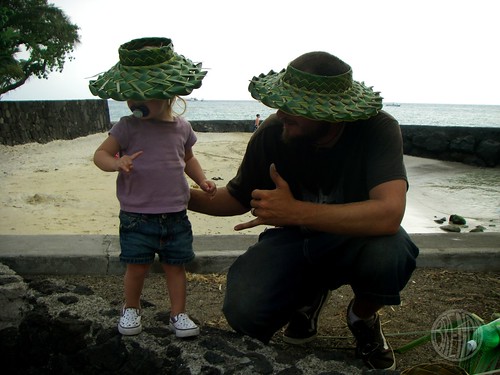 When he was done, he wanted me to take a picture of him and her together because apparently these palm frond hats last for 40-60 years and she will probably have it long after her little two-year-old memory of him making it has faded. I thought that was a sweet sentiment and of course I was happy to oblige since after all everything is bloggable! 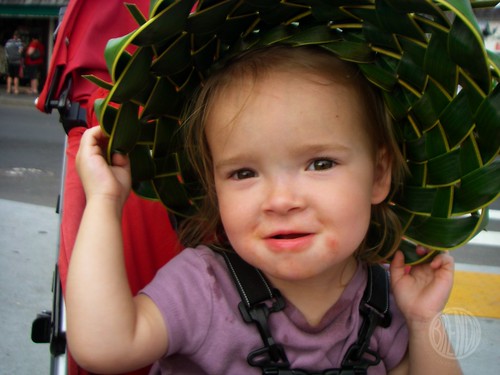 I think the hat is pretty cute and I will definitely try to keep it for a long time. I might even have to go back and get one for myself. Who knows maybe I’ll start a new trend back on the mainland. 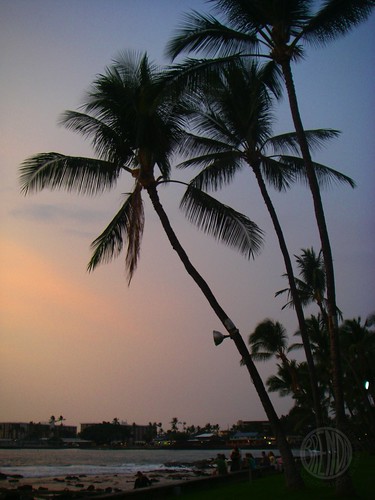 That pretty much sums up our day of adventuring. I left out a lot of parts (like the little beaches we discovered and the drunk guy sleeping under a giant palm frond) but you can sort of figure them out from my flickr pictures. Later we met up with Toby for dinner and ended our day the usual way with a slice of sunset for desert.