posted in domesticity, Newsbreaking Hair News on January 29, 2008 by SAJ 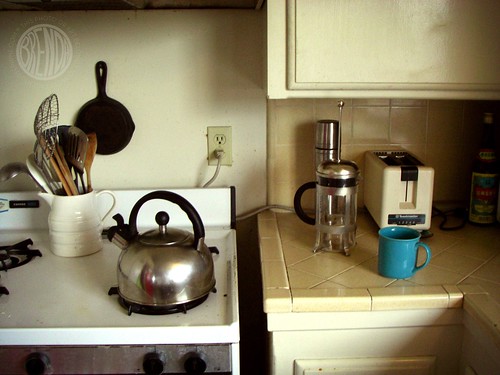 Several weeks ago my beloved Hello Kitty Coffee Maker took its last gasping breath. We used it for two years straight which is pretty good considering it was pretty cheaply made in the first place. We weren’t even supposed to be using it every day anyway. It was the stop-gap coffee maker to help us get by when our original wedding present coffee maker broke.

The Hello Kitty coffee maker was supposed to be for me when I was pregnant so I could have “decaf” all to myself while Toby drank the more potent stuff from the regular pot. But you can imagine my inner glee when our regular coffee pot broke and Toby (Mr. I’m-too-manly-for-my-Banana-Republic-pants) had to pour himself manly coffee from the pink Hello Kitty pot every day. It kind of made up for the fact that I was struck with the morning sickness from hell and coffee smelled like sour garbage for the entire nine months. 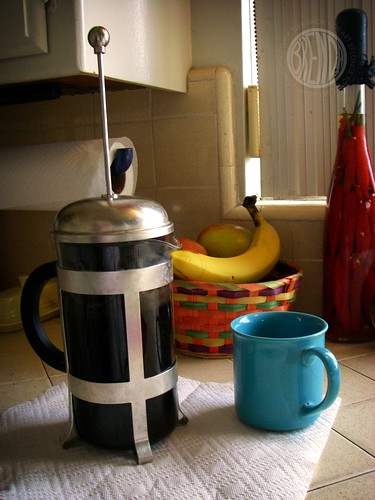 Anyway, this post is not about that. This post is about my NEW FRENCH PRESS! I am so in love. Could it be because it has the word “French” in it? Possibly. But really it does make a fine cup of coffee. It took me a while to find the right ratio of coffee grounds to hot steamy water (the markings on the side? totally worthless!) but once I got it right, I was hooked. I will never go back to the old style coffee maker again. I love it that much. 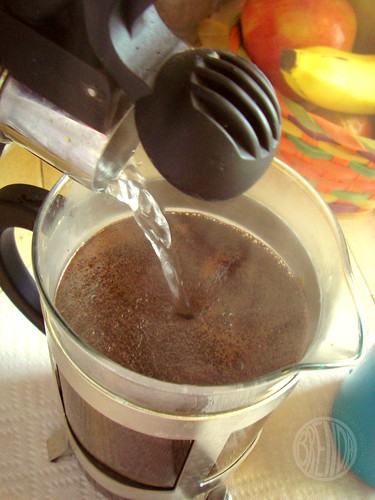 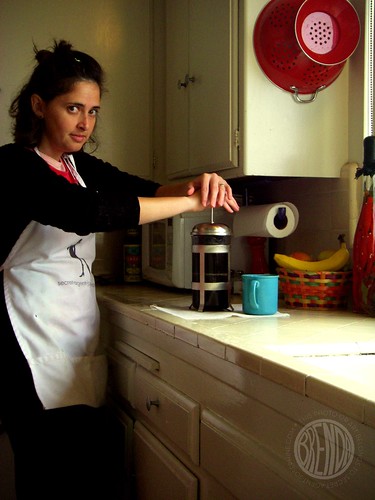 When you look like this in the morning an imagination is quite helpful. Ack! Did you see my hair? What exactly is going on up there? Obviously I cannot stand for one single hair to touch my forehead. Where is my chic hair-do of a few months ago? Do I need a hair cut already? I think so. And lets not even talk about the apron. Ugh. I am so matronly sometimes.

But anyway, that photo is taken so you can see how the French Press is used. This step is really important. You rest your hands on the little plunger knob thingy and just let them slowly push the plunger down with gravity only. No force allowed. Or else you will have grounds squeeze up the side and ruin the whole zen-ness of it, or just plain burn you. Not that I’ve tried forcing it but by reading the directions, I kind of got the idea that it could be very dangerous. 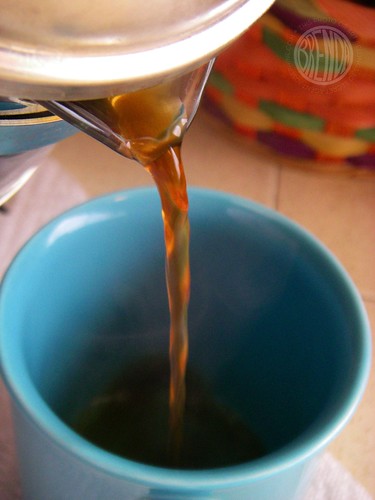 I like the process. It’s almost as nice as cooking spaghetti for dinner and drinking a big glass of cabernet while you cook. But then that’s just me. I normally hate cooking. I don’t mind making coffee.

I’m a natural morning person so it’s kind of a delayed gratification thing. I make myself do all the dishes and prepare Baby Bug’s breakfast before I can get anywhere near a cup of coffee. It’s my treat for the morning and I want it to last as long as possible. 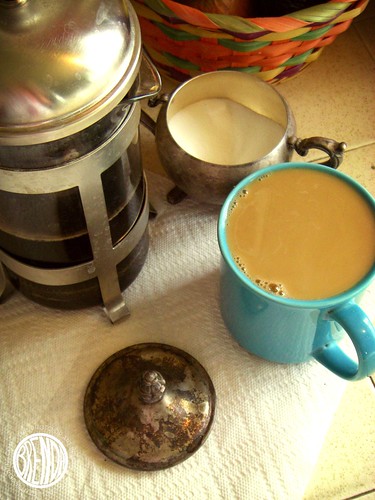 It could be a bit of a sugar addiction. I’ve been trying to cut down on sugar for years and for some reason this is one area that I just can’t kick it. I cannot stand any kind of fake sugar. I’ve tried them all and nobody’s foolin’ me. So I’m just kind of stuck. Happily stuck. 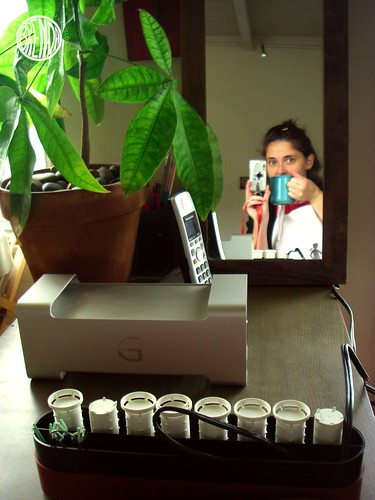 Now off to do something about that hair! Maybe an external hard drive will help?