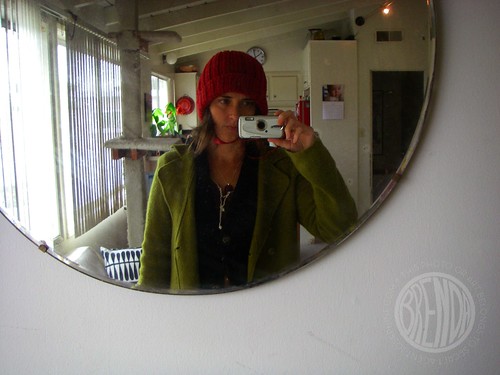 hmmmm…. I don’t really have a cohesive post tonight. Just some random things.

First up: I updated my computer the other day and now everything is screwed up. Don’t you hate that? WordPress is giving me trouble. I hate this type in code bit. I always type with code. I don’t need those fancy buttons. AND WHY does it reformat my text for me and take out all the paragraph breaks? Frustrating! I’m sure it’s some dumb user error but I can’t figure it out. 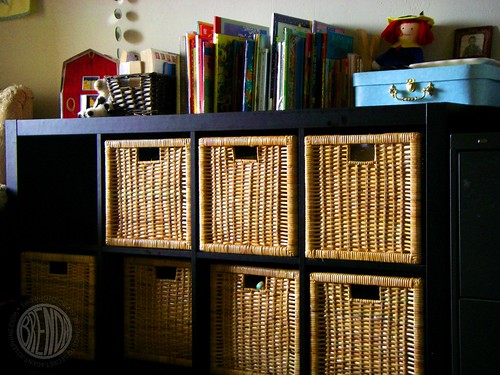 Second: My new IKEA shelves are the BEST!!!! I love them. I often go in Baby Bug’s room just to admire them. They are so neat and tidy. You would have no idea there is all kinds of crap in there. Out of sight, out of mind and my mind is feeling better already.

Also! See all those books on top? That’s what Baby Bug got for Christmas from my in-laws (along with the motorized 4-wheeler that had to be sent back to the factory because of a defective battery). My mother-in-law has been saving books for her grandchildren since 2003! Baby Bug wasn’t even born then! How sweet is that? She’s thoughtful like that. The books are the best too. They are all the classics: Curious George, Madeline, Corduroy, Paddington Bear… all of them. All the books that I would have bought if I was more on top of it. I’m so happy for Baby Bug.

Our nightly reading routine has gotten about five thousand times more interesting for me. Of course Baby Bug is only two so that means she likes to read the same books over and over again. She is very suspicious of new books but I’m breaking her into the new ones slowly. The other thing is her obsession with green. She only wants to read the green books. Good thing the Paddinton Bear book is green. We read that one every night. 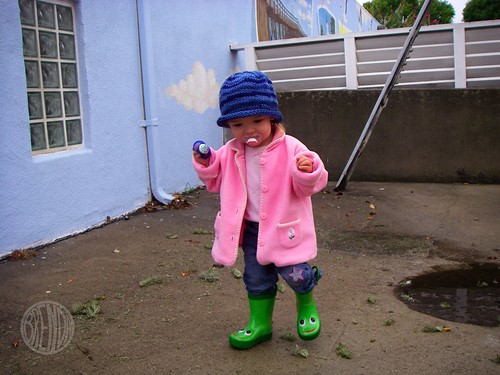 Third: it’s been raining like crazy here. A bit depressing really. It’s not that I can’t handle the rain it’s just that I miss the sunshine. A lot of our daily routines (like taking walks and taking pictures of the ocean) have been curbed to the indoors. We took a walk in the rain today. It was kind of fun. Baby Bug likes wearing her frog boots. 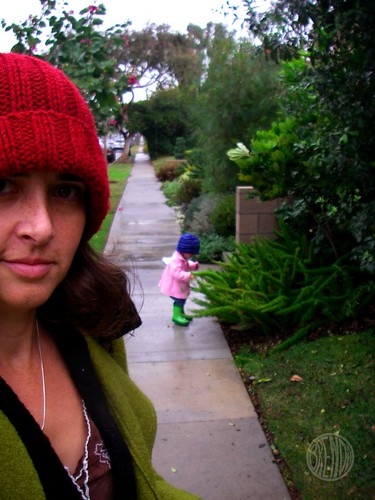 She likes wearing them so much she insisted on wearing them to the grocery store. Of course that was an issue because the boots are two sizes too big and they fell off while she was dangling her feet from the cart seat. And then it was bloody murder trying to talk her into putting them back on again. Now she thinks it’s fun to wear just her socks while grocery shopping. I ended up letting her because I’m choosing my battles and that was not one of them.

I did win the battle over buying everything green. “That’s Baby’s green juice!” she says leaning half out of the cart and trying to grab a bottle of grape juice with a green label. “That’s Baby’s green butter!” “That’s baby’s green cookies.” Everything is green. You never realize how much green is used in packaging until you have a toddler who assumes that if it’s green then that must mean it’s for her. This green obsession is so exhausting.

The other day I bought myself a new green shirt. I wish I had a photo of it. It’s pretty. It’s made in India so that means it will probably shrink, run and fall apart if I ever wash it but it is still very pretty. It has little green and purple flower pods and tiny purple beads sewn on it. The beads might be sparkly also.

When Baby Bug saw me wearing my shirt for the fist time, her eyes widened with lust (for the shirt, not me). I was scared for a minute that she was going to demand I take it off. But instead she hugged me. Or I should say she hugged my green shirt while I was wearing it. It was a sweet moment that made me want to wear my green shirt every day. Too bad it’s sure to be dry clean only.

I hate clothes made in India. Nothing against India as a country. It’s just the dies and fabrics… they are beautiful but not meant for longevity (or wearing to death by me). I vowed I’d never buy another item of clothing made in India after the great disaster of the brown shirt with dark brown ribbing that ran all over and ruined it. It says “hand wash” on the label but who hand washes? That’s what I used to do when I was single and I was “waiting by the phone” for some boy to call who never called. I’ve got no time for such silliness now.

Whatever. It’s still pretty. I just won’t sweat in it. Ha ha ha. I’m so funny. 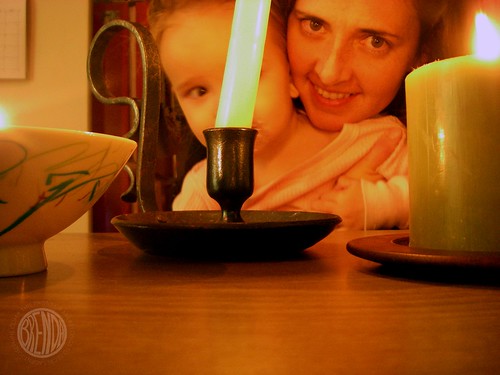 Fourth: the power went out the other day. It was quite strange. No storm really, just some sprinkling and kabamao no lights, no microwave no space heaters. It was dinner time and I’m proud to say I lit some candles and continued with cooking as if nothing happened. I’m such a girl scout. Thankfully we have a gas stove and I already had a pot of spaghetti bubbling. It was kind of fun and romantic to cook in the flickering candle light. I was actually a little bit bummed when it went back on.

I was way more bummed about our internet being down. It was down all day and all night. I’m a wreck without the internet. But you already knew that. 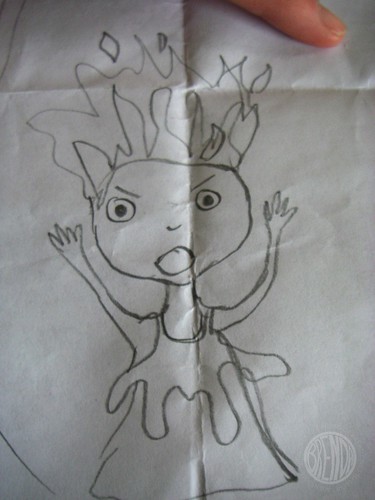 It is so sad and horrible but I have been persuaded by my relatives (aka Toby the evil husband) that Baby Bug does not need the pomp and circumstance of a “birthday party” in such a fashion as I am accustomed to throwing. Yes, I admit last years was a bit over the top but I am sooooooo sad not to be doing it again. I live for these moments.

I gave in this year because our schedule was so up in the air. I thought we were going to be in Hawaii but those plans have been pushed back. So here we are a week away and I have no time to really put together what I wanted to put together. Also part of me doesn’t want to throw all that money at a party when Toby isn’t behind it. He told me I can throw a great big bash for her third party so maybe I’ll do that. Or maybe I’ll throw a party when we do get back from Hawaii. 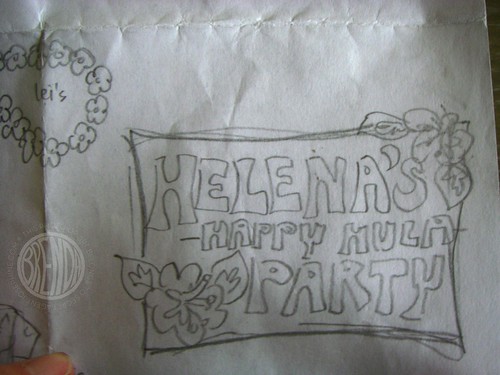 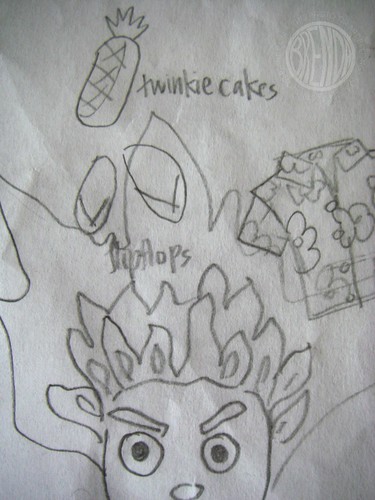 I was planning on having a Hawaiian party anyway. I had all these ideas to make little “Pele the Volcano Goddess” dolls sort of like the Gumballs I made last year. I even tried to dream up a way that I could make a giant paper mache volcano with crepe paper flames that would blow up from a hidden fan inside the volcano’s lava pit. We could have twinkie cakes iced to look like pineapples and ham and pineapple pizza.. oh it was going to be grand! Like all my parties. I have trouble with the word “moderation”. 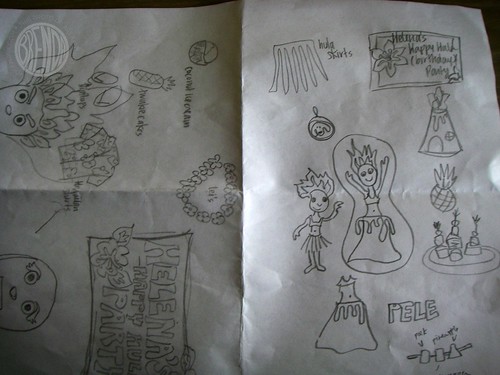 Instead we will have Gramma Pat and Uncle George over for pizza and a GREEN cake. And then we will go out to the sticks and have an all green food dinner with my family. It will still be fun. I think as long as there is a candle and we sing “Happy Birthday”, Baby Bug will be happy. And just think, I have a whole YEAR to plan her third birthday party. Paper mache doesn’t seem so outlandish when you put it in that perspective.

Sigh. I will be sad though. Pizza and green cake with two relatives is NOT a party. That’s like a regular thursday night dinner after I spend the whole day at the laundromat kind of night. My hair is more of a party than that. 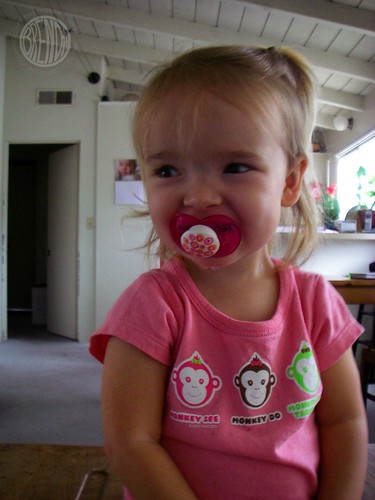 Do you think she’ll care? Probably not.