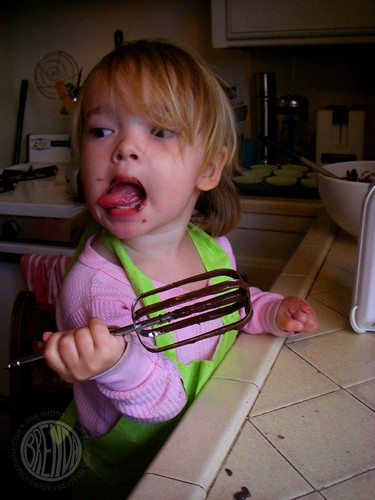 Wow. What a fun day. I really underestimated how fun making cupcakes, getting some balloons, having some pizza with relatives and a bonanza of presents could be. It was a blast.

Bug just makes me proud. I don’t want to bore you with gushing but she is just a kick in the pants ALL DAY LONG. I think I could live on a deserted island with just her and be fine. Well, maybe I’d need an hour off every once in a while but really she is probably the most fun companion I’ve ever had. Sorry Toby. 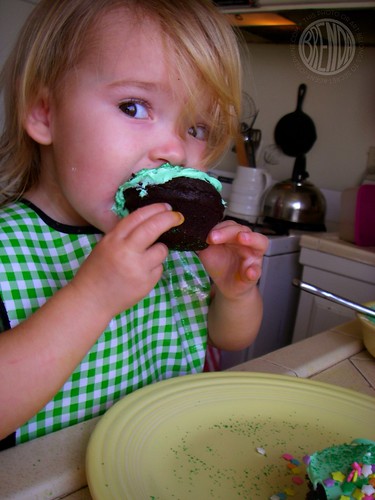 We started the day off right with a breakfast of champions. Chocolate Cupcakes! It wasn’t supposed to be that way but somehow early-morning cooking and decorating turned into sampling. What was I gonna do? Say NO on her BIRTHDAY? I think not.

Technically today was the day before Baby Bug’s birthday but we celebrated it as her birthday because Gramma Pat had school to go to on Thursday, Baby Bug’s actual birthday. Gramma Pat goes to school to stay sober and we are very happy for that. It’s worth rescheduling around. 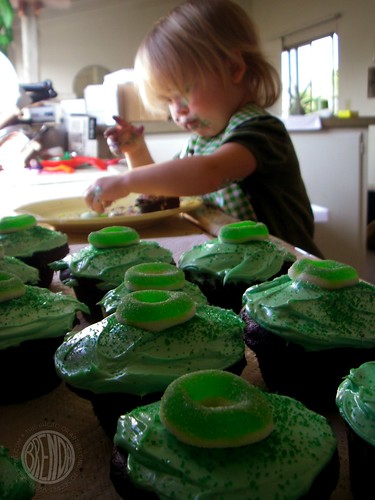 Anyway, making chocolate cupcakes (from a mix—groan, I know) with green icing was totally fun. It wasn’t exactly what I had in mind but it kept us both entertained for hours. Or at least until it was time to go buy BALLOONS!!!

My biggest regret of today is that I did not get a shot of little tiny Baby Bug holding her giant bouquet of green balloons. You should have seen her face. She was in ecstasy. Her eyeballs looked like they were going to float up and out of her head just like the balloons. She looked like she was right out of a cartoon about to float away with the balloons into the wild blue yonder. Thankfully she didn’t and we managed to wrestle them into the car without a single pop. 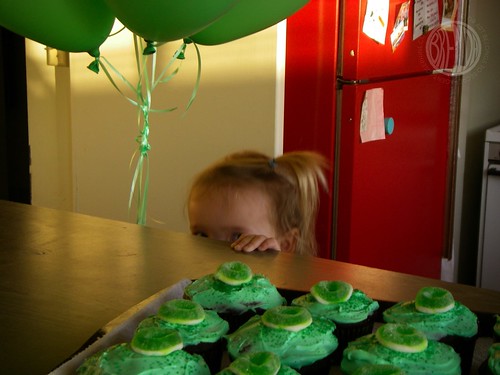 Then it was off to pick up Gramma Pat and the rest of the day was pretty much a blur of hyperactive-toddler on too much sugar and pizza and presents. 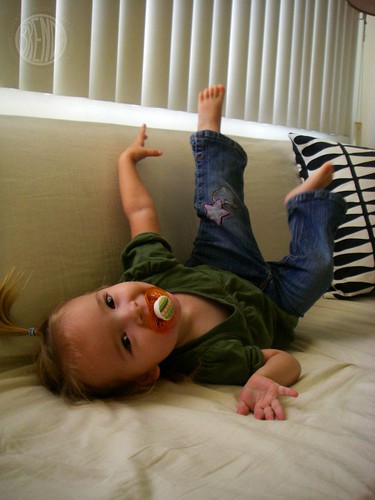 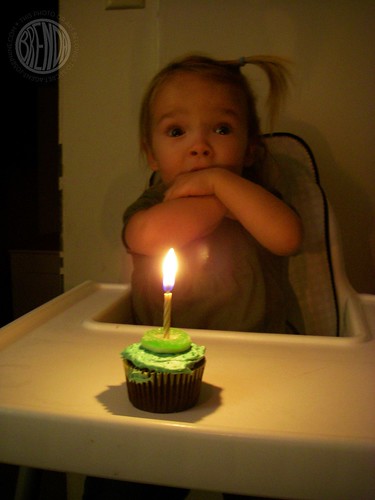 Happy Birthday Bug! I’m sure glad you were born! 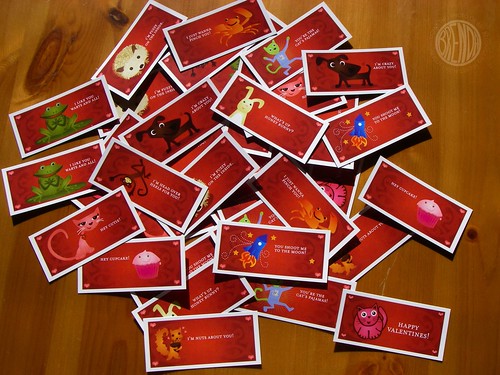 I probably shouldn’t be posting about these yet since I don’t quite have the packaging figured out but I’m anticipating a busy day tomorrow and I know I better put them up while I’m still suffering from insomnia. Actually I’m not suffering. I like being up at night. I’m probably just not going to like it very much tomorrow morning though. Heh. 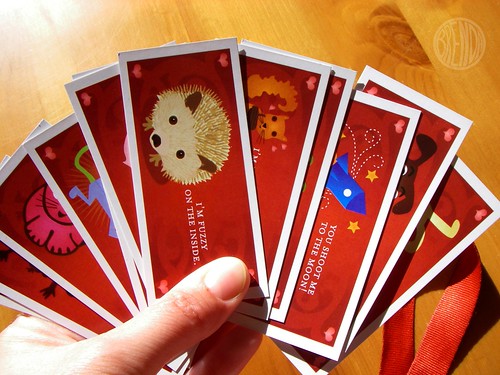 So anyway, these are my valentags! They’re five bucks in my etsy shop. Flat rate shipping for everybody! Woo Hoo! There are twelve unique designs. I’m throwing in three sets of each so you get 36 cards in all. I’m not sure if I’m going to wrap them in pink tulle and a ribbon or translucent paper bands and a sticker like I did the holiday gift tags. Hopefully, I’ll have a minute tomorrow (while Baby Bug is watching her three hours of morning cartoons) and I’ll quickly take pictures and post them.

Or maybe I won’t. Because…. 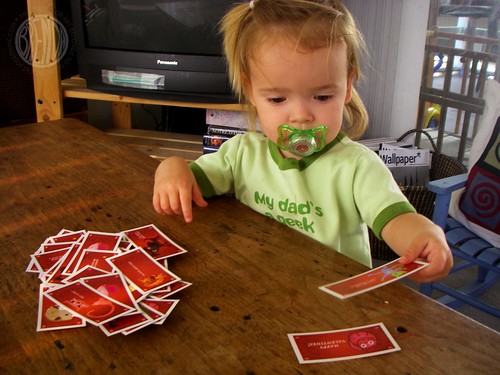 Tomorrow is BABY BUG’S pseudo birthday party! I’m going to make a green cake (or cupcakes, not sure which) and buy some green balloons. Just those two things alone should pack our day with fun. I’m actually not being sarcastic. Baby Bug has practically gone spastic every time we’ve seen balloons in the last few days. It’s going to be great. Especially since the best place to buy balloons around here is the TOY STORE!!! So maybe a toy might accidentally get bought along with the balloons.. it’s her birthday after all!

Then our two relatives will come over and we’ll have pizza and party like it’s 1999! Or until bath time. Nothing kills a party like bath time.