I think I watch this show too much. I desperately want to be Debbie Travis and paint my house into something fabulous. Unfortunately, that’s just not possible since we rent and on top of that we rent from the crazy landlord. We don’t even want to go there. I don’t care how “cheap” paint is.

But that doesn’t mean I can’t paint cardboard boxes. Painting cardboard is fun. The whole process was a lot easier than I ever expected. I walked into Home Depot, showed them the colors I wanted, waited for ten minutes for them to shake it up and nine dollars later I was out the door with my two shades of pinkkkity pink.

Of course cardboard boxes don’t need any prepping or sanding and you can’t tape anything off anyway. All I had to do was tape down my $1.98 plastic drop cloth to our patio floor to keep it from blowing away and we were off to the painting races. It’s a good thing I watch that show because the paint roller was just the thing. It worked perfectly. I probably wouldn’t have known that if I didn’t watch Debbie Travis every morning with Baby Bug.

The only difficult thing about painting the boxes was entertaining Baby Bug. She got tired of being jailed in her exersaucer after about ten minutes. She wanted to paint too. I let her play with a dry brush but she knew the difference. She kept reaching out for the pink and when I got close she would touch the paint splotches on my arm. Who says she doesn’t like pink? Thankfully I was able to finish it up during her afternoon nap. 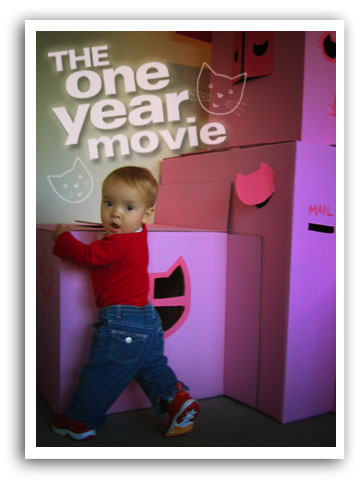 I’ve been meaning to write a post about all the new things Baby Bug is doing. You’ll see she’s found her voice in the movie. She amazes me every day. She’s so smart! I can’t even begin to imagine what year two is going to be like. I feel bad that I’m going to post all about painting cardboard boxes on her birthday and I’m not going on and on about Baby Bug (because believe me I could go on and on…) but it’s late and the heater is broken still and I think my fingers are going to break off if I type any more. So I will save it for yet another few days.