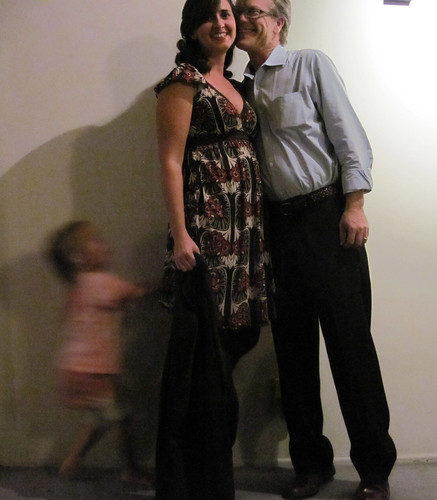 I think it was wishful thinking on my part. I read the invitation, looked at the sparkly star and thought it was a fancy party. All the other holiday parties I’ve ever been to were fancy parties. The wording said it was a “hospitality” party and hell if I know what that means. I just assumed it was the regular deal, you know champagne, valet parking, maybe a gift bag…

Apparently it does not mean fancy party. It means an open house with the whole city of Laguna Beach cramming into a tiny building, drinking sangria and there are kids running around with juice boxes. THERE WERE KIDS THERE WITH JUICE BOXES! What?!! If only I had known! I could have worn jeans and brought Bug. Sheesh! Toby sort of had a hunch it wasn’t a fancy party but you know how well husbands communicate with their wives, speaking Martian and such.

I had been fretting about the party all day in that good sort of happy-excited way. I found an old dress that I had forgotten about in my closet. I love this dress. It’s covered with dark blue sequins that change colors in the light. It flows like a flapper dress and it’s loads of fun to dance in. This dress has danced on many many dance floors and it has never done me wrong. The thing is, I haven’t worn it since 1998 or something. What? It’s a classic! 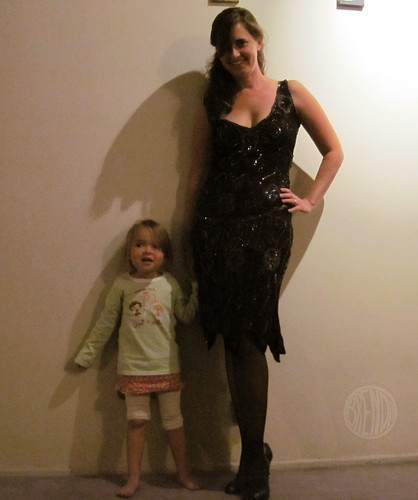 I tried it on and it still fit! So I found my fanciest stockings, put on my murderous feet-eating high heels and donned my old fancy dress. Then I waited for Toby to get out of the shower so I could wow him with how I STILL fit my old fancy dress.

He laughed at me and told me to go change. He said I looked pretty but that my dress was way too fancy. I was so heart broken. I really wanted to wear that dress. Whatever. So I put on my other dress (that I wear to every single shindig since 2008) and we were good to go. I kept my fancy murderous feet-eating high heels on. 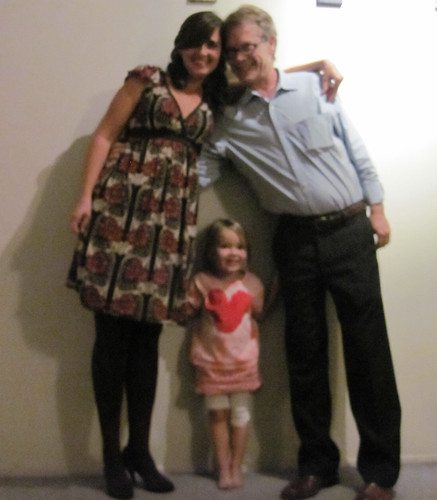 When we got there, there was no valet parking. There was no parking at all!! The whole town was out and traffic was INSANE. Traffic in Laguna Beach is always bad but tonight it was like Mardi Gras. We parked about a mile away from the party and walked.

You can guess about how long I lasted in my murderous feet-eating high heels on a mile long hike down hill. About a block. Then I chucked those heels into my purse and walked the rest of the way in my tights. Good thing I decided to wear thick winter tights and not the sparkly nylons.

I don’t know how all you other girls walk in heels but my feet just cannot do it. I’m thinking it’s because I have super high arches and only the ball and heel of my foot actually touch my shoe. No amount of insoles can help me. Usually, I just deal but these shoes were designed by the devil. They make me feel like I’m walking on wooden stilt toe shoes. Maybe it’s just me.

By the time we ended up at the cram-packed office open-house party I was pretty much over the whole deal and wishing I was at home asleep. We milled around the crowd for about twenty minutes. Neither Toby nor I knew anybody except the man who was throwing the party and after we said our polite hellos, we decided to bail. I don’t think anyone noticed.

I really wanted to go see New Moon (I still haven’t seen it) but we were twenty minutes into the show and I really want to see the whole movie no matter how bad the critics say it is. Finally, I remembered that we had a gift card to a fancy seafood restaurant. Someone gave it to us for Christmas last year but we’ve never used it because I hate fish. But it would be perfect for getting a drink at the bar and maybe desert.

When we got there it was packed. Man, it’s been a long time since I’ve been out past 8 pm. Where do all these people come from? We were going to give up on the cocktail idea but just as we were driving past the entrance a parking spot opened up right up front. It was like it was divine intervention. We had a babysitter, we had a gift card, there was a front row parking spot… How could it go wrong?

Well, there was a 45 minute wait to get a table. I thought that was too long but Toby thought the hostess was probably over-estimating. We sat in the car and talked for thirty minutes. We watched everyone come and go in their fancy going-out attire. It was the best date ever.

Then we got a table. I ordered a yummy artichoke appetizer, Toby ordered some giant jumbo prawns that looked like they were doing the Shamu wave and we topped it off with two whiskey sours. It was lovely. The candle light flickered. I felt like a girl in love.

No really, I did. It was really nice. You have no idea. We NEVER do this. I know everyone is going to say we need to do this monthly or weekly but I’m not getting my hopes up. I’ve been down that road before and it’s not worth it. I’m happy with my workable marriage.

I’m just happy it happened. I think it was better than a fancy party.