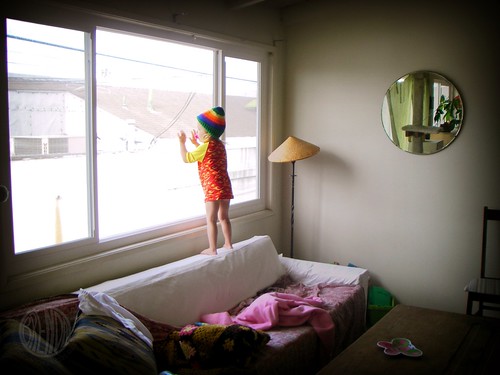 I think it’s time for a Baby Bug update. I have no idea when I last posted one outside of our daily adventures but there are a few things that people have asked about that I should address in a post.

First is potty-training. I guess I never really posted about it because it was just such a non-event. Weird, I know, but that’s really how it happened. I was so afraid of potty-training that I just waited forever to actually do it. We had all the necessary accessories: the little green potty, the Dora potty seat, a step stool, books about potty-training, pretty panties…we had it all but it was sort of in her court. If she felt like going potty, she could. I personally was not into it. To me diapers seemed a lot easier than cleaning up pee off the couch.

Then the day after she turned three a lightning bolt struck me in the head and I said, “That’s it! Panties from here on out. Accidents be damned!” Mostly I was just embarrassed to still be taking photos of her in diapers. I’m shallow like that and I could hear the people in my head making jokes about my redneck kid. So that was that. It was more about me being ready than her being ready. I think she could have trained a lot earlier but who knows.

I think we had about three days of accidents all over the house and then it just clicked with her. She runs off and uses the potty without even telling me now, which is nice and then sometimes not so nice when I discover a mountain of toilet paper in the bathroom and splatters all over the floor. She still uses pull-ups for naps and bedtime but I’m sure we can phase them out pretty soon.

We did use the potty chart I posted here at first but it got to be a nuisance after a while with the taking-forever-to-pick-a-sticker routine and the let’s-make-potty-time-a-super-fun-party-while-Daddy-tries-to-work-in-his-office-right-next-door antics. So when she forgot about it, I didn’t remind her and now the chart is mysteriously gone. She’s asked for candy a few times for going potty but she asks for candy every five minutes anyway. We’re using it as a “teachable moment” and learning all about the word “no.”

So that’s that. I have no secrets in the potty-training department. I’d have to say my best advice is to put it off so long that your kid pretty much trains herself. 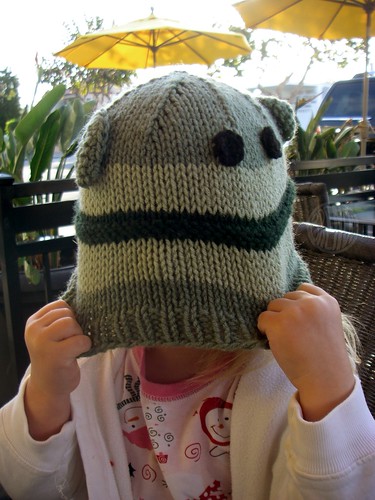 Next up: School. I never thought I’d sign her up for a second session of preschool but I have. In fact, it’s the best thing. She only goes one day a week still and I feel like that is perfect for us. I get some much-needed down time and she gets to go to school and hang out with all her friends. She loves school now.

When the last session ended I asked a friend of mine whose mom works for the school if Bug could possibly be moved up to the next class. I know a lot of you felt like maybe Bug was over-stimulated and that caused her tiredness and subsequent melt-downs but I had the feeling it was the opposite.

We deal with a lot of chaos in our life (like visiting Camp Chaos regularly) and school seemed to be way on the other end of that spectrum. I thought maybe she was bored. Since a lot of the kids in her old class were much younger than her and way less talkative, I had a feeling that she was seeking out her teachers’ attention via crying and carrying on. That’s what she does with me anyway.

I guessed right because now that she is in the older kids’ class, she is happy as a clam. She follows the other kids around and adores her teachers. I’m so happy too. She comes home with new songs and funny crafts. I think they do a lot in the next class up and that is a good thing. Or maybe she just got used to it and realizes that crying isn’t going to get me to come rescue her. Either way I think preschool is here to stay. 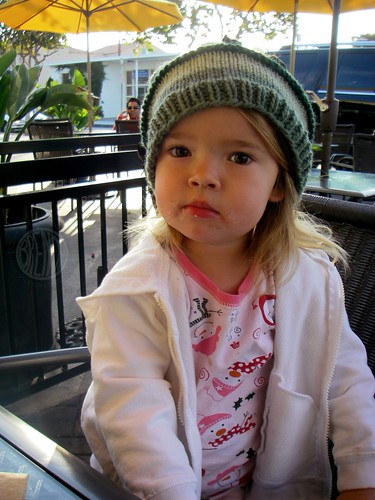 What else…I think that’s pretty much it. We just do our daily routines and try to adjust when things change. She’s slowly giving up her one nap a day but I knew that was coming. On days that she skips, I look forward to an early bedtime, which is nice.

As many of you know, I co-sleep with Bug (Yes, I still do. The horror!) and my biggest problem is that when I put her down at night, I often (like 100% of the time) fall asleep too. I try to stay awake. I count to one hundred, I pray for everybody I can think of, I write blog posts in my head…I do it all but nothing works. I always fall asleep. Setting an alarm for myself is no hope either because when I do fall asleep, it’s a deep sleep and waking me up in that first REM cycle is like trying to swim from the bottom of the ocean to the top. I can’t even stand up straight. What can I say, I’m a morning person. I do not do nights well.

That said, I don’t really want to go to bed at eight o’clock either. I’m granny, but not that granny. I have to get my laptop time in sometime. So on those days that she skips her nap, and I’m missing my laptop like it’s air to breathe, I’m very happy because she takes about seven seconds to fall asleep at night and I magically stay awake. Of course, I’m still sort of a dud by then and spend most of my late-night hours cruising the net and getting nothing done but at least I still feel like I have some time to myself. Otherwise I think I would go insane.

I know at some point I will just have to close the door and say, “Sorry kid. It’s time for bed,” and that will be that. I also intend to enforce some “quiet time” during the day where she will have to stay in her room and read books or something. But I’m still a weenie about enforcing that. Also, I still really like cuddling with her.