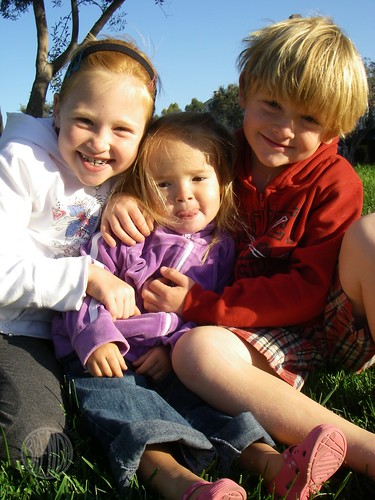 I babysat the kids I always babysit last night and for a change I decided to take over a craft for us to do together. They love crafts. Usually we end up making things with their mother’s office supplies that consist of post-it notes, straws, paper plates, staples and tape. I’m creative but even I have trouble coming up with hours of fun with those meager supplies. Believe me, we’ve pretty much exhausted them.

I decided it would be really fun to make picture frames out of cardboard and seashell bits. They live right on the beach so I thought this would make a perfect gift for them to give to their grandmother. We could make them refrigerator magnets. How sweet, right?

They thought it was a dumb idea. I guess five- and six-year-olds are way too cool for fridge magnets. Phooey. They wanted to make goblins and ghosts out of post-it notes and stick them to all the door handles in the house. That’s fun too but not really what I had in mind. Then the five-year-old started drawing droplets of blood in red marker and posting them down the wall. He was rattling on about how scared his parents were going to be when they came home at 2 o’clock in the morning and saw that someone had been murdered in the hallway via post-it note. Somebody’s been watching too many Scooby-Doo movies, I think.

So I had pull out the big guns. And by big guns I mean my evil friend Mr. GLUE GUN. 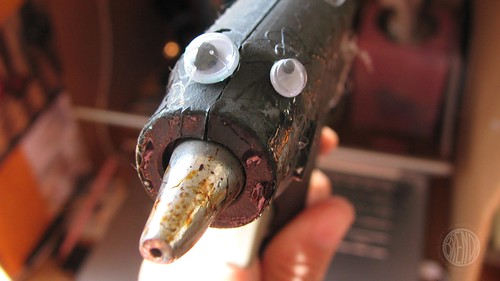 A little side note about glue guns: I love glue guns. They are my favorite tool to use for gluing. Quick, fast, dangerous and dirty. We could have used some sort of wood glue or paste but the hold is just so, how do you say…half-assed, you know? When you’re positioning something somewhat heavy onto something that is going to end up vertical, you really need a glue that is going to set fast and well OR you need a lot of time on your hands to let the not-so-sticky glue sit around and dry for days and days. Who’s got time for that? Not me. Not five-, six- and two-year-olds either.

But that’s not really where this story was going. I decided to break out the glue gun because I knew it was something exciting that would capture the imagination of my young post-it note terrorist. He’s a boy. Boys like guns. Sure enough, the minute the glue started to drop, he was there like a fly on a piece of poop. I had no intention of letting him use the glue gun because that would just be irresponsible. What am I going to do next time? Bring a nail gun? Yeah. That wasn’t going to happen. Except he started whining and bouncing off the walls like boys do. He had every argument in the book to prove why he was capable of using a glue gun.

“I’ve used them thousands of times,” he said confidently.

Hmm…I thought. Could he be telling the truth? Do they let five-year-olds use glue guns at private school? I never went to private school so I figure they do all sorts of fancy stuff there. They have church on Thursdays and I think they ride horses and play tennis and learn how to make martinis too. That’s where all the sophisticated kids learn those things, right?

And then there’s the part of me that isn’t closed-minded about letting kids use tools before they are “old enough.” I learned to paint at six, with oil paint. It worked out for me. I let Baby Bug use scissors and except that time she cut her bangs, she’s been very good at it. Maybe using a glue gun would work out for the post-it-note terrorist. Maybe he’s so crazy and bouncy because he’s not challenged enough or something.

Or maybe I’m just stupid and should probably be fired as a babysitter.

I let him use it.

Right on the inner part of his arm where it bends. You know that tender part that has no callouses? I felt so bad. He was wailing and moaning and bouncing off the walls. (That’s what he does. Ask me about the time I took him to Starbucks and he climbed up on that little shelf where they set the drinks.) We put ice on it, we put a cool towel on it. Nothing really made it feel better. Thankfully it was a very tiny burn and after 30 minutes or so he finally forgot about it.

I didn’t. Lesson learned: kids should not use glue guns until they are able to sustain great amounts of pain without crying. I think I’m barely old enough actually because right after he burned himself, I burned myself on the thumb and it hurt like a bunch of really bad words. It still hurts a day later but it’s slowly turning numb. I guess I could go out and get a cold glue gun but that seems like such a wussy thing to do. 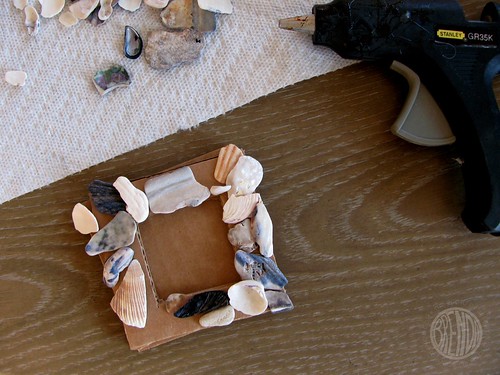 So anyway, this post is sort of supposed to be a craft post as well as a day-in the-life-of-Bug-and-SAJ post so maybe you want to know how to make your own seashell picture frames. It’s easy really. You don’t have to use sea shells. You can make a frame with anything glue-able. Rocks, cheerios, dry alphabet pasta, beads, buttons…pretty much anything you want. 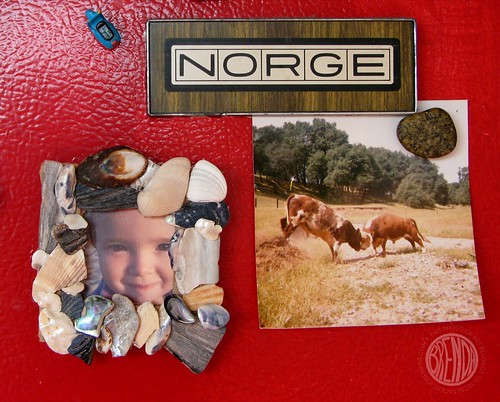 We’ve been collecting small broken pieces of shells for a long time so I thought this would be fun. Toby thought it was a little bit busy for a picture frame but I think he’s just a stuffy old man with no imagination. He does have a point though so I tried to use a photo that was just Bug’s face and not a lot of background detail going on. 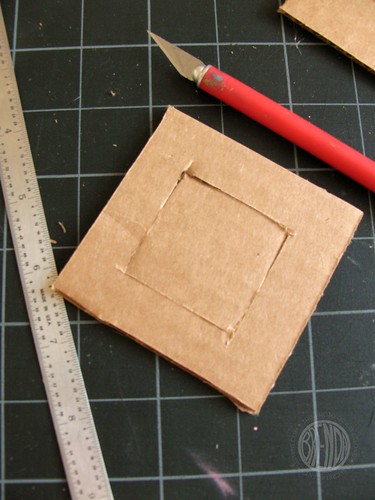 All you do is cut two pieces of cardboard the same size. I cut mine three inches by three inches because I’m partial to squares. Then cut a small square (or rectangle if you’re making a rectangle frame) into the top piece. An exacto knife will do the trick. Glue your shells (or beads or whatever) onto that top piece, place your photo between the two, glue them together, glue a magnet to the back and tah-dah! You’re done. Easy-peasy. If you are five, do not use a glue gun. Ask your mom to do it for you. Or use some other kind of glue and take your time. 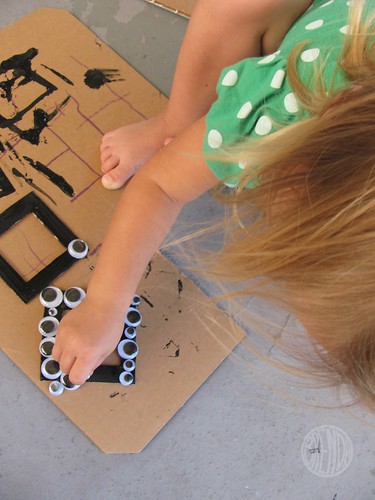 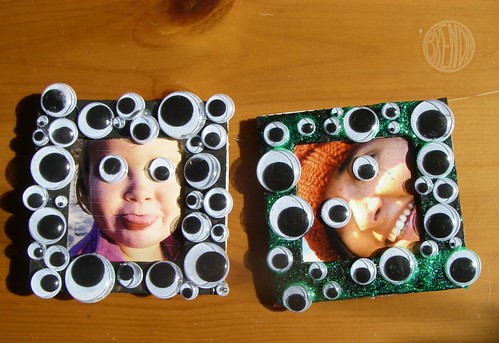