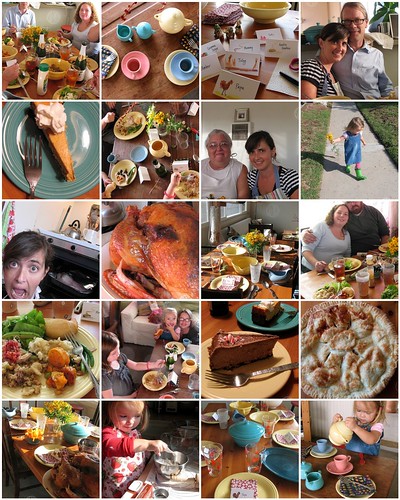 Our belated Thanksgiving is officially over. It went pretty well. Now I’m going to bed of a broken back. Maybe I’ll live to tell about it tomorrow. 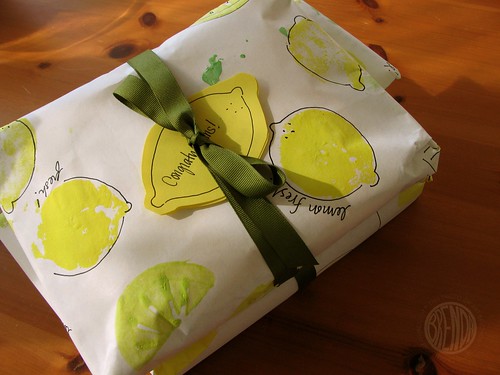 Here is something fun that Bug and I did together the other day. That’s my secret, you know. That’s how I get stuff done when she is awake. I force her to help me. Actually, it’s more like I rack my brain all day long for things that we can do together so that I can actually cross something off my list and not go insane at the same time. I get very bored of playing picnic and watching Dora all day long. I think boredom brings out the creativity in me. That might be a good explanation for why having kids can be so inspiring for creative moms and why we all feel like we are going insane because there is never enough time to do everything we want to do! But if we didn’t have the kids we’d never have all the ideas so it’s a catch-22!! 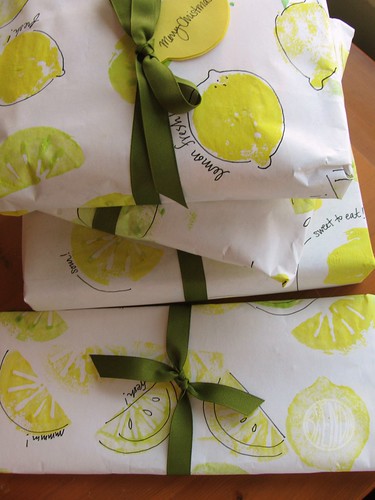 We made wrapping paper! We’ve done this lots of times before, with crayons and potato stamps…but this wrapping paper was made especially for some people on my gift-giving list who like lemons. It’s not exactly the most Christmas-y paper but it does fit the recipient. I really wish I had some bright yellow cheery ribbon to go with it but I refuse to go shop for any. I’m going to do as much of my holiday gift-making/shopping at home as possible. Long live Etsy! 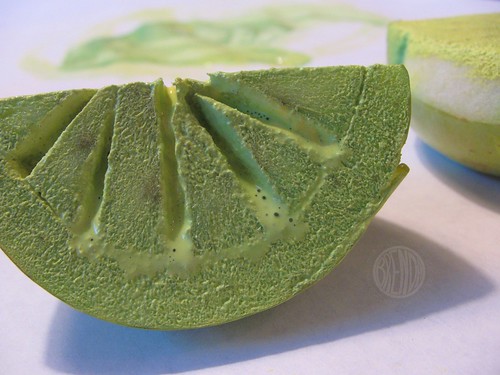 You can do this too if you are so inclined. I just carved two lemon shapes out of some apples we had (we didn’t have any potatoes so apples did just fine in a pinch). One of the shapes is a lemon slice and the other is an oval with those characteristic lemon bumps on both ends. (Though I think in real life lemons don’t actually come in that shape that often…but whatever, it’s all about recognition and I’m not going to get all Norman Rockwell while carving an apple.) It is sort of funny that no citrus fruits were harmed while making this paper. Just apples. 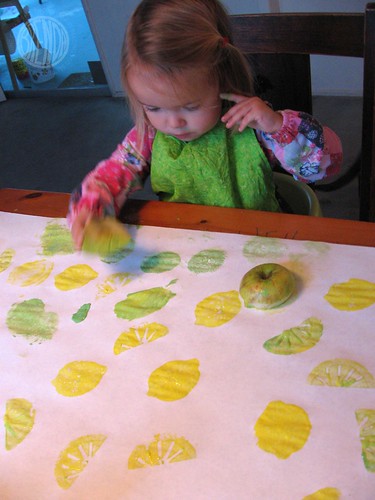 We stamped the crap out of those apples. Too bad poster paint isn’t edible because those apples were ready to be applesauce by the time we were done. It was pretty fun. The perfect craft a two-year-old attention span. After she was done slapping the paper with apples we hung it out to dry on our handy dandy patio lighting. 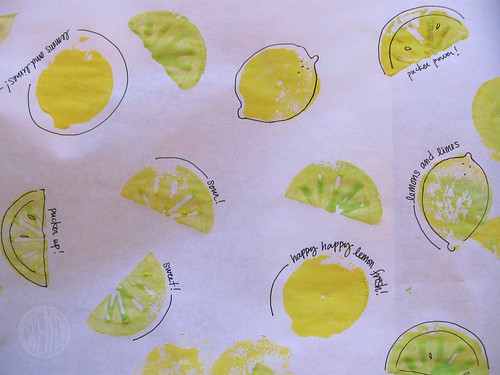 And then, me being me, I had to add something. The paper was perfectly cute with just lemon stamps and the odd kid thumb print here and there but my black roller ball pen was calling my name and the next thing I knew I was scrawling silly phrases about lemons. I think it turned out cute. I gave one present to a friend already (her wedding was last week so it was a late wedding gift) and she wadded up the paper right away not even realizing it was homemade. Then when I told her, she shrieked and un-wadded it right away. So you could say that the paper looked so good it looked store-bought, or maybe you could say that it looked like something to throw away. Haha. I’m going with the former, of course.

So there you have it. Homemade lemon paper. 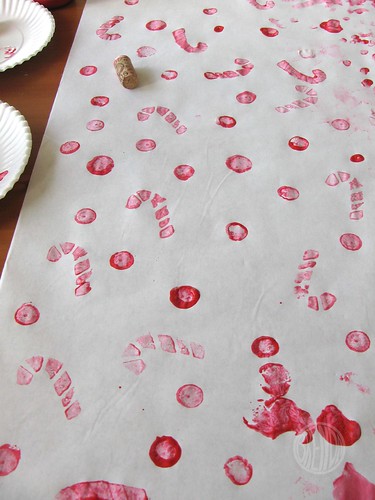 We also made some Christmas paper from candy canes carved out of apples but by then Bug’s attention span had flitted off to something else and she started finger-printing my beautiful paper like some kind of murder happened. So I shooed her away and finished it up by myself. 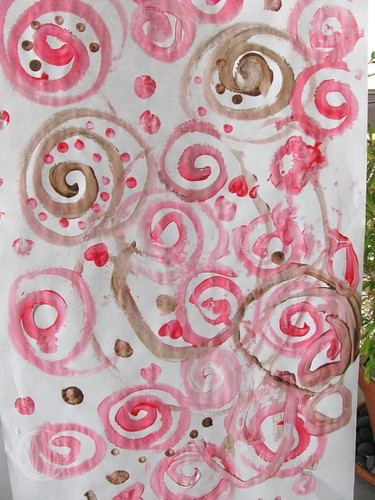 I tried to tell Toby that Bug made the paper but he was onto me. So I guess this 100% kid art was made by a 100% 36-year-old kid. I still like it and I think everyone getting a gift from me in this paper will like it too. I may or may not clarify who did the painting. We’ll just say that Bug helped in her own way. And she did! See that massacre of red fingerprints attacking my nice cinnamon bun swirls? That was all her. 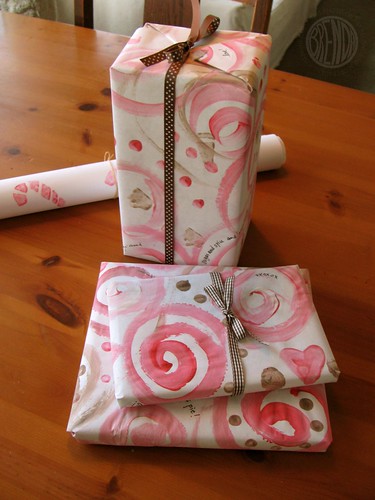 Wrapping paper with a story is always better anyway.