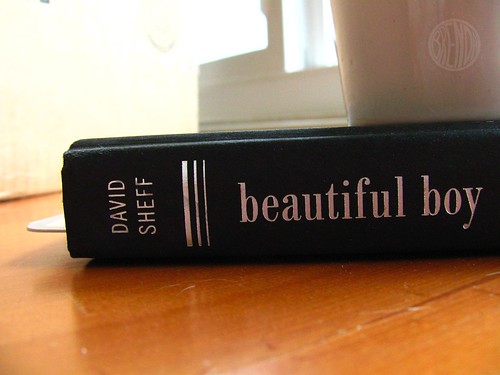 I just finished Beautiful Boy by David Sheff and it has left me deep in thought. This was a great book for me right now. I don’t know if it would have the same effect on the next person or even if it would have touched me as deeply if I had read it a year ago. It was just the right thing to read at the right time.

Here I am on day two of trying to punch out this blog post and I wonder if I can even manage to string two words together. Good books do that to me. I love good writing but when I read good writing I catch myself overthinking my own words that fall so far short of what I have just read. So you’ll have to either skip over the rest of this post and read the book yourself or humor me as I feebly try to explain why it meant so much to me.

This book has changed the way I think about addiction. And that means a lot because the subject of addiction has been a life-long puzzle to me. I just didn’t understand it. I’ve never been addicted to drugs myself. I’m “addicted” to sugar and food and even the internet. But I don’t understand what it is like to have my brain chemically altered in such a way that I will continue to make bad choices even against my own best wishes.

I’ve been paranoid about drugs since the day my dad sat me down and told me about these Mickey-Mouse stamps that have LSD on the back. I used to have nightmares about going to junior high and being pushed up against a chain-link fence by some scary kid with a black mohawk and being forced to lick stamps. What a funny visual that is. I actually used to have heart palpitations when a kid that I labeled “a bad kid” would walk into the same room. Maybe my dad scared me straight. Maybe I’m just a freak. Whatever it is, this has been a subject I’ve almost been obsessed with.

As you know my mother-in-law is an addict. She is an alcoholic and has been on a painful downward spiral for the past six months. I didn’t think she was going to make it out alive this time but she proved me wrong again. I never know. That’s the hardest part I think, just not ever knowing. When to trust her. When is she lying? When is she not? When to help her? When to not?

I think the biggest thing I learned from this book is that addiction is a disease after all. I NEVER believed that before. How dare my mother-in-law slide into the same category as someone with cancer or multiple sclerosis? People with diseases don’t choose to get sick. They don’t try to kill themselves over and over and hurt their family members in the process. It was preposterous to me.

David Sheff does his research. He is very thorough. His son is a meth addict and he goes to the ends of the earth to understand the drug and what it has done to his son. He actually looks at brain scans and sees how the brain is altered after that first usage of drugs.

I think I can get my head around that. That doesn’t mean I feel sorry for my mother-in-law but I can understand that her decisions are made through a filter. Her brain is predisposed to do whatever it takes to keep that dopamine pumping. Forgive me if I get the technical terms wrong. I read that stuff and it makes perfect sense but the scientific terms run out my ear and are never contained in my memory. All I know is that there is a scientific explanation for my mother-in-law’s behavior. She isn’t off the hook totally but her behavior is predictable. Which is crazy since “predictable” is not usually a word I would use to describe her.

I do know Baby Bug though. I may have to erase this post someday because I’m terribly afraid of her reading it and I want to protect her from my fears as long as I can. Worst of all worst-case scenarios, I don’t want to cause a self-fulfilling prophesy. I feel so terrible even admitting this to you guys that I think these things but often I stare at her and feel like crying because I’m so afraid that she is going to inherit this addictive gene and will someday be in a gutter addicted to meth. Meth addiction is my greatest fear.

Toby assures me that we are giving Baby Bug the best possible childhood and she has every chance in the world to grow up happy and healthy. Usually children that become addicted to drugs or alcohol have a gaping hole in their heart. Something terrible happened to them at young age that causes them pain and they cannot develop normally because of it. I don’t plan on ripping a hole in Baby Bug’s life. In fact I am going to do everything I can to make sure there will never be any holes at all. But you can’t control these things. Sometimes kids from perfectly healthy homes get addicted to drugs.

I’m just a mom and I worry. I am a worrywart.

Reading this book has given me some relief from my endless worrying. There are signs I can look for. There are actions I can take. It’s good to talk to your kids about drugs early and often, Sheff says. Of course we knew that. But it isn’t good to talk about your own experiences with drugs. Often kids will interpret your survival as a go-ahead. If my mom did it and turned out okay, then I can too sort of thing. I didn’t know that.

Mostly what I take away from Sheff’s book is that addiction isn’t the end of your relationship with your child. Sheff still has a relationship with his son. I don’t know if his son is still sober but at the time the book was published, he was. I’ve heard since that they even do press conferences together. This gives me hope. I don’t mean to be a pessimist. I one-hundred-percent expect Baby Bug to be like me and never even try the stuff… but part of me wants to be prepared for the worst. Part of me doesn’t want to be broadsided.

Sheff also explains that it is so important to take care of each other when you are dealing with an addict. Toby and I know that firsthand. Toby has been through so many ordeals with his mother, you’d think he would be an expert at dealing with it, but it still takes its toll every time. He tries to push it out of his mind and carry on but he tells me that his work suffers. He has a hard time concentrating.

I know I have a hard time being my happy cheerful self when his mom is drinking. I’m constantly waiting for the phone calls. Constantly watching the caller ID to make sure I don’t pick up the phone for another social worker who is going to sucker me into feeling guilty for something I am not guilty of.

I don’t have a solution for these problems but I do have some tools. It does help to listen to other people’s stories. It’s a huge problem and so many people are going through it. There is some strength in that. We are not alone even though at times we feel so incredibly alone. I personally haven’t had much luck with Al-Anon but I know it’s there.

Maybe I can stop looking at Baby Bug and imagining her shooting up. I can still hold her close but I won’t be crying because I see her with sunken eyes and sores all over her legs. I’m scary like that. I scare the crap out of myself. I hope she never knows the extent of my imagination and my fear for her. I’m sure she will cause me great worry for many many years. My mom says she still stays up at night worrying about my brother and I and we are in our thirties. I guess it’s something that never goes away.

I don’t mean to be all doom and gloom. I finished this book feeling uplifted. Comforted that there are other parents out there who do not give up on their children. My life may be hell if I have to go through this but for Sheff it paid off that he didn’t give up on his son. This comforts me.

Baby Bug isn’t going to be my mother-in-law. She has me.