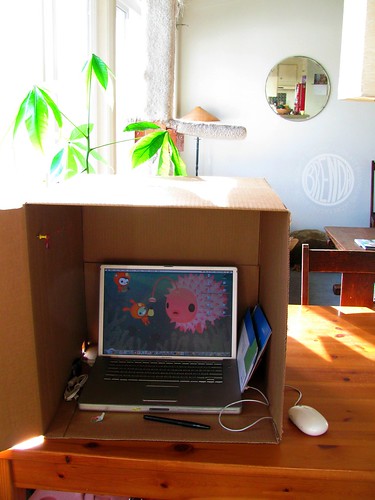 I got a new office box today and I think it is post-worthy. I had to give my old one to the kitten. My office box rocks. It really does. I just love it. I could write a poem to my box. Maybe I will.

Okay that’s enough. I was channeling this book but you probably haven’t read that book so the cadence is lost on you. Not a big deal. What is a big deal is my box.

Why is it so wonderful? A lot of reasons. Mostly because it is allowing me to be soooo productive. I love working in my box. When I stick my head in there, it’s like I become Robo-Designer. I work work work and hardly ever goof off. I’m still swamped and there is no hope in sight that I will ever catch up but I feel just the tiniest bit of control over my freelance work load. And believe me, that is a good thing.

It might just be the natural rhythm of things. Maybe it’s normal for me to go through cycles of frustration and then after the lows, feel exceptionally happy and productive. Maybe I just have to learn how to roll with a toddler’s schedule that changes every three months or so. Maybe I’m just not pms-ing for a change. Or maybe it really is the box. I’m just happy right now. I have a routine. I get about two hours of box time a day and that makes me happy.

I also have started a public list. I’m not going to link it here because even though I write in secret code, I don’t know if all my clients want the whole wide internet to know what I’m doing for them. But I’ll just say that if you poke around on this page, you’ll find it. It’s nothing really. Just a short quick list of what I’m working on in May and then June and then July. But this list has changed my life.

It’s silly really. I’ve always had lists. I have paper lists and electronic lists and two calendars to keep track of my life. Why does this public list on the internet work so much better for me than all of those others? I think because it is always there. It never gets lost or forgotten to be turned on (like that other list program I have on my computer) and it’s public. I know you guys are looking at it and it forces me to stay in gear. It holds me accountable. I love it.

So between my office box and my new public list, I am 100% more productive. It’s the best feeling in the world. It also could help that Baby Bug has been taking three hour naps lately. She must be growing. That said, I better appreciate this productiveness while it lasts because nap changes, pms and other naturally-occurring catastrophes are always around the corner.

In the meantime, I’ll just sing my happy box song.

p.s. It has been brought to my attention that the word “box” is sometimes used to refer to something else. That was not my intention at all. Please get your mind out of the gutter, Bethany. 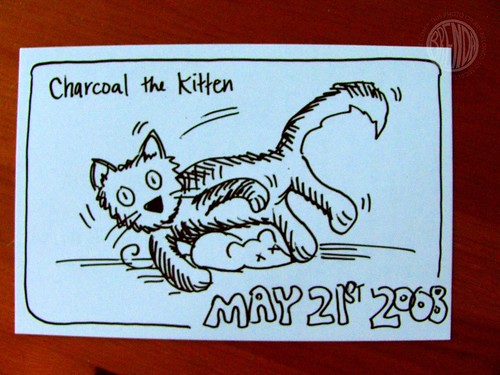 Hopefully the title of this post will keep away the faint of stomach.

Two trips to the vet later and I think Charcoal is on his way to being worm-free. Yes, he had worms! Ew, ew, EW! I don’t even know how many different kinds of worms he has. I could go into some description but I think you all would lose your lunch. I nearly did.

How could such cute soft cuddliness be marred by something so completely disgusting? There is nothing like picking up a ball of fluff, bringing it close to your face for some loving and then seeing something wiggly and white hanging off that cute little rat tail. And no, it’s not rice.

I guess I shouldn’t have been surprised. Apparently most kittens are born with worms and it’s just part of the process. How I managed to not know this as a self-proclaimed crazy cat lady, I do not know.

So I turned into OCD woman and cleaned everything in sight. I cleaned the cat carrier out with bleach, threw out the cat litter and the cat box (it wasn’t worth cleaning) and packed Charcoal off to our favorite friendly cheap cat clinic. They gave him a bunch of shots and I was on my way.

Until I got home. Then everything went haywire. I don’t think I shared the story of the dead pigeon in our alley but it has tainted our view of wild animals. A while back, maybe a year ago, a pigeon got run over in the alley that runs right by the front of our house. (The alley is pretty much our front yard since we live in the concrete jungle.) Upon closer inspection of the pigeon, we discovered it was infested with worms.

Worms like spaghetti poured ourt of its innards. It was the grossest thing I’ve ever seen. I will never look at a pigeon the same way again. No wonder they fly right into cars sometimes. They are being eaten alive by worms inside them.

When I light-heartedly told Toby that I had just taken the kitten to the vet to be de-wormed (as if this is something that we do all the time) it didn’t come out as breezily as I intended. Toby didn’t get mad or anything but I could tell I was in the doghouse again. First for bringing home a kitten without asking and then for bringing home a kitten with worms. Wiggly disgusting worms that we all have nightmares about ever since The Great Pigeon Incident.

Toby asked me what kind of worms Charcoal had and I honestly didn’t know. How many kinds of worms are there? Apparently a lot. Some are even dangerous to humans. I called up the vet to find out. They didn’t know either. They would have to check the results and call me back.

Ten minutes later they called back with the urgent message that I needed to bring Charcoal back in immediately. He has tapeworms. They also told me to keep my toddler, who was rubbing her pacifier along the kitten’s back affectionately, away from the infected kitten. Crappity crap crap! The woman on the phone said something about getting a tapeworm egg in Baby Bug’s eye and something horrible horrible horrible that I blocked out.

I hung up the phone, shuddered a little bit and then piled everybody back in the car for a second visit to the vet. Joy joy joy. Lunchtime and naptime be damned, we are getting rid of these worms before we all die a horrible death and have spaghetti worms coming out of our orifices.

It turns out the woman on the phone just wanted to freak me out for no reason. You can get tapeworm by rubbing a tape worm egg in your eye but it’s pretty rare. You pretty much have to eat kitten poop to be infected with tapeworm. Thankfully, Baby Bug seems to be past that stage. Once in a while she will sneak a bit of cat kibble but she leaves the cat box alone.

While we were at the vet waiting and waiting and waiting, something interesting did happen. Wonderfully, that something was not Baby Bug having a temper tantrum like last time. Some woman, who in my book has to be the stupidest cat owner I have ever come across, brought her very large cat in without a cat carrier.

Actually, she didn’t make it to the clinic waiting room. We saw her struggling with a large furry blur of orange and the next thing we knew the large blur was bolting past the office windows and into the industrial park parking lot—not a very good place for a cat to be bolting. The woman ran after him shrieking, “Kiwi!” and waving her arms like a lunatic. There was no way this woman was going to catch her cat. Then she started clapping. I guess in her bizarre world her cat comes to the sound of clapping. In my world, my cats run from loud noises. Especially when they are scared and hiding under strange automobiles.

So being the lunatic that I am, I hoisted Baby Bug onto my hip and went lumbering after Kiwi the running orange cat. We chased him from one end of the parking lot to the other. There were a few times I was even afraid he was going to leave the parking lot and run across the very busy street in front of the clinic. Thankfully, Kiwi seemed to know not to do that.

But what really got me irked at the crazy woman was that just when I thought I might be able to sneak up on him kindly, saying something softly like “Here kitty kitty kitty,” this woman would run up yelling and clapping and being all sorts of crazy. Over and over she would scare him away.

Even when one of the clinic employees came out with a net, Kiwi couldn’t be caught because of his crazy owner. Maybe she didn’t deserve to own a cat and should lose Kiwi…but still, losing a cat in an office industrial park is pretty sad. There were cars everywhere and it would be pretty bleak for him to find food and shelter.

Amazingly, as Kiwi was bolting past another office window, a woman in scrubs came out and caught him. She had the sense to corner him behind some bushes and then just pick him up before the crazy owner could scare him away again. I don’t know why I didn’t think of that but it might have been partly that I was running all over the place with a KID on my hip. Running while carrying a toddler does lessen your stealthiness some.

So that was the end of the escaping cat story. Kiwi safely made it to the clinic but then we found out later he was scheduled to be neutered that day. Poor cat.

Charcoal got his second shot and some flea medicine and is on his way to a happy healthy kittenhood. In about two weeks we will get over our phobia of worms and all will be well again. 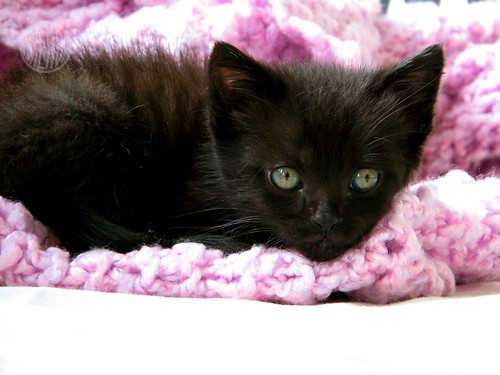 Anybody still want a kitten?