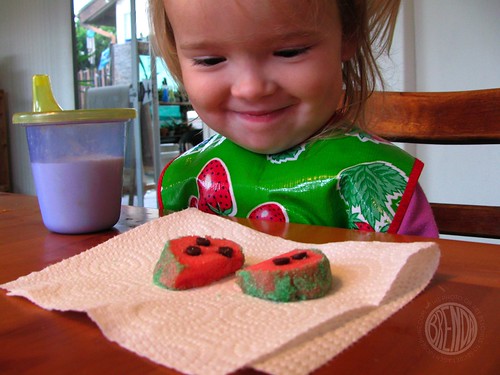 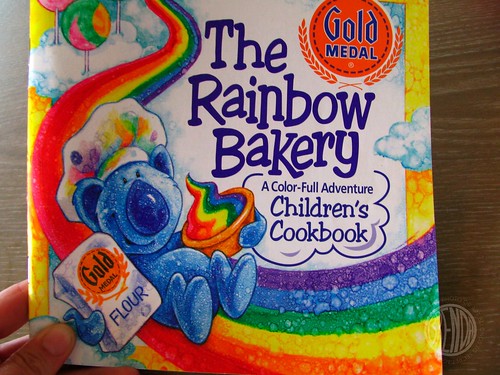 First, I pulled out this little cookbook that I mailed away for years ago when I was the super duper babysitter. This book is the best. The kids I baby-sat still ask for it when I come to visit. It was a buck or two back then but you can order one here for $3.99. Still worth it, I think, for the illustrations alone.

The kids love looking at the pictures. Baby Bug and I sat down with it and talked about monkeys and splashing and blueberry banana bread for a good ten minutes. It was great. We were all set to make blueberry banana bread (which I was heavily influencing since I have some very overripe bananas) until I realized I only had two bananas and you need three or four. Bah humbug. 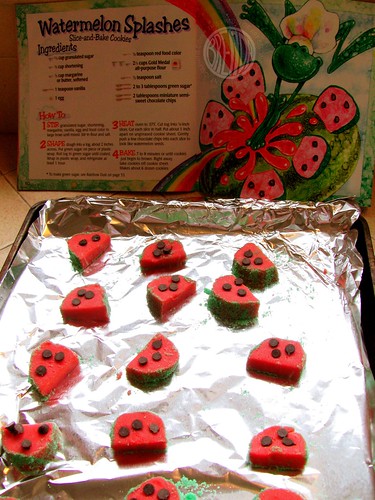 So I let her pick another recipe. Watermelon splashers it was. I think she might have picked it because of the green frog, knowing her. I thought it would be difficult but it was rather easy. Duh, it’s a kids’ cookbook, Brenda. Well, I guess I’m a little less confident in the kitchen than some people.

The best part for Baby Bug was making the green sugar that coats the outside. She LOVED that. All we did was put a half cup of sugar in a sealable bag and then added eight drops of green food coloring. Then Baby Bug got to squish the sugar around with the coloring until it was all green. Good times, I tell you. We could have made colored sugar all day. They had another recipe for making a jar full of rainbow-colored sugar. We might have to do that some other rainy day. 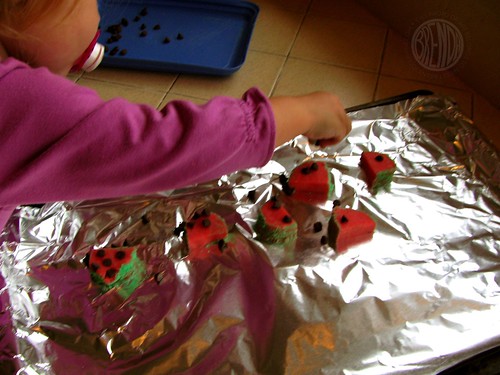 Then we made the red dough, formed it into a long “red snake” (according to Baby Bug) and rolled it in the green sugar. Baby Bug loved rolling the snake. Real dough is SO much more fun than play dough. Then we stuck it in the fridge for an hour to chill. After it was cool, we cut the poor snake into slices and stuck mini-chocolate chips into the slices for seeds. They turned out sooooo cute! 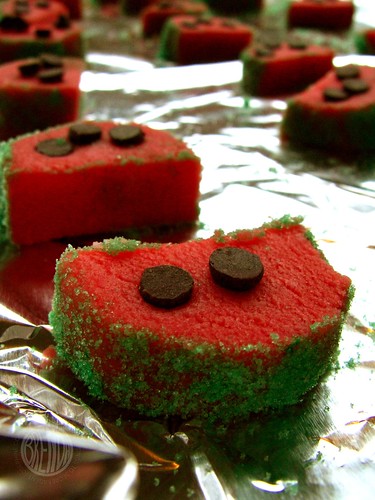 Don’t they look like little mini watermelons? I have such a weakness for mini things. They got me so in the mood for miniature food, I made Baby Bug a mini cheeseburger for dinner… but that’s another subject. I’m getting ahead of myself. 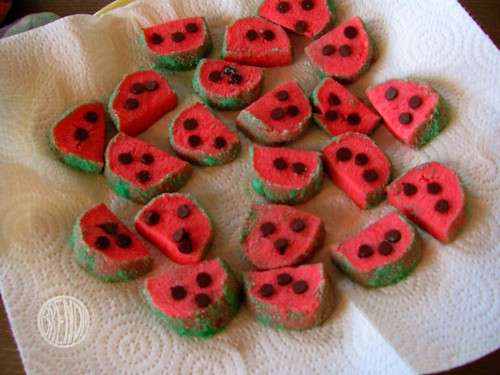 I’m thinking these would be great for a picnic-themed party. How cool would it be to serve these with some ants on a log? Or what if instead of watermelon slices we made little ladybug cookies?!! I could go on and on. And I will when I get my party site up, which is in the works by the way. 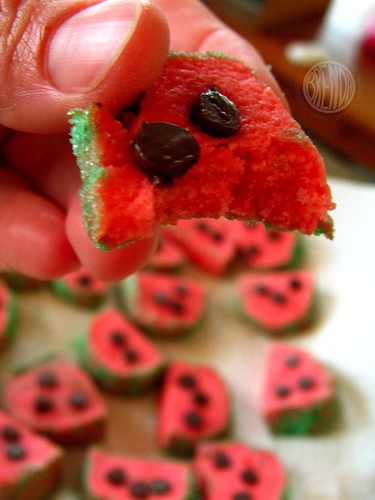 The only thing that bothered me about these adorable little cookies is that they didn’t taste like much. They are yummy and I catch myself wanting to eat nine or ten of them but they don’t have that much taste.

It could be because I was out of shortening and I had to use all butter (while taking out the appropriate amount of salt). I don’t even know what shortening is really. Is that LARD? Ew! Oh well, I’ll trust you bakers on what should have been used. It also could have been because the dough might have been a little over-worked. We might have had just a little too much fun playing with it. Or maybe it’s just a kids’ recipe and not meant to be enjoyed by adults. 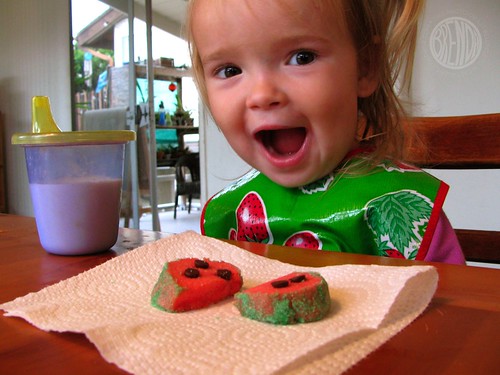 But even Baby Bug didn’t really like them. She liked eating the dough and she made this swell face but she only ate the chocolate chips out of them and left the rest behind. Go figure.

So I challenge all you bakers out there to make these cookies and make them taste good. Maybe they could even taste like watermelon. Now that’s a stretch. I double dog dare you.

Recipe after the jump.
END_OF_DOCUMENT_TOKEN_TO_BE_REPLACED 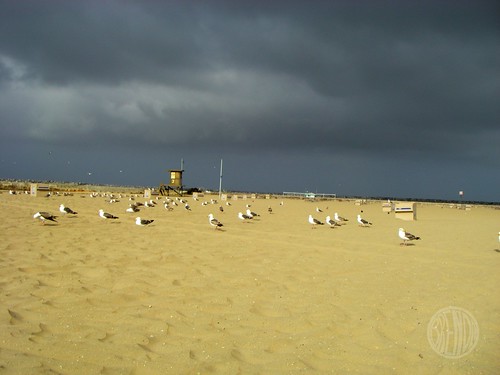 It’s such bad luck to write about how manically happy you are. Singing songs about boxes…such foolishness! Well, you know what happened. A switch flipped in my head and suddenly I was struck with PMS (or something) from hell. That’ll teach me to brag about my office box. Whatever goes up must come down.

Don’t worry, the office box is still rocking. The sun went behind some clouds and a storm moved into my head, that’s all. Thankfully, I have some very good friends who’s feet are firmly grounded in reality and they called me on my crap. I moped a little bit and decided they were right. I know not everyone can kill the blues with a good talk with a good friend but it worked for me…this time. And I am soooooo thankful. I hate falling down that pit of sadness. 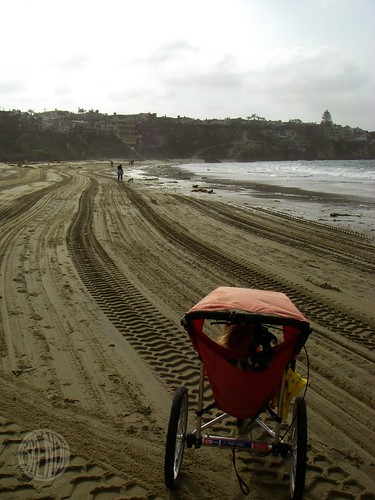 I plodded through the day, faking smiles at all of Baby Bug’s cute and not-so-cute antics.

Let me just take a sidebar on the not-so-cute antics. I’m not complaining here, I just thought I’d share…because I can.

Suddenly out of the complete blue nowhere, Baby Bug has a huge aversion to scratchy seams. She never cared before. She’s not an overly sensitive child. I can yank on her hair pretty hard when I put her ponytail in. She never complains the way I used to when I was a kid. She never complains that the bath water is too hot or too cold. She’s really mild-mannered for a two year old. 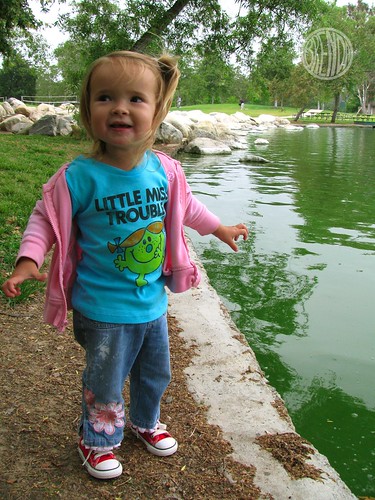 Until lately. Oh my goodness! She will not wear anything that has “scratchy” seams anymore. Of course all the really cute clothes have super scratchy seams. It’s part of some great conspiracy involving Target and Old Navy and children from China sewing with thread made of steel wool for three cents an hour. Or maybe not.

Maybe Baby Bug is just rebelling because I have not jumped on the organic-free-range-vegan-threadless-hairy-armpit bandwagon all my other friends have jumped on. (I’m just teasing you guys!!!) I guess I’ll have to start budgeting for more expensive clothing from now on. Hopefully, it’s just a phase.

The other day she was walking around shirtless again and Toby told her to go put on a shirt. I already knew the battle ahead so I told her to go pick her own shirt out. I figured maybe if she was in charge, we might get somewhere.

She goes in her room and comes out five minutes later wearing her super-soft crocheted blanket her aunt made her wrapped around her middle three times. Apparently, a wrap-around blanket sufficed for a shirt in her book. Whatever. Toby got a kick out of it but I just rolled my eyes. This is the sort of stuff she pulls all day long.

Later in the day she decided her shirt and her pants were too scratchy so she took them off. Five minutes later she decided her diaper was too scratchy and off it came too. Then she ran around the living room screaming, “Naked Baby! Naked Baby!” I allowed it since this is sort of a fun game we play right before bathtime and frankly, I was worn out with her antics. I just wanted to sit on the couch and stare off into space for a minute or two.

She crawled up on the couch next to me. It was nice. Just a few minutes of quietness between the two of us. I sighed. Maybe motherhood isn’t so hard after all, I thought. It’s moments like this that make it all worth it…

AND THEN SHE PEED ON THE COUCH!!!

Oh well. Life goes on. My new couch cover is very easy to remove for washing (because I’m a thinking mom like that and I planned ahead. I know you all thought I was an idiot to sew a couch cover in white but believe me, I had my reasons). I rinsed the cover off and set both the cushion and the cover out on the porch to dry.

Wow. I got so sidetracked on my sidebar, I forgot what I was talking about. 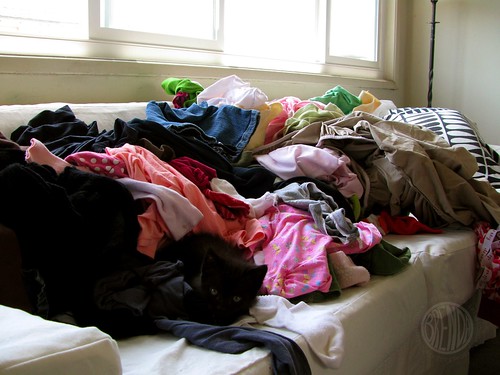 I guess I’ll just finish up by saying it was a pretty blah day with laundry and absolutely no box time, which could be part of the problem. But by the end of it things got much better and Baby Bug and I baked some watermelon cookies!!!! Which I will write about in my next post.

In the meantime, I’ll just leave you with this photo: 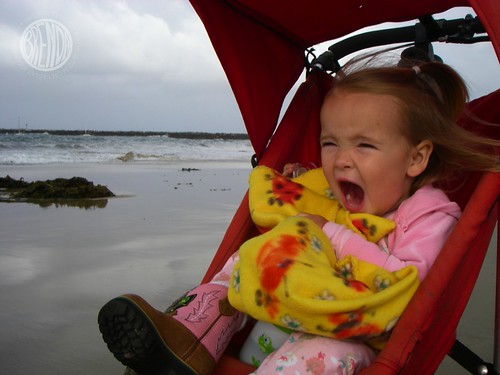 When the weather gets you down, just yell at it!