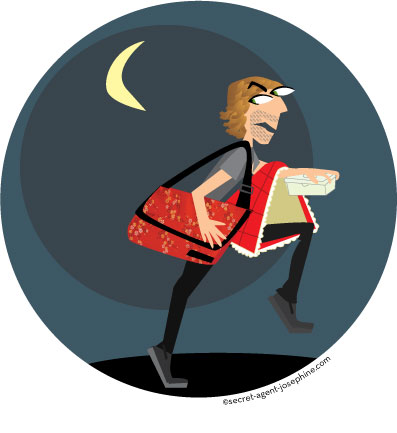 My car got broken into Saturday night. It happened while we were at home eating dinner not more than ten feet above where my car was parked. Our apartment is on the second story and we park our car below. Our windows were open, we should have heard someone or something. But it was Saturday night and we were having fun. We were not paying attention to the car below or what might be going on in the alley.

So it’s my own stupid fault for not locking my car. I’ve gotten out of the habit since I got the new car that has automatic everything. My old car had a locking system that I manually flipped as I closed the door. I was a fanatic about locking my car. Not any more. With the new car you just push a button on your keys and it beeps and locks. For some reason this is too hard for an idiot like me.

I’m always struggling to get Baby Bug out of her car seat and I throw my keys into the black hole that is my purse and next thing you know I’m upstairs and I’ve completely forgotten about it. We don’t usually keep much in the car and we have low jack so I’ve never really worried about it much. We also don’t live in the inner city or anywhere where cars get broken into often.

I’ve been thinking I need to get into the habit of locking my car but I just never got around to it. So now I’m getting around to it and I AM SORRY.

You know what the thief stole? My super expensive designer diaper bag that was a gift from one of Toby’s clients. I didn’t use it much. I kept it in the car because it was fancy and dry clean only but it was also a handy place to store a stash of extra diapers. It just stayed in the car and looked pretty. Not any more.

They also stole my big tub of wipes. Who steals a tub of wipes?!!! Either the thief has a kid or they like to keep their hands clean with wipes or something. Ugh. It just makes me mad.

There are some neighborhood boys that wander down our alley from time to time. Maybe five or six of them between the ages of twelve to seventeen. They wear their hair in their eyes and skinny pegged jeans. They’re too cool for school if you know what I mean.

We’re not especially friendly with them but sometimes we make eye contact. I try to smile because secretly they intimidate me and I don’t want them to know that. Once I asked them to leave because they were making noise hanging out downstairs and I was trying to get Baby Bug to take a nap.

Naturally, my small mind imagines that it’s one of those boys that broke into my car. It probably wasn’t but I just keep imagining one of them presenting their knocked-up girlfriend with my fancy red Chinese silk diaper bag filled with diapers and baby medicine and other handy supplies. How thoughtful she’ll think. How did you know I needed a baby thermometer? And what’s this? A stick of used roll on deodorant? I’m hoping she gets suspicious and knocks her loser boyfriend over the head.

But what really breaks my heart is that they stole a handmade quilt. This one. My Aunt made it. It’s really special because it’s red (my favorite color) and it has two different fabrics with two different textures because my Aunt is tricky and fun like that and she knows babies like to feel different textures. It’s also fuzzy on the other side. I don’t think it’s replaceable.

I kept it in my car so I would always remember to take it to the sticks with me so she would know how much we loved it. It was great for spreading on the floor at meeting (church). It just kills me that I didn’t think about someone taking it. Who takes a quilt?

I’m sure my Aunt (or even myself) could make another one (though she’s sworn off quilts for a while) but I don’t want her to. There is no replacement for that quilt. It was special. It was one of the first things my family gave me after I had been gone from them so long. (long story not to be gone into here)

So that’s where I’m at. Just blankety-blank-blank mad at myself. 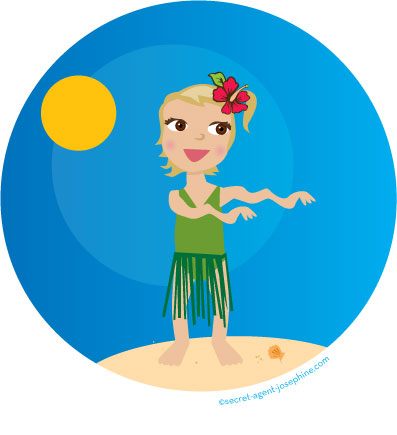 In other news we are going to Hawaii on Thursday. Can you believe it? I can’t either. How did this sneak up on me? I’ve never been to Hawaii. I should be excited right out of my skin. Remember Paris? Remember how I built up to it for nearly a year? I guess I’m a mom now and I just live day to day.

I hate to say this but I really love where we live. We go to the beach nearly every day. I know everyone says Hawaii is beautiful and I’ve seen the pictures… but what do they have that we don’t have here? I think I’m just being stupid. I’ll probably love Hawaii so much I’ll never want to come home.

I think what’s bothering me is that I’m secretly scared that I’m going to miss my daily check-ins with the internet. Toby says the wifi in the hotel is sketchy and you have to take your laptop to some weird corner on the top story to even just get one lousy bar of connection. I’m dreading that. How am I going to blog?!!!! How am I going upload my zillions of flickr pictures if the connection is slower than dial up!

I need to stop worrying about that and think about HAWAII!!!!

I’ve never been to Hawaii and I’ve always wanted to go. I even have family over there but I don’t think we’ll be visiting them since we will be stuck on Kona where Toby is shooting a house for his work. We’ll be stuck in the hotel a lot but from the photos on their website it looks like a pretty nice place to be stuck. Maybe I’ll even have time to teach Baby Bug how to swim in the hotel pool. I’ll have plenty of time since I’ll be going through internet withdrawals. And then there’s the black sand beaches and the Kona coffee fields and maybe a tour to visit a volcano or something.

It’s going to be a lot of fun for us. But what I really need is some input from you. We are going to Kona on the big island. Has anyone been there? Can you recommend anything besides scuba diving or surfing? Can you help me get excited?