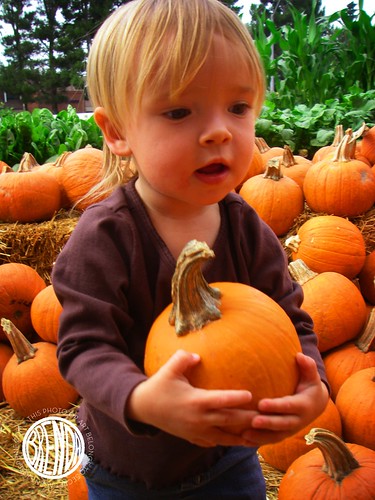 When did Halloween start being so fun? I’m supposed to hate Halloween! Laugh if you want but I have had a deep fear of vampires since I was eight years old. I watched some dumb movie at my neighborhood friend’s house down the street and I’ve had nightmare ever since. Sometimes still to this day, I will pull the covers up to my neck because I hate the feeling of cold air on my exposed neck. Don’t even get me started on how much I can’t stand scary commercials on tv. I’ve been known to just plain not watch tv for the whole month of October.

But now? I love Halloween! Maybe I should say I love the celebration of harvest and fall. I have fallen in love with pumpkins. They are so pleasing. What’s not to love! They are round and orange (one of my favorite colors) and you can carve faces into them. And then, the best part: you can throw them away! I love that. I really don’t like boxes of seasonal stuff that I have to find a place for. Ask my family. Not having a place for everything is almost as scary to me as my neck being exposed on a dark night. 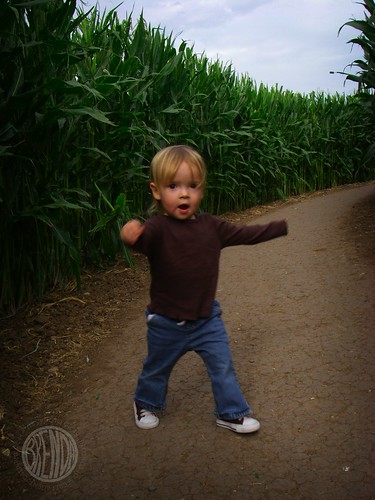 Baby Bug and I went to the pumpkin patch on Saturday. It was SO fun! I know it was kind of expensive but I shelled out twenty bucks and we did everything. We rode the wagon, we pet the sheep and the goats and a funny little hairy pig in the petting zoo. We ate shaved ice (green snow) and watched a pumpkin being blasted out of a cannon to a hill far away and smash into a thousand pieces. We ran around the corn maze that wasn’t really a maze but more of a labyrinth and examined every single dirt clod, rock and twig. It was the best thing for us. It was just so nice to be outside breathing air that doesn’t smell like a campfire for a change. 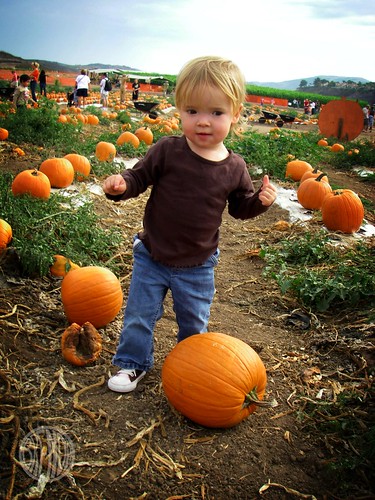 Of course we couldn’t leave without a pumpkin, even though we already have three at home from my Dad’s garden. I told myself not to buy another pumpkin but they called to me with their curly stems and big round tummies. I couldn’t just leave them there to rot. So we left with a big fat round one.

On the way to the car I had to carry Baby Bug on one hip and the pumpkin on the other. “It’s a good thing Mommy has big hips,” I said to Baby Bug as I hoisted her up. Then being the minor bird that she is Baby Bug said, “Good thing Baby has hips.” That gave me a laugh. She’s so funny. She copies everything I say. I should record her one of these days. I think I could get her to say the Gettysburg address if I wanted her to. 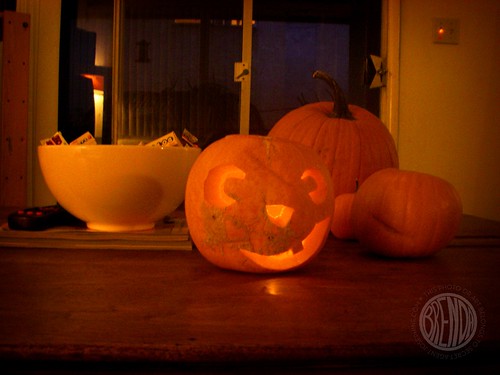 That night we carved one of our pumpkins and I introduced Baby Bug to the concept of trick or treating. She’s eaten cookies almost every day of her life but candy is a foreign concept. Let me just say, she caught on pretty quick. I don’t need to worry about her not knowing what to do with her special knitted pumpkin purse that Bethany Actually made for her. I think by Wednesday she will be showing other kids how it’s done. 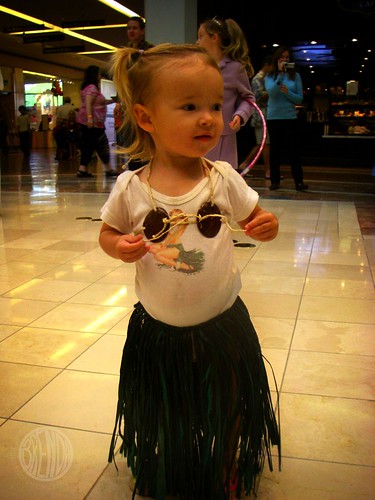 If spending a whole day at the pumpkin patch and then learning about candy wasn’t spoiling her enough, I decided to take her to the big mall on Sunday for their annual “Pumpkins and Pancakes” breakfast. It’s such a great event. For the cost of admission (which I don’t know what is because we have connections and got in free) you get a gourmet breakfast (catered by the same restaurant who catered my wedding), fun dancing time with a real dee jay (think chicken dance and the limbo), fun with a bazillion other kids in costumes and CRAFTS!!! 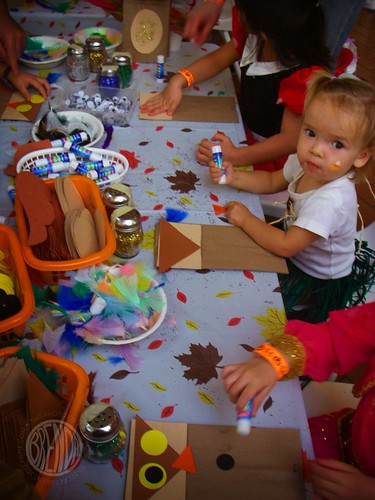 Baby Bug and I LOVE crafts. I was worried she wasn’t big enough to really participate, since all the other kids were twice her size and there were open containers of glue and paint and gooey stuff, but she was fine. She sat right there next to the big kids and painted and made her own owl puppet as if she did this sort of thing every day. 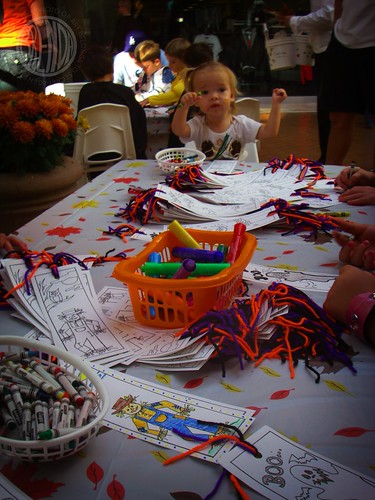 One mother turned to me and said, “Do you get a lot of comments from people about how small she is and how she can walk already?”

“Sure,” I answered. “But that’s not nearly as fun as the looks I get when she says the whole alphabet and then counts to fourteen.” Moms love me when I tell them that. I’m such a show off. But she can. She’s a nut like that.

I’m sure I’ll pay for this someday when Baby Bug is the littlest in her class and she comes crying home to me because all her friends can play on the monkey bars but she can’t reach them because the ladder is too low. I know because I was the littlest one once. It’s not all fun and games being small.

I thought Baby Bug would be so afraid when we went to the big event at the mall. There was loud music and big kids everywhere in scary costumes. I thought she’d be clinging to me for dear life, afraid of being stepped on. But nope. She wanted to be right there in the middle of it all. She’s like a chihuahua, she doesn’t even know she’s little.

Phew! I need to stop having so much fun. These posts are taking me forever to write.