Today was a really good day. You know why? Because I painted for three hours straight. It was dreamy. I love our new one-long-nap-a-day routine. It’s not like I’ve got Baby Bug on a rigid schedule, it’s more like I’ve got my expectations in line with her inner schedule. It took me a while to get here (and I’m sure I’m jinxing it by writing about it) but it sure is nice.

The trick to this new routine is to read Baby Bug’s low battery symbol correctly. When she starts getting cranky, her battery symbol is blinking. It’s a warning. But it doesn’t mean to put her down right that minute. It means I have about an hour left to go.

Toby hates this low battery stage. Baby Bug is cranky and cries at every little bump and scuff. If you take a crayon away from her, while she’s coloring a masterpiece on the wall, all hell will break lose. She’s just generally a crank to be around. But it isn’t worth putting her down yet because she will fight a nap like getting a tooth pulled. She’s just tired enough to be cranky and sour but not tired enough to think of sleep as something that will probably feel good.

Toby always asks me, “What’s wrong with her?” (as if I have some great motherly wisdom that knows all). I try to explain to him that her mood is directly related to where she is in her nap schedule. This is where I break out the graphs and charts… 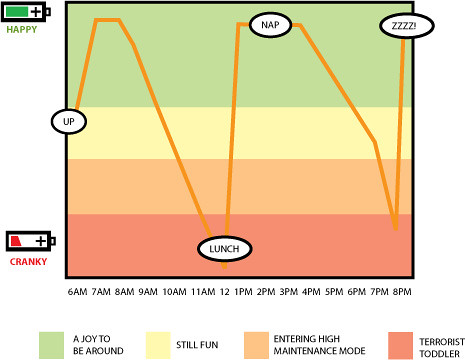 When she first wakes up she’s a little grumpy because she wakes up slow. About half an hour later she’s the sweetest baby ever. She laughs and plays and smiles at everything. This happy fun stage lasts for about two to three hours. Around that fourth hour, she starts to be a pessimist.

Putting flash cards in a box suddenly become incredibly frustrating and the baby that used to “try, try again” now wails and throws the cards on the floor in disgust. She doesn’t want apple juice or orange juice and when you tell her that it is NOT cookie time, she’ll throw herself on the floor and bemoan the weight of the world. The fourth hour toddler is not a fun toddler. She’s a pain in the neck.

Not every day but lately she’s been taking longer and longer naps. The other day she slept for four hours straight! I think she’s growing. Sometimes, I swear she’ll wake up looking taller. She’s getting to be such a big girl. 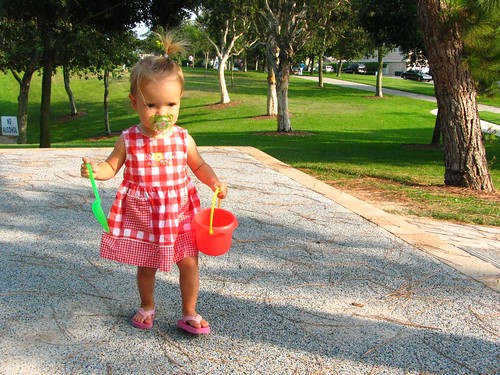 This picture was taken half an hour after a two hour nap. You can almost see the fully charged green battery symbol on her forehead. 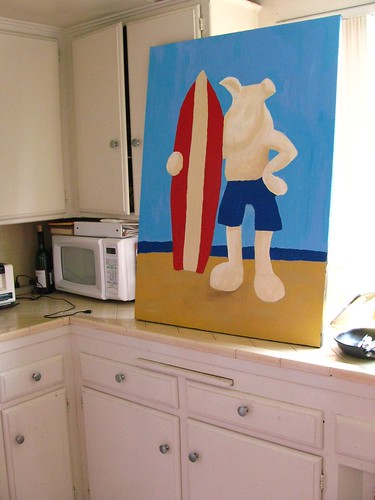 What? Doesn’t everybody keep half done paintings in their kitchen next to the dirty dishes? No? Oh, okay. Well, this one is here because I had to quick put it up somewhere before Baby Bug woke up from her nap and decided it would be really fun to stick her fingers in the wet sticky paint.

She wants to paint like me so bad. I don’t blame her. Painting is fun and even more fun if someone is constantly telling you that you can’t. One of these days I think I’ll coral her on the patio, cover everything with plastic and let her go crazy on the back of one of my canvasses. Who knows, a Baby Bug hand print might add value.

The big paintings have this really awful logo on the back of them because they used to be hotel art that my friend bought for me from Ross and I painted over them. On the back, next to the $199 price sticker marked down to $4.99, they say something like “hand painted by Michael McEightiesGuy”. I’m thinking I need to paint over that with something cute like a giant dog head or maybe some hand prints a la Baby Bug.