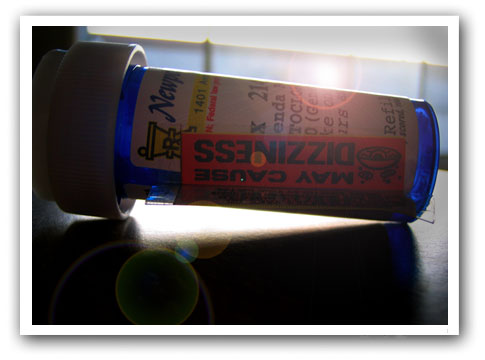 I’m back. I don’t even know where to start without sounding like an old person in a retirement home. I don’t want to ramble on about my many ailments but that’s what’s been going on. I got sick. Really really sick and now I seem to have the mystery illness that thankfully I finally saw a proper doctor about today. As opposed to an ER doctor (Ugh. The ER. That was like the nine circles of Dante’s Inferno. Should I even bother blogging about that?) Hopefully by next Wednesday we’ll have a real diagnosis or I’ll magically be better. Magically better would be great.

Right now I’m feeling pretty good. But I said that yesterday and ended up spitting out all my words into the toilet. I hate puking. Hate it hate it hate it. I’ve been doing a lot of it. I would say that I could declare this year “the year of the puke”. As I never used to puke. But then I got pregnant and had morning sickness. That was a joy. Then I went on a boat and got sea sick. Joy joy. Then I got this mystery illness and it’s been a triple threat of joydom.

I have some theories about what might be wrong with me. I caught the cold. The giant sinus-snauctopus. Then I was doing a lot of freelance work at night and drinking coffee after nine-o-clock at night, which I never do. I think between trying to be the super mom with the new master chore list in the day time and the freelance designer at night I forgot to drink enough water. Like maybe I forgot to drink water for a whole day or maybe two. I’m a nursing mother, a really really stupid one. I was sick with a cold and then I got dehydrated and then Then THEN I decided to have “new recipe night” and I fixed something strange and foreign and I think I gave myself food poisoning.

So anyway… I’m back from the sticks. (That’s where I’ve been since Sunday… sans laptop and phone). My mom brought me home today and I saw a proper doctor. My new is doctor really nice and smart as a whip. I think she’ll get to the bottom of it. She ruled out a lot of things we thought it might be, like kidney failure or appendicitis or some kind of bowl blockage… She thinks it’s most likely a virus gone terribly wrong. Possibly something wrong with my gallbladder, possibly kidney stones, possibly a pulled stomach muscle or possibly an infection but most likely it’s just a really really bad virus. I have an abdomen ultrasound next Wednesday. She’s being very thorough.

How’s Baby Bug you’re wondering? Fine. She’s such a little scrap. She didn’t get sick a bit. (Thank you Lord! I think I would have lost my mind if we were both sick and my mind was very close to being lost already.) In fact I think she doubled her healthiness and added a whole extra dose of wiggliness to her repertoire of tricks. She is just non-stop activity these days. In the first days I was sick I just lay on the floor and let her crawl all over me. It was all I could do. I couldn’t even think straight. That’s why my mom had to come rescue me. Toby keeps talking about us moving up north and I really really want to move but the thought of being away from my safety net of family makes me very afraid. I would be lost without my family.

For the first time ever Baby Bug had to be taken care of by somebody else besides me. Grandma rocked her to sleep every night. When she woke up crying in the night, her Auntie CC got up and put her in bed with her. Auntie CC also fed her baby food and dressed her and changed her and pretty much played “Mom” when she wasn’t working. Baby Bug went out to dinner with my family and learned to love to eat Mexican food (while I stayed home groaning on the couch or puking). Her cousins played with her in the daytime. Uncle Chaos used his vulcan mind meld on her and put her to sleep for her nap times. My brother is amazing with babies. All he does is pick them up in his great big burly arms and they magically fall asleep. Every time. He was a lifesaver. They all were. I didn’t mention my Dad because he has a new job and is gone all day long but I can’t leave him out. There’s something about my Dad that just makes me feel better. Maybe because he just worries about me so much. He called to check on me daily from his job. At night after everyone was asleep he came to check on me and told me how worried he was. I love my Dad. I love them all.

But you already know that.