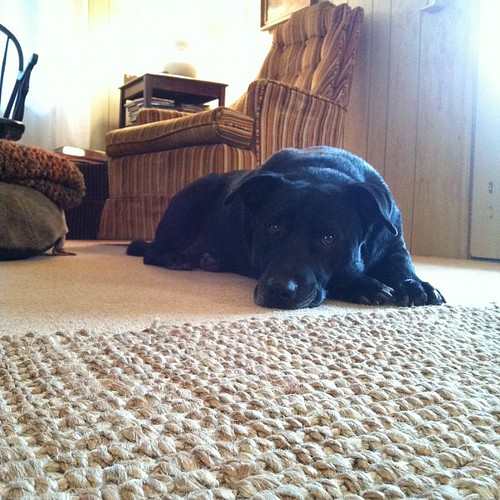 Yesterday as we were putzing around getting ready for our weekly trip to Orange County so Bug could attend her ballet and gymnastics classes and I could do a photography shoot I have scheduled, we had a great idea. What if we brought Holly with us? Usually I take her to my mom’s because she is a spoiled rotten dog and she doesn’t like to be left alone in the backyard by herself over night even if the neighbors check on her. No. She likes to sleep with the humans in the nice cozy warm house. She’s not dumb.

Toby is out of town but he gave us permission to stay at his place at the beach and bring Holly with us. The adventure was on! We piled her in the car with all our overnight luggage and we were off. It’s an hour-and-a-half drive so I was a tiny bit curious how she would do.

She was such good dog. I wish she could talk so we could hear what she was thinking as she watched out the window silently. She’s never been on such a long trip I don’t think. She’s lived her whole life in my mom’s yard until she moved in with us. I imagine the freeways blew her mind but she didn’t even seem to raise an eyebrow. She’s just such a mellow dog. 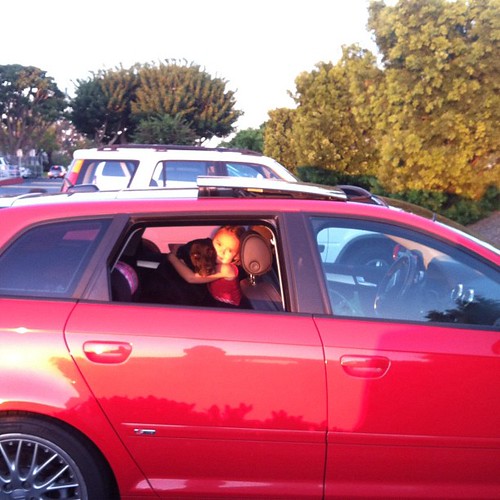 She stayed in the car during ballet and gymnastics with me checking on her every few minutes. She didn’t even seem to mind the airplanes flying over. They are super loud because Bug’s gym is right next to the airport.

After gymnastics and ballet we took Holly right to the beach and caught the tail end of sunset. I didn’t get any photos though. It was too dark.

It was so fun to watch her sniff the sand and then take off down the beach chasing a bird. She’s a funny dog. She is a labrador and labs are supposed to like water but she doesn’t! She hates water! If you turn on the hose or try to get her to take a bath she’ll run the other way. So the I was quite curious to see how she’d like the ocean. And in true Holly fashion she seemed completely indifferent. Nothing seems to ruffle her. Not even a cow-sized great dane that walked by. Funny funny Holly. How we love her mellow soul so.

After walking up and down the beach in the dark we took her home to Toby’s to see how the cat’s would react to her. I didn’t get any photos again (because it was dark and you know how I feel about taking pictures with the automatic flash). We were worried that Pounce would freak out. He’s such a high strung cat. He didn’t like her but since Holly just stood there looking at him and showed no real reaction, Pounce got over it. Lily hid for a bit but now a day later they are all chilling in their respective spots and seem to be just fine. 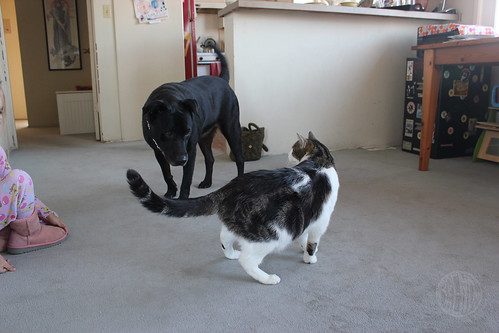 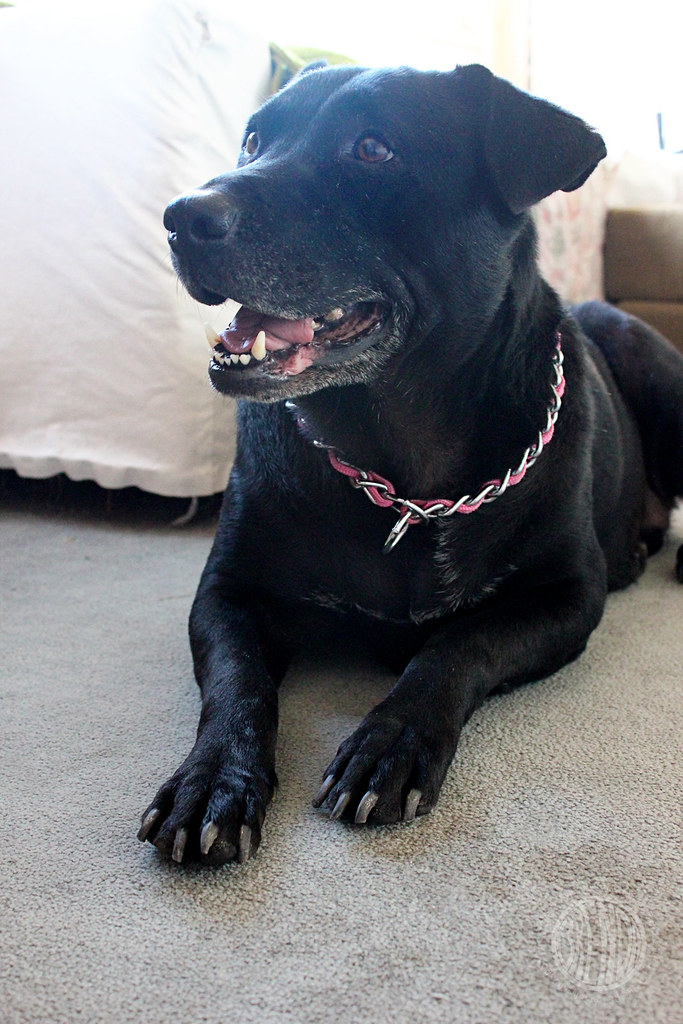 The next morning both Bug and I were up at the crack of dawn full of excitement to take Holly to the beach. Our old beach town is such a dog town. There are water bowls and treats out at most of the stores along the highway just waiting for patrons to walk in with their dogs. So of course we had to take Holly to the nearby doughnut shop so I could get a latte and Bug could get a bagel. 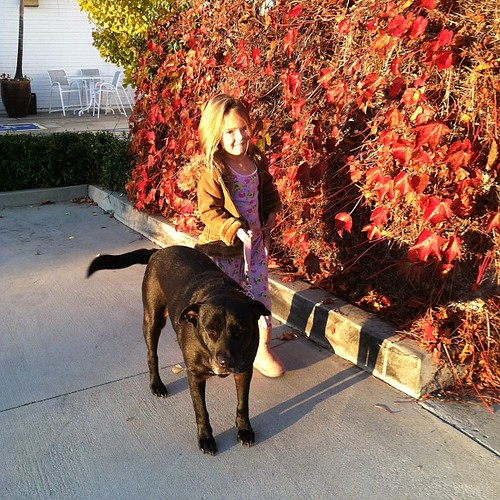 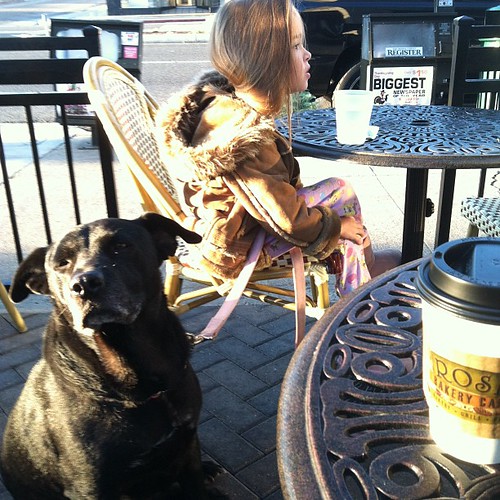 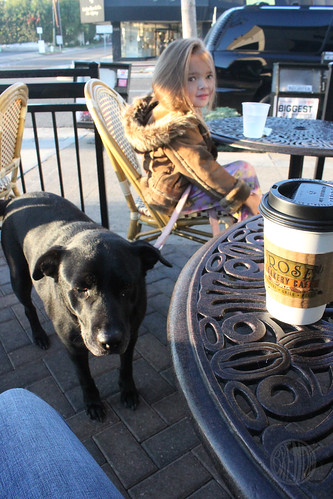 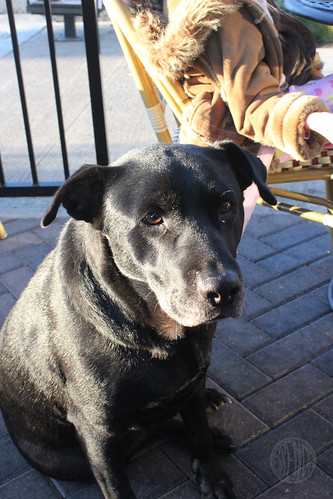 She fit right in.

Then back to the house to get bags (for poop, which we didn’t need afterall) and my camera! 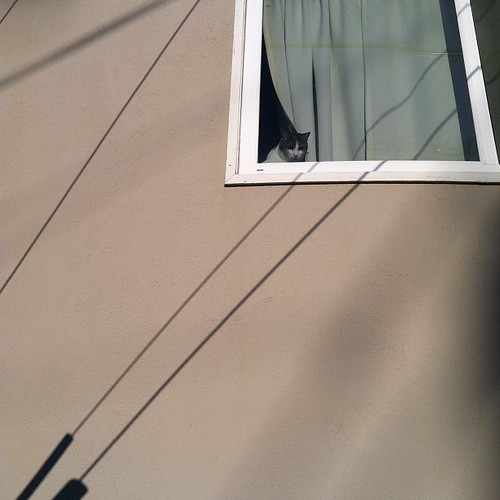 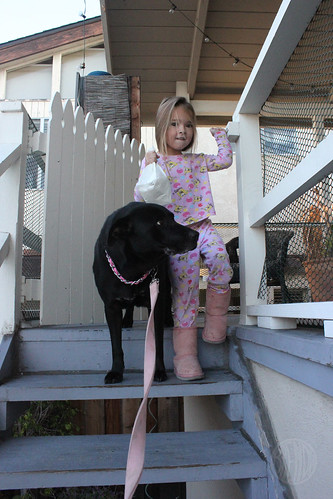 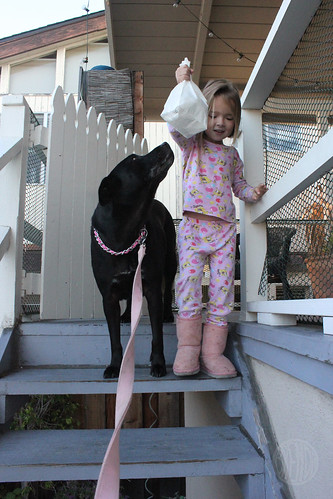 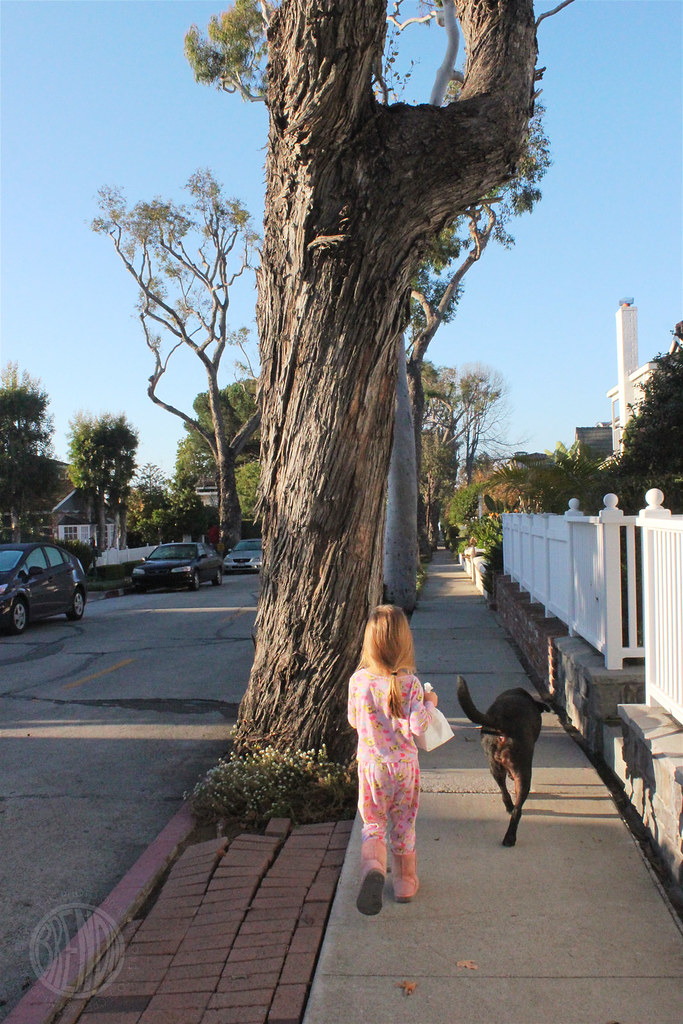 And then down to the beach. The old familiar route was fun and new again with somebody new! 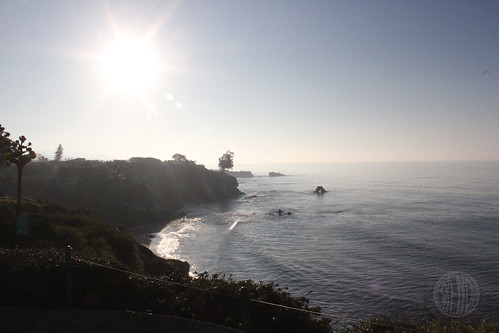 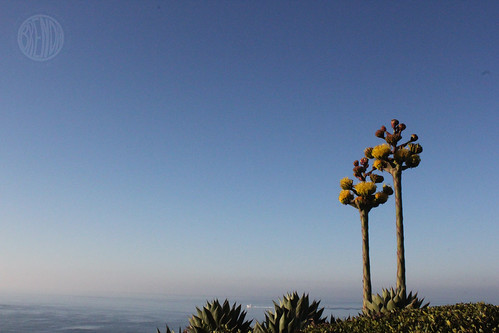 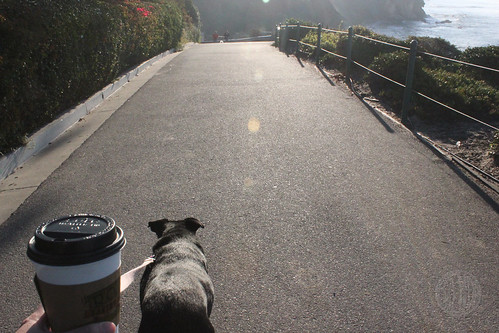 I could get used to this dog-walking business. Maybe we’ll have to find a place that accepts dogs when we move back… 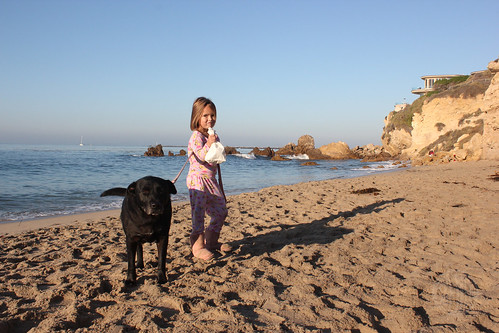 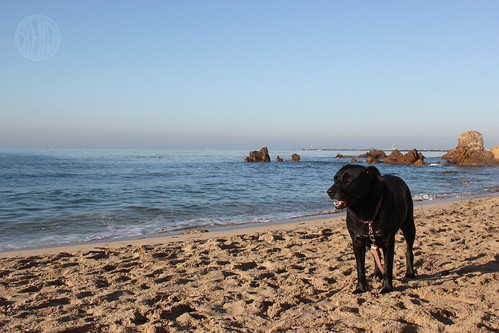 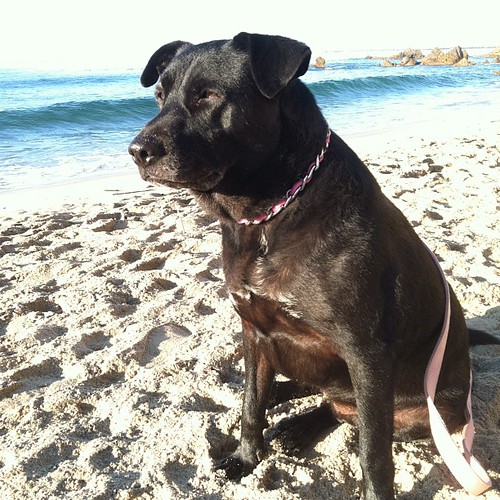 Sighs of contentment all around. 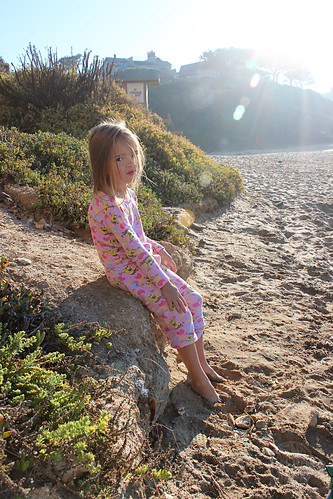 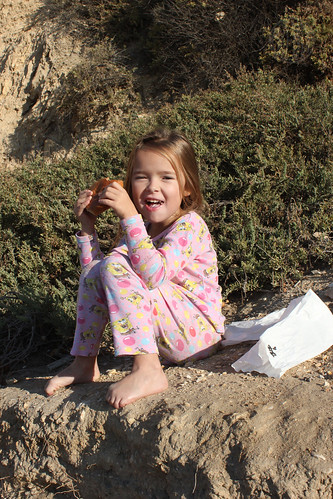 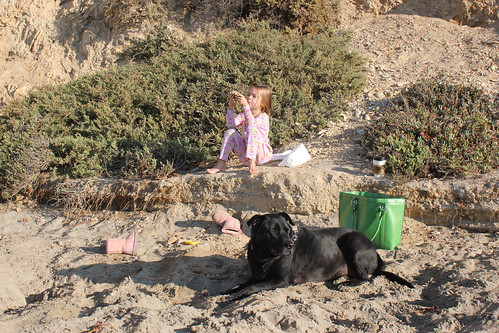 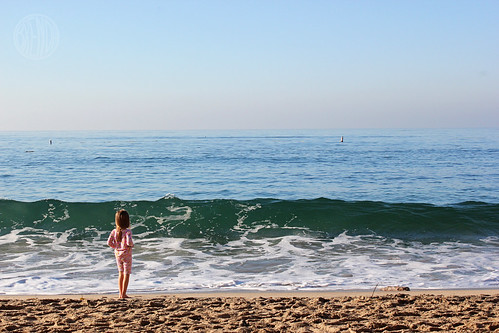 Bug got her feet wet but not Holly. She was perfectly content to sit with me on the sand, looking on. 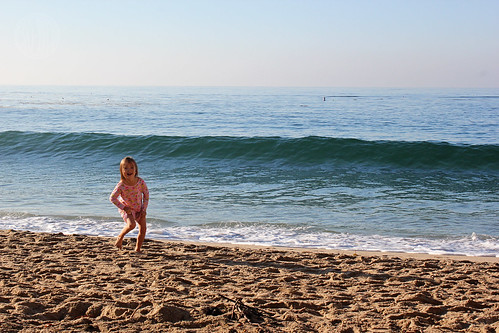 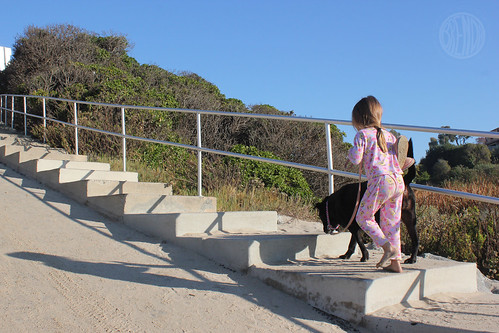 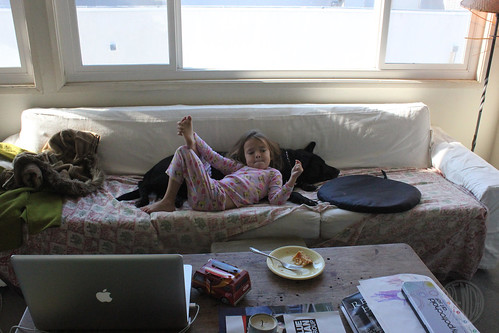 But that’s okay because home is where Holly loves to be anyway. 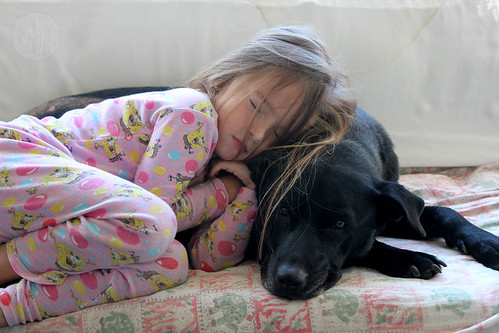 Wherever the people are is where she wants to be.