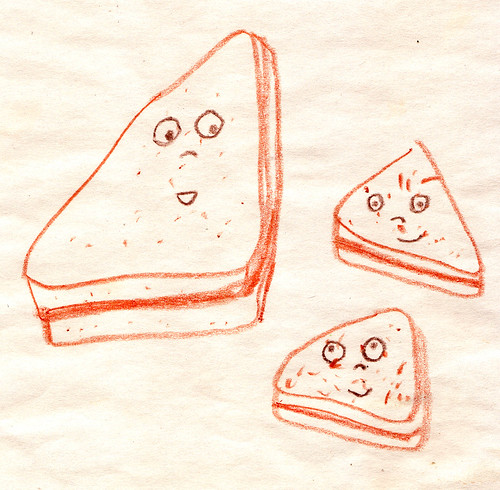 The other day I was making Bug her usual Peanut Butter and Nutella sandwich. (Yes, I know Nutella has four tablespoons of sugar in one spoonful. Gah!) Bug was sitting on the counter next to me, watching and chattering on as she is wont to do.

Everything was going along fine until I got to the cutting part. I cut the sandwich in half and then was about to cut it in half again to make four small triangles when she burst out crying, saying that I wasn’t doing it right. She didn’t want four little triangles. She wanted BIG triangles like her cousin Rapunzel makes.

Sheesh! Kids are so demanding. As if sandwich shapes makes them taste different.

What could I do? One half was already cut? I did what any mother would do. I pretended the big triangle was the mommy sandwich and the two little triangles were the baby sandwiches and made them talk to each other as they waddled on their corners along my paper towel work-space onto her plate.

Then there were tears.

“I can’t eat them! I don’t want to eat the Mommy and Baby sandwiches!!!” Waaaah waaaah wahhhh waaaaaah!!! Tears, tears, tears. “Make me another sandwich so I can just look at these sandwiches!”

I tried and tried to tell her the sandwiches wanted to go to the party in her tummy but nothing really worked. She was a crying snotty mess—the usual hungry-needing-a-nap-growth-spurt routine of late. I know a lot of parents would just say suck it up or go hungry and I probably should have. But I finally worked it out for her by drawing a sketch of a mommy sandwich and some baby sandwiches that she could keep and that consoled her. Now we have a sketch of sandwiches permanently living in our house.

Lesson of the day: Never anthropomorphize your kid’s food. 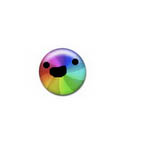 Everyone probably already knows about this site but I just recently found it and have been laughing ever since. I need more laughs. Spied via Whoorl.