posted in domesticity, Slow News Day, Stealthy Spy Cooking on May 18, 2010 by SAJ 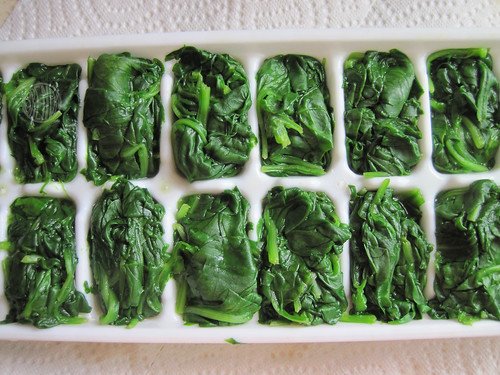 My life is so boring right now I’m going to blog about making spinach cubes. I know. I hate to blow the air of mystery I have around here but seriously, I’ve got nothin’ going on. It’s just parks and grocery shopping day in and day out. If I’m not counting to one thousand while I push Bug on the swing then I’m probably writing up a grocery list and plotting how I’m going to zig-zag across town getting the best deal on groceries.

The highlight of my week this week was going to the local Persian market and buying a giant pillowcase-sized bag of raw spinach. I’m not kidding! The bag was so huge I should have taken a picture. I didn’t want a bag that big. I wanted one one-fifth the size but they didn’t have any and the GIGANTIC one was only $3.49. I must have wheeled my rusty metal grocery cart up and down the crowded narrow aisles of that market eight times trying to weigh whether or not I could actually use as much spinach as a small restaurant.

In the end I decided I could. I figured I’d call up my neighbor and give her some. I’d eat probably a quarter of the bag raw and then cook the rest. Cooking spinach is like some kind of circus show where the clowns pile into an impossibly small car. You can add handful after handful of raw spinach to a boiling pot of water and it just magically disappears. My mom says there is a great debate over whether raw spinach is more healthy than cooked and now I know why. You are probably getting 10 times the amount of vitamins when you eat it cooked simply because it condenses down to such a small size. Five bowls raw probably equals one bite cooked. It’s pretty amazing. 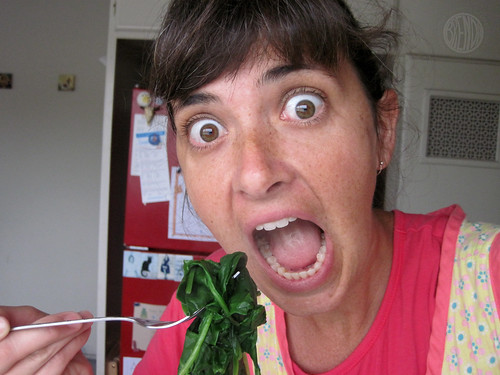 Of course, enjoying cooked spinach is probably key. Which I do. I don’t love it but it’s not bad. I especially like it drenched in lemon juice. Lately, what I’ve been doing with my raw spinach (and the reason I was buying it in the first place) is making smoothies. Cheeky Lotus Shakes to be specific. I don’t know if this diet works. I can’t stay on it long enough to tell you but I can say that I like drinking super-healthy smoothies after I’ve binged on Pop-Tarts for a week. Nothing soothes a bloated tummy and a guilty conscience better than a delicious fruit smoothie packed with ground flax seeds and raw spinach. 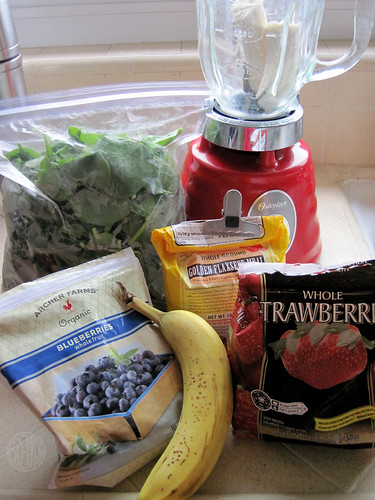 I know a lot of people will think this breakfast is disgusting and it is if you think about it too hard. But you don’t taste the spinach at all. Everything is sweet. Blended bananas cover a multitude of healthy fibery things. The texture is funny but I’m not one of those people who is bothered overly much by textures. I’m weird that way. 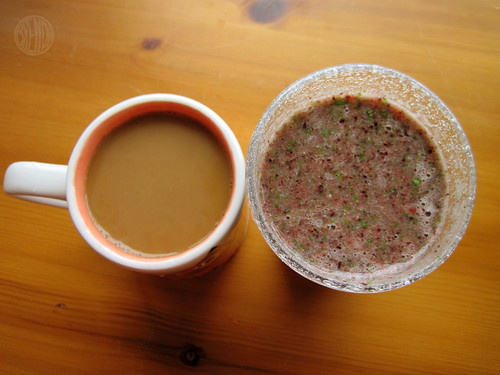 So that is my breakfast. A smoothie (or shake) and my big cup of coffee. And now you know why I made spinach ice cubes. Because I want to use them in my shakes. I can’t tell you how they tasted yet because today is Pop-Tart day but I’m sure I’ll be able to let you know by the end of next week when my third-of-a-pillowcase-sized bag of raw spinach runs out or gets slimy.