So that was fun, all those events at the libraries. Bug and I have visited more libraries in this week than we have in months! I’ve got the books to prove it. Good thing they’re all in the same network and I can just return them at our local library.

We loved the balloon show. It was almost as fun as the science show, which says a lot since the science show had forces and vortexes and magical water molecules that kept showing up in a silver decanter that never ran out of water. But this show had a GIANT balloon. It was so big, the storyteller blew it up with a leaf blower and then climbed inside of it (all to the suspenseful tune of the 1812 Overture)! It blew (ha ha) our minds. 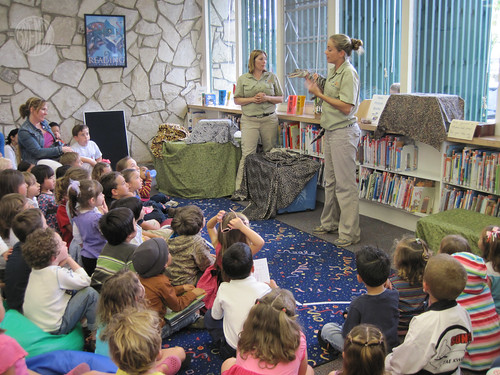 Next up there was a Mighty Rainforest Animal Show! It was pretty cool. I really wish I could rattle off all the names of the animals we saw but my dinosaur laptop is dying and google takes me about a million years to bring up even one page. It’s that sad.

Don’t be surprised if one of these days I just disappear because I chucked my laptop out the window and I no longer have anywhere to post from. I guess I could always use a library computer but I tried that the other day and half my links were broken due to the library not supporting flickr. Harumph.

But whatever! I’m online now and there animals animals to post about! 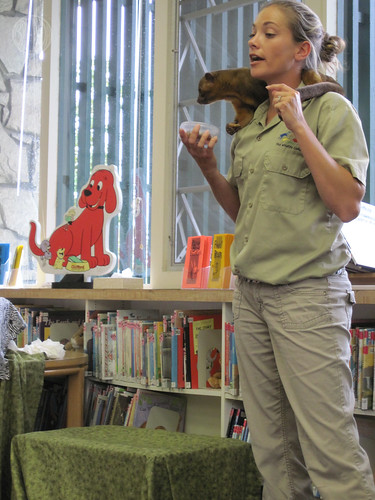 This one was the cutest one. Not the girl. The fuzzy guy on her shoulder. But yes, Bre “the animal lady,” was cute too. She called it a “peek-ka-chu” but every time I try to look it up on the internet to see what it really is, I keep finding pages for Pokeman and you know how well that is going with this dying laptop. So if you know what this nectar-eating mammal is, please educate us in the comments. 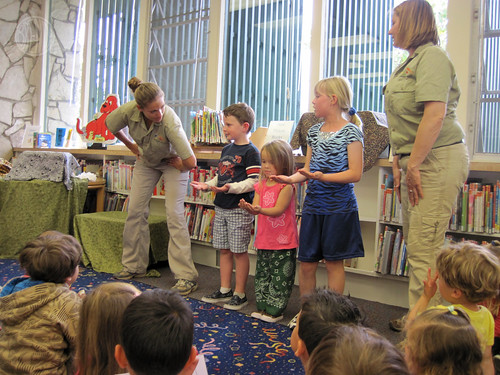 The best part was when Bug got to be a volunteer. This week has been a bit challenging for her because she is so small for her age. She’s smart enough to know the answers to questions and participate but a lot of the time the show performers didn’t call on her because she looks like she’s two instead of four. So she got passed over many times which broke her poor nap-needing, low-blood-sugared heart. BUT at last she got chosen to be a “tree” up on the make-shift taped-off stage.

It was kind of funny because Bre, the animal lady, said that her snake was just a “little” snake because she was afraid of snakes. So we were all expecting something about six inches long and then she reached into one of her fake animal skin-covered bins and extracted a giant twelve-foot, scary-looking snake that I also don’t remember the name of. (Arg!) 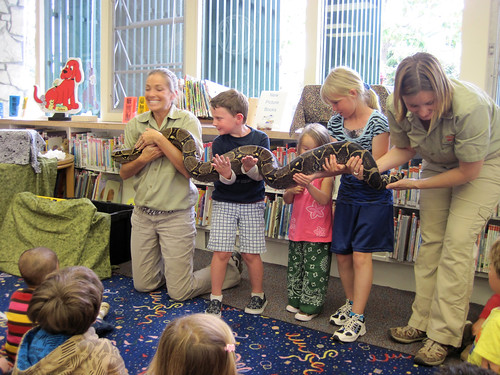 Bug ended up being a little scared after all even though she had promised Bre that she would be brave. But Bug didn’t run from the snake crying. She just sort of stood there and touched his underbelly with one finger instead of holding out both arms like she was supposed to. Thankfully, because she looks like she’s two instead of four, everyone thought she was cute and didn’t boo her off the stage.

I was proud of her. After that we escaped the small cramped library and took a break because it was super crowded and the kids were more restless than the animals. But we went back later and told the librarians how much we liked the show. Because we really did. Even if I can’t remember the animal names and we are sort of afraid to hold GIANT twelve foot snakes.